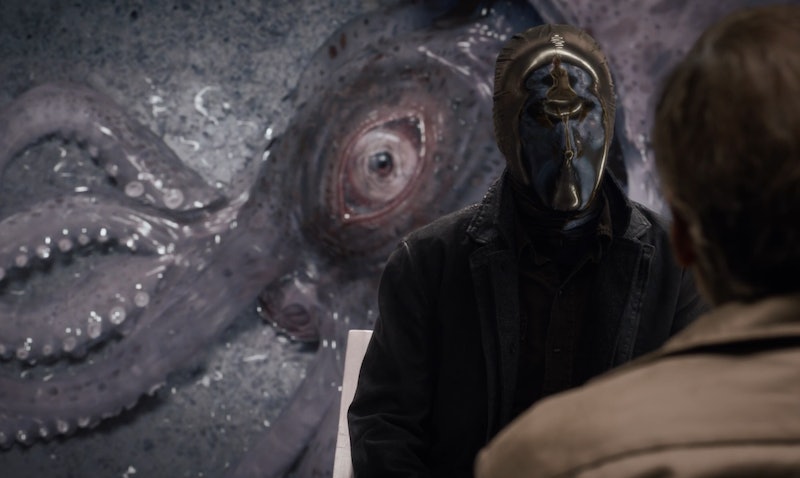 Spoilers ahead for HBO's Watchmen. In the alternate reality of Watchmen, it rains squid. They're gross, but the squids in Watchmen are a commonplace occurrence for Regina King's Angela, who nonchalantly pulls her car over to wipe them off of her window shield. But since they weren't in the faithful 2009 film adaptation of Alan Moore and Dave Gibbons' comic, fans of the movies and newbies to this universe might be a little confused as to why tiny squid are falling from the sky, yet understanding the squids is key to understanding the world established in the Watchmen comics. Not to mention that their existence could become a major plot point on the HBO series.

To understand the raining squids, you have to go back to what happened back in 1985 in the comics. Walter Kovacs' Rorschach was investigating the death of The Comedian, one of Rorschach's fellow vigilantes before superheroes were outlawed. Along with Daniel Dreiberg's Nite Owl II, Rorschach unearthed a vast conspiracy orchestrated by another former superhero — Adrian Veidt's Ozymandias.

In order to stop the United States and Russia from entering into nuclear war, the highly-intelligent and wealthy Veidt concocted a plan to distract humanity with another threat. Via cloning, he created a giant telepathic squid-like creature to make people believe the world was under an alien invasion. On Nov. 2, 1985, Veidt teleported the squid to New York City where it exploded and its psychic shockwaves killed half of the city through physical destruction, shock, or insanity — far scarier than the traffic inconvenience those small earthbound squid caused in the Watchmen premiere.

While Ozymandias did stop nuclear war, he did so by gaslighting an entire planet and murdering 3 million people... with squid. He showed no remorse when his former colleagues Rorschach, Nite Owl, Dr. Manhattan, and Laurie Jupiter's Silk Spectre II confronted him at his Antarctica hideout, Karnak. Instead, he believed his actions were for the greater good and he celebrated his success as bringing the world one step closer to utopia — all important characteristics to keep in mind as you watch Watchmen since Jeremy Irons' character is widely presumed to be Veidt in 2019.

To keep peace between the nations on Earth, Dr. Manhattan, Silver Spectre, and Nite Owl agreed to go along with Veidt's fake alien story. Only Rorschach wouldn't accept the fabrication and was hellbent on exposing the truth. To stop him from ruining the tentative peace, Dr. Manhattan disintegrated him. Before his death, Rorschach sent his journal to the conservative publication New Frontiersman where he had theorized about Veidt's plan.

While the premiere episode of the TV series didn't include much info about the squids, HBO has provided supplemental materials via the fake database Peteypedia. In one document, a yet-to-be-seen character — Agent Dale Petey of the FBI's Anti-Vigilante Task Force — gives some context on where the world stands after the 1985 attack. In a memo, he outlines how Rorschach's journal was eventually published and only extreme radicals believe his claim that Veidt created the monster. The majority of people — including the government — think Earth really was attacked by aliens in 1985. This helps explains why Looking Glass asked the suspected Seventh Kalvary member, "Do you believe that transdimensional attacks are hoaxes staged by the U.S. government?"

According to the documents on the Peteypedia, the attack is formally known as the Dimensional Incursion Event, D.I.E., and the squid is referred to as E.D.B.E. (no explanation of the acronym is given). Petey wrote that following the D.I.E., the world became consumed with wondering if another alien attack would occur — "a threat kept top of mind by random downpours of fetal cephalopods that no one with a credible physics degree has ever been able to explain." So the raining squids are a continuation of this hoax alien invasion — possibly still led by Veidt as a way to keep humanity in line.

As for the people who know the truth, a newspaper in the pilot episode declared that Veidt was dead. (You can read his obituary on the Peteypedia.) While the world at large may believe that, the existence of Irons' character indicates it's another falsehood. Veidt would never expose his massive lie, but another comic character who will appear on the HBO series is Jean Smart's Laurie Blake. More than 30 years have gone by, but as Silver Spectre II, Laurie was there in Antarctica when Veidt confessed to fabricating the entire alien invasion of 1985.

With Laurie and Veidt still alive, Dr. Manhattan on Mars, and Nite Owl II's whereabouts unknown, it's possible that Veidt's alien hoax could be exposed on Watchmen. But for now, most of humanity will continue to buy into the elaborate lie as ominous squids to continue to fall down upon them.