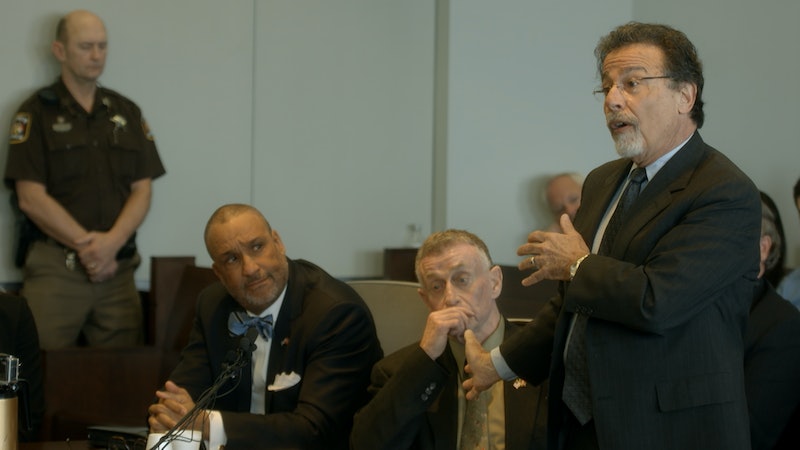 Despite fitting neatly into 13 episodes, the story of The Staircase spans nearly 15 years. Towards the end of the final episode of The Staircase docuseries on Netflix, the judge who presided over the Michael Peterson trial reflected on his decade-plus history with the case. Judge Orlando Hudson's comments on The Staircase indicate that his views on the case have evolved over the years.

Now a Senior Resident Superior Court Judge in Durham County, North Carolina, Hudson sentenced Peterson to life in prison in 2003 after he had been found guilty of first-degree murder of his wife, Kathleen Peterson, per The News & Observer. Hudson also ruled in 2011 that Peterson should be allowed to have a new trial, following the revelation that the jury in the 2003 case had possibly been misled about blood evidence, per CNN. It seems that Hudson's involvement in the fate of Michael Peterson finally came to an end following Peterson's plea hearing in 2017, in which Peterson entered an Alford plea to a charge of voluntary manslaughter, as CBS reports. An Alford plea allows Peterson to maintain his innocence, while also acknowledging that the prosecution has sufficient evidence to convict him.

In an interview with the filmmakers who've been documenting Peterson's 16-year legal ordeal, Judge Hudson says, "Although he spent eight years in prison, maybe time that he should not have spent, certainly his conviction was reversed. That is very strong evidence that the criminal justice system does work."

Hudson also tells the filmmakers, "I thought the jury got the case fairly which meant that [the jury] got the evidence that both parties wanted them to have." However, the judge has reconsidered whether some of that evidence should have been a part of the case at all.

While Hudson seems to affirm that the criminal justice system managed to right its wrongs by the end of Peterson's story, he is looking back at his own choices with some criticism.

"Over the years, though, you can see how with time and more examination of the evidence that did come in how, maybe, [the case] wasn’t without prejudice," he says in documentary. "And so if you get a chance to do it over again, which I certainly would’ve gotten that chance, there were things that I would’ve changed." Seemingly, he's referring to the possibility that Peterson would have been re-tried, were it, had he not reached the plea deal with the prosecution.

When Peterson's lawyers appealed the 2003 verdict in 2008, they argued that evidence regarding the 1985 death of Peterson's friend Elizabeth Ratliff in Germany and his bisexuality should not have been allowed to be presented during the original trial, among other arguments. However, the appeal was rejected. The North Carolina Court of Appeals found that "the state presented overwhelming evidence of defendant's guilt, independent and separate from the tainted evidence, no reversible error occurred," per WRAL.

The appeal failed, but Hudson appears in his Staircase interview to agree with the defense on some of those points. He says:

"I think over time the introduction of the death in Germany was very prejudicial to the defendant. I thought that all the homosexual evidence, however it was used, would’ve been unduly prejudicial to the defense and probably shouldn’t have come into evidence and I believe ultimately a fair, and reasonable juror could make a different decision than was made by that first jury."

So does Hudson believe that Peterson is innocent or guilty? He doesn't explicitly state his thoughts on that. "I think I could’ve had a reasonable doubt,” he concludes, however, putting himself into the jury's shoes. If the trial had gone differently, would there have been a different verdict? Judge Hudson's remarks add another layer of uncertainty to this fascinating and exhausting case.