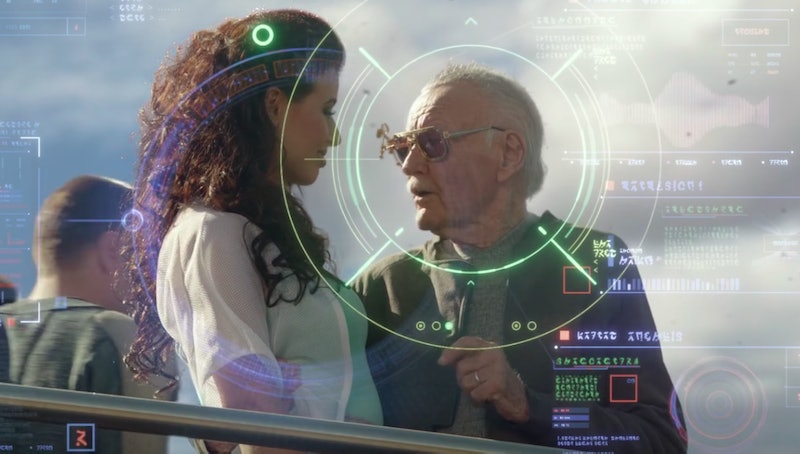 Despite the Marvel Cinematic Universe existing, not every Marvel movie is connected narratively. Marvel properties adapted into blockbusters haven't always been at the same studio, or under the same creative umbrella, but they have all been connected by one thing: Stan Lee cameos. Lee, former Marvel President, has appeared in nearly every single movie based on a Marvel property, including Guardians of the Galaxy. Normally, Lee's cameos are just small gags, like when he played a FedEx delivery man at the end of Captain America: Civil War, but now it looks like Stan Lee's cameo in Guardians of the Galaxy Vol. 2 might confirm a huge fan theory, with impacts to the entire MCU.

In Guardians of the Galaxy Vol. 2, Lee appears twice — spoilers ahead. First, mid-way through the film, he is seen sitting with a group of Watchers as Yondu and Rocket fly by. In typical Lee fashion, the man is in full story-telling mode, telling the other Watchers about his adventures on Earth acting as a FedEx delivery man. Lee also appears later in one of the five (yes, five) post-credits scenes. In that scene, he's still talking, but his audience is getting increasingly bored. But, Lee's appearance in the post-credits scene isn't what will have fans excited. No, what will have fans talking is the fact that Lee's cameo in Guardians of the Galaxy Vol. 2 seems to confirm the theory that Lee is a Watcher.

In GOTG 2, Lee appears to be reprising his role from Civil War. But how would a FedEx employee end up on a moon in outer space? Well, if he's a Watcher, then Lee could be anywhere. In Marvel comics, Watchers are omnipresent, alien beings who observe events going on in the galaxy. They witness major events, but do not interfere. Fans have long suspected that Lee's constant presence throughout the MCU wasn't just a fun little gag for fans, but proof that he was really a Watcher. And, according to Gamespot, most fans suspect Lee is playing Uatu, a Watcher best known for keeping an eye on Earth.

Of course, Lee's cameo in GOTG 2 could just be a nice acknowledgement of this fan theory. Or it could be writer-director James Gunn's way of pranking fans. (If there's any movie that would be able to make a joke out of Lee's constant cameos, it's a Guardians of the Galaxy movie.) If the icon really is intended to be a Watcher in the MCU, it explains why various versions of him pop up within the same Universe right at the time of a major event or battle. However, Lee's role as a Watcher could also open up some plot holes, like why he appeared in The Amazing Spider-Man, a film that features an entirely different Peter Parker than the one currently in the MCU.

The decision to make Lee a Watcher in the MCU, if it's really happening, would have had to have been made pretty recently. Marvel Studios President Kevin Feige admitted at a press conference that he debated whether or not to keep the FedEx line in (aka the line that makes the connection), according to a report by Geek Tyrant. Given the debate over whether or not to develop Lee's cameo in GOTG 2, it looks like the Marvel powers that be don't have any intention of making Lee's role in the MCU any bigger than it already is. Nor does it seem like the Watchers are going to play a significant role in the franchise going forward. Still, I think all Marvel fans will agree that of all Lee's MCU cameos, this one could be the biggest Easter Egg of them all.