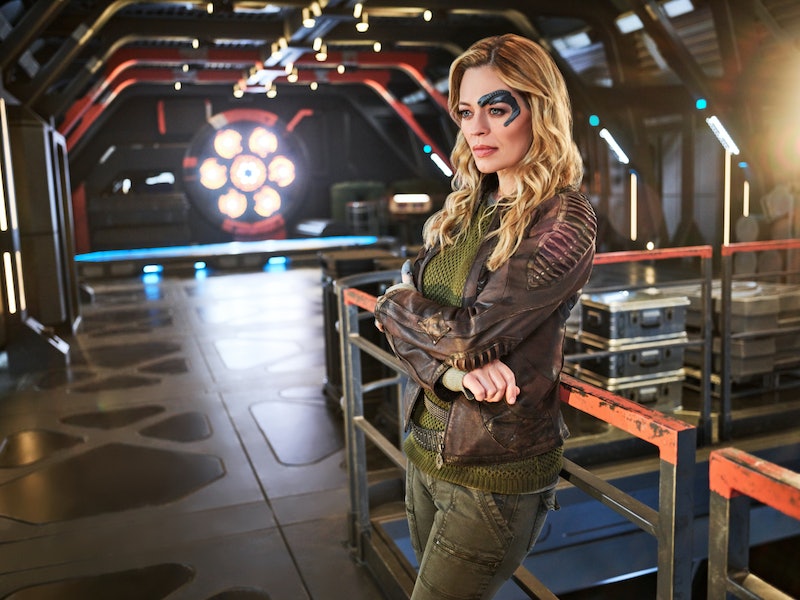 Star Trek: Picard is beaming onto our TV screens soon, and the show will feature some cameos from beloved Star Trek: The Next Generation characters like Data (Brent Spiner), Deanna Troi (Marina Sirtis) and William T. Riker (Jonathan Frakes). At the 2019 San Diego Comic Con, it was also revealed that Hugh (Jonathan Del Arco) and Voyager's Seven of Nine (Jeri Ryan) will join The Star Trek: Picard cast — meaning Picard's main antagonists The Borg (a cyborg hive mind) are back. But they may not be exactly the same villains he once knew.

Picard's complex relationship with the Borg is best explored in The Next Generation Season 3 finale, "The Best of Both Worlds." In it, Picard is captured and assimilated into the Borg Collective, enduring torture and nearly losing all of his humanity. While Picard is eventually rescued by his crew, the trauma from the incident remains, which explains Picard's militant responses to Borg attacks in subsequent episodes and films.

Season 5's "I, Borg," however, challenges all of Picard's previously held assumptions. He meets a Borg named Hugh, who retains some shred of individuality even while being a part of the hive mind. Picard is faced with the ethnical dilemma of loading a virus onto Hugh and letting him go back to destroy the Borg once and for all, or letting Hugh live. Picard chooses the latter, which ends up reaffirming his own humanity and empathy in the face of his most-hated villain.

With all of that in mind, the fact that Hugh is returning — and looking more human than ever — will likely play a major role in Picard, as will the inclusion of Seven, another former prisoner of the Borg.

Another piece to the puzzle is that we know the series will feature newcomer Dahj (Isa Briones from American Crime Story), who Picard seems to be protecting. Considering the show's connection to Seven and Hugh, it's likely that Dahj has something to do with the Borg — perhaps she's a new potential weapon for them? Regardless, it's clear from the Picard trailers that Picard sets out on a rogue mission to keep Dahj safe, which means he'll also need a whole new misfit crew standing beside him, including....

Cabrera is a Venezuelan actor who is most recognized for his role as Lancelot in the BBC series Merlin, Aramis in The Musketeers, Joseph Bachman in Big Little Lies, and Isaac Mendez in Heroes.

In Picard, he will play Chris Rios, the pilot on board Picard’s ship. He's a skilled thief and a former Starfleet officer.

Hurd is probably best known for her part as Monique Jeffries in Law & Order: Special Victims Unit, but she can also be spotted in Daredevil, Lethal Weapon, and Hawaii Five-O.

Hurd's Picard character Raffi is in a relationship with Chris Rios, and the two live together aboard the spaceship. Raffi is a former Starfleet intelligence officer with a bit of a dark side — she struggles with substance misuse.

Treadaway is most known for his role in Penny Dreadful, in which he played Dr. Victor Frankenstein for two years. He also appeared in the final episode of The Crown Season 3 as Roddy Llewellyn.

In Picard, Treadaway plays Narek, a Romulan agent trying to find out what is happening to the Borg drones.

Evagora is pretty much a total newcomer, as his last role is simply listed as an extra on the TV series Secret City.

Evagora plays Elnor, a Romulan refugee who is an expert in hand-to-hand combat and fiercely loyal to Picard. He also calls to mind Legolas from Lord of the Rings.

Pill was rocker Kim Pine in Scott Pilgrim vs. the World, as well as Ivy Mayfair-Richards in American Horror Story.

As Pill told Entertainment Weekly about her Picard role, "I play a researcher and I know some of the people around here. We have various relationships and get into some antics."