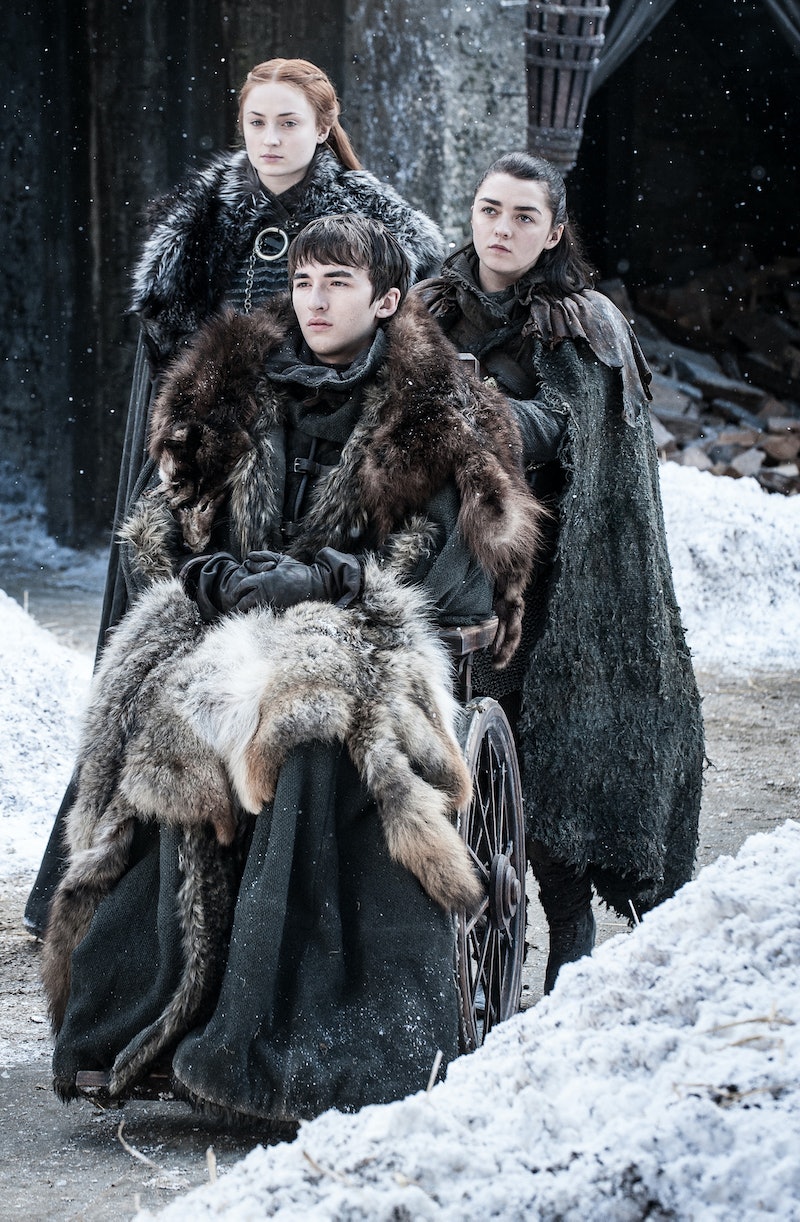 Winter may be coming, but The Winds of Winter is still a ways off. And honestly, George, as long as my Ser-Pounce-is-secretly-Azor-Ahai theory pays off, you can take as much time as you need. While you wait, you are getting a brand new book chronicling the bloody and incestuous history of House Targaryen, which is all well and good... but what about all those other houses knocking around Westeros? I mean yes, I get that the Targaryens have their flashy Legolas hair and their big lizard friends, and that's fun. But is anyone ever going to talk about why the heck all those baby Starks can mind-meld with their dogs? Or why some of them can turn into time-traveling trees? Or whether they have some long-ago connection to the seasons being so out of whack?

Look, GRRM has given us a lot of characters to root for, but if you have to pick one main family in A Song of Ice and Fire, it's got to be the Starks. Catelyn, Jon, Bran, Arya, and Sansa are all point of view characters. Ned was the protagonist until he got offed at the end of book one. Robb was the King in the North. Rickon is... still alive, I think? Maybe? Of all the families in Westeros, they're the one you want to see reunited (because, you know, they actually like each other for the most part).

So where did Martin find his inspiration for this family of icy northmen?

To begin with, the plot of A Song and Ice and Fire is heavily based on the historical War of the Roses in England. Ned Stark is a lot like Richard of York, who traveled down south to London to be made "Protector of the Realm" (the real life version of "Hand of the King"), much to the displeasure of the hot, scheming Queen Margaret. Rumors abounded that the Queen was having an affair, and that her bratty son was not the king's true heir. Meanwhile, the king himself was kind of a pushover, not nearly the great warrior that his father had been, so the queen was effectively ruling in his place. Richard "Lawful Good" York wasn't into that (and also his family had its own not-so-secret claim on the throne).

Tensions escalated between Richard/Ned and Margaret/Cersei, until the realm broke out in war. Richard's faction was represented by the white rose, and Margaret and her Lancaster allies by the red (yes, Martin even kept the original color combo). But Richard wound up with his head on a pike pretty quickly, and his kids had to take up the cause after him, with his eldest son declaring himself king and breaking off his arranged marriage for love, which royally screwed everyone over.

So... you can see the resemblance there.

There are other parallels between the Starks and the Yorks — one of the youngest York sons was murdered pretty brutally, and lil' Richard III was demonized for being disabled, although as far as I know, no one ever pushed him out a window for witnessing twin-cest.

However, the War of the Roses didn't exactly involve direwolves. Or magical trees. Or giant walls of ice. So where did GRRM get all of that?

Well, much like real world England, Martin's Seven Kingdoms were settled in three major waves: most recently there was the Targaryen Conquest, which is a lot like the Norman Conquest from France, but with dragons. Before that there was a huge wave of Andal invaders from Essos, who are very similar to the Anglo-Saxon invaders from Europe who swarmed over to Britain around the 400s. And before them there were the First Men, the culture that the Starks claim to be descended from.

In actual history, pre-Anglo-Saxon England was a bunch of Celtic Tribes who'd been there since the Iron Age. They mostly built henges and did their own thing. In GRRM's history, ancient Westeros was populated by giants and the mysterious Children of the Forest, hobbit-y little elf-like people who seem to have a mystical connection to nature.

Celtic Britain was eventually invaded by the Romans, which would make the Celts the Children of the Forest (sorry, Celts), and the First Men the Roman Empire. This kind of tracks, since an ancient Brandon Stark was the one to build the Wall up north, and the Romans did in fact build a wall to separate Roman Britain from the wilds of Scotland (their wall was not magical or made of ice, though, and the early people of Scotland were, generally speaking, not evil ice zombies).

But the First Men also seem to have some ancient Celtic characteristics themselves, with their own language and nature-based religion. They never held down an empire the way that the Romans did. And the Starks and the Grejoys in particular have borrowed a heck of a lot from another, later wave of "settlers" in the British Isles: the vikings.

The Greyjoys in the Iron Islands like to sail about and go raiding, which was the viking's favorite past-time. But the Starks seem to be especially tied to Norse mythology. I mean, the chief god of the vikings was Odin, a one-eyed, all-seeing, war-like god who was able to see through the eyes of his faithful pet ravens and wolves, and who once hanged himself from the magical tree of life in order to gain omnipotence.

Lil' Bran is most definitely en route to becoming the next all-seeing god stuck in a tree, with wolves and ravens (and crows) for friends. But all of the Stark kids seem to have these powers to some extant: they can slip into the minds of their pet direwolves, making them "wargs" in the World of Fire and Ice. In Norse Mythology, a "warg" is a wolf, usually the giant, monstrous wolf Fenrir, who is destined to one day swallow the god Odin and bring about an apocalyptic Long Night (let's hope the Stark pups are better trained than that).

Regardless of whether their pets are going to bring about the apocalypse, though, it seems clear that the Stark kids are some frightening combination of the historical children of Richard of York and the mythological deities of Asgard, with their ability to (sort of) shift their shape and their penchant for corvids, wolves, omnipotent trees, and colder climes. Does this mean that they will win the realm for a time, like Richard's kids? Or destroy themselves with in-fighting? Will they use their powers to defend against the coming cold? Or will they become monstrous wolves, eat the nice tree man, and usher in an age of total destruction?

Guess you'll have to wait until winter to find out.