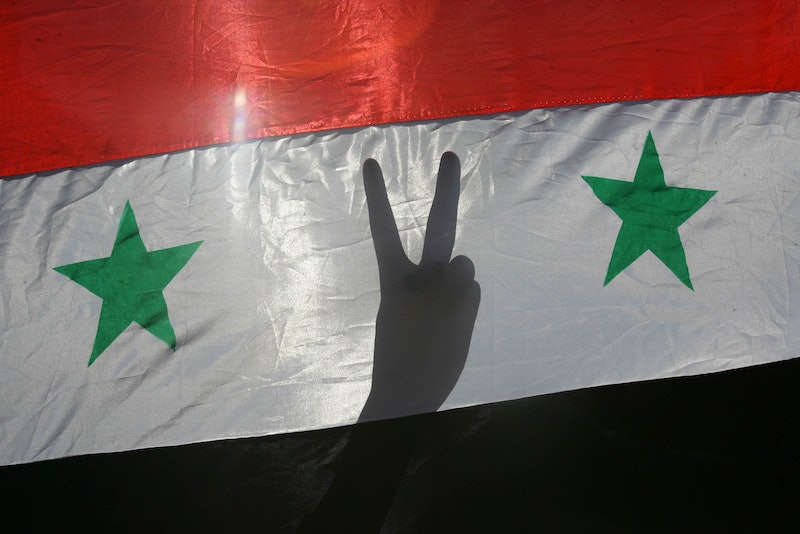 On Tuesday, a chemical attack in northern Syria killed dozens of people in the country, reigniting concern over the ongoing conflict within the region. The attack released harmful toxins into the air that caused men, women, and children to suffer. Just a day later, the complete toll may not have even been clear, but one Syrian father's heartbreaking story of the chemical attack demonstrated how deeply personal the ongoing violence can be.

According to The Associated Press, Abdel Hameed Alyousef lost several family members in the attack, including his wife and 9-month-old twins. When they began to display signs of sickness from the toxins, Alyousef reportedly took his wife and children to paramedics, before going to look for the rest of his relatives.

Ultimately, Alyousef lost his wife, twins, two brothers, two nephews, and a niece to Tuesday's chemical attack. That count doesn't include his friends and neighbors who also perished. "I couldn't save anyone, they're all dead now," he reportedly said.

The death toll from Tuesday's attack reportedly topped 70 people, many of them civilians. Hundreds of others were injured. The tragic chemical attack that took so many of Alyousef's family members has been considered the deadliest such attack in recent history, with Alyousef's experience demonstrating the true impact such violence is having on the Syrian people.

Alyousef suffered an unimaginable loss in Tuesday's attack, but there are many other unimaginably devastating stories like his own. As CNN reported on Wednesday, 31-year-old Ahmed Abdel Rahim didn't know where his family was following the attack. "I don't know if my family is dead or alive," he reportedly said. "I don't know anything."

Far from Alyousef and Rahim, Tuesday's attack earned a stern response from President Trump. Speaking from the White House Rose Garden on Wednesday, the president called the attack "heinous" and attributed the violence to Syria's leader, Bashar al-Assad.

Yesterday's chemical attack, a chemical attack that was so horrific in Syria against innocent people, including women, small children and even beautiful little babies, their deaths were an affront to humanity.

According to CNN, Trump suggested that he may initiate new actions against Syria, but he did not reveal any specifics at the press conference. "You will see," he reportedly told the media.

There's no telling what Trump could propose, and there's no telling what it will take for the violence in Syria to calm. After Tuesday's attack, though, devastating stories like that of Alyousef make it clearer than ever that the violence must come to an end. For now, survivors of the attack will continue to search for their loved ones and to heal.