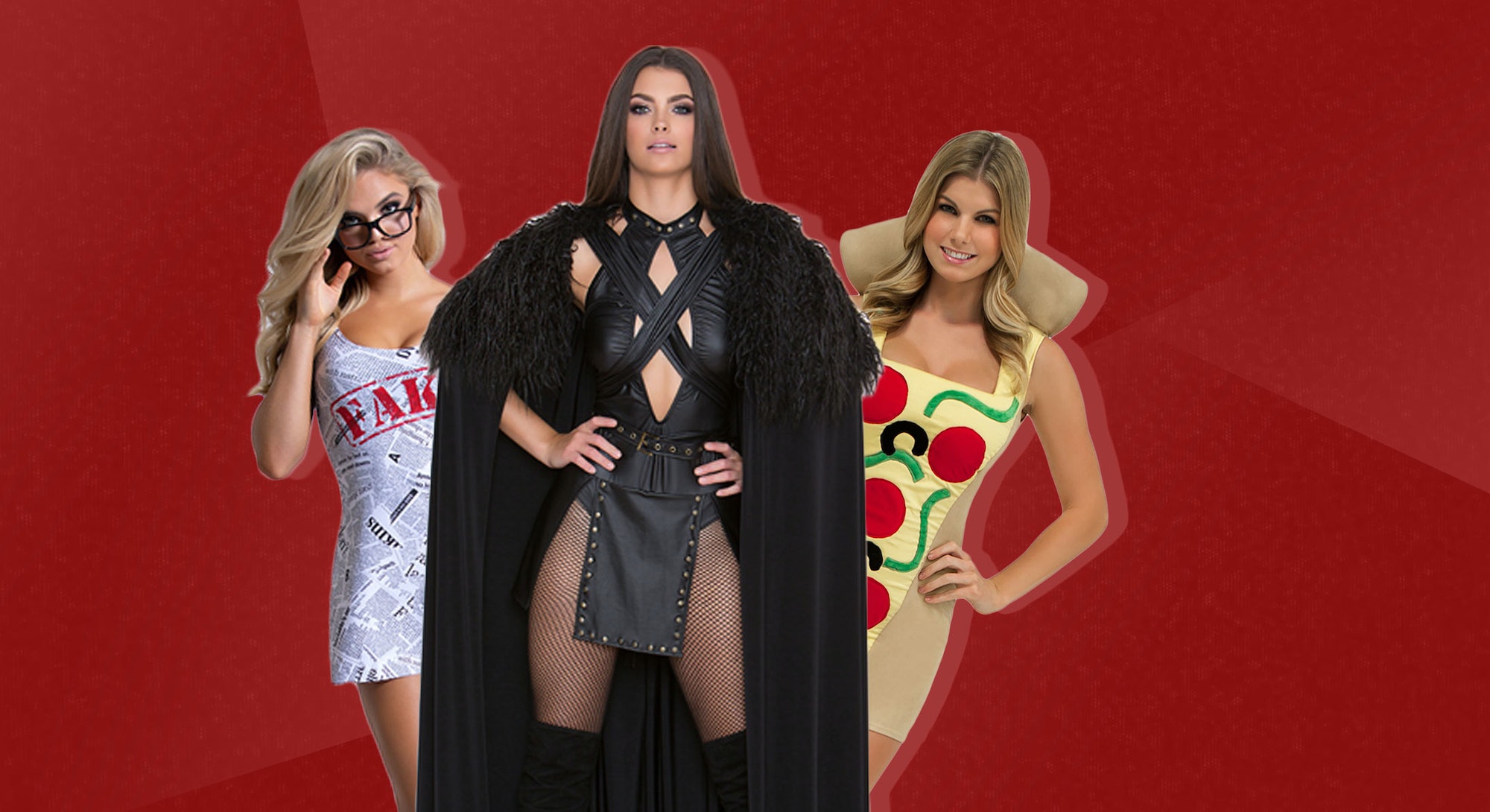 Pilar Quintana-Williams is telling me about that time she dressed as a sexy piece of pizza to go to a pizza place. It wasn't Halloween, but, yes, she had lost a bet. The wager? That if that same sexy pizza costume sold a certain amount of units, she would wear it to a pizza shop. Quintana-Williams is the Vice President of Merchandising of Yandy (offers sizes XS - 6X), an online lingerie store arguably most known to the general public for its often viral, always sexy Halloween outfits. Making a piece of pizza into a sexy costume is literally her job. And, it turns out, that's a complicated process.

"We worked really hard on getting the pattern correct and it was coming back [from production] and the crust was floppy — or should I say, like, soggy?" Quintana-Williams tells me of the infamous pizza look. "So it wasn't standing up and we had to add a layer of foam to really get the crust to stand out."

In addition to the soggy crust, there were other issues with the design. In the original pattern, the pepperonis were exactly where the customer's boobs would be, like pepperoni pasties, Quintana-Williams says. After those had been moved to more random placements on the slice, the team ran into a conundrum we can all truly relate to: choosing the perfect toppings. First, green peppers were added. Next, they threw on some black olives. Finally, the costume was complete.

Still, though, Quintana-Williams was skeptical if the costume would sell. Enter: the pizza restaurant wager. And wouldn't you know it, come Halloween, that pizza costume did sell. Sexy Pizza was a hit; it nearly sold out with only 20 units remaining when it came out in 2014, and has been brought back every year since.

"So I ate my words and I sat in the freaking pizza restaurant dressed in this pizza costume," Quintana-Williams says.

Despite the fact that Halloween is a "365-days-a-year job" for Yandy, all the planning in the world still doesn't necessarily predict what sells and what doesn't, according to Quintana-Williams, who has been with Yandy for six years.

"There are costumes that I make that I pour my heart and soul into that I'm like, 'This is going to be amazing.' And then it gets no love...then you put something [else] out there and all of a sudden...the internet will just go crazy and you're like, 'What? What just happened?'" Quintana-Williams says of the unpredictability of what she creates.

The Yandy executive tells me that this unpredictability goes for Yandy's more controversial costumes, too. Yandy has come under fire in past years for costumes that push limits. The brand has been criticized for making light of serious political issues via a sexy "Fake News" costume or, more recently, creating a sexy Handmaids Tale-inspired look — the latter of which was pulled from the site after the brand released a statement apologizing for the misstep.

Quintana-Williams tells me that she and the team at Yandy have always created costumes based on controversial events in pop culture and news, noting the outfits Miley Cyrus wore to the 2013 VMAs as a perfect example of what used to be controversial news. But as politics became more and more integrated with every step of the news cycle in more recent years, Yandy regrouped to create outfits from those moments instead. And as politics became more divisive, so, too, did some of the costumes.

While the team at Yandy knows that some costumes push the envelope, Quintana-Williams says that being offensive is never the goal. "Everything that we do is in good fun," Quintana-Williams explains. "Nothing is ever made to mock or poke any fun."

Yandy releases hundreds of costumes each year and currently has more than 2,800 available on the site for purchase. Each year there are a handful that go viral for one reason or another. Sometimes they go viral because they are, well, a little bit ridiculous (Sexy Pizza ended up on Ellen a few years ago and you've probably heard about 2017's sexy Jon Snow-inspired look) and sometimes they go viral because they make people angry. But Quintana-Williams tells me that what the brand is concerned about is that women have choices — even if some of those choices aren't remotely PC.

"The biggest thing we want to put out there is that, you know, we're supporting women and a fun night and they can rock whatever it is they want to rock that day," she explains.

Yandy is committed to the idea of creating "whatever it is" people want to wear on Halloween — and because of this, the costume brainstorming is a constant, year-round experience. Quintana-Williams tells me that there is a company-wide Google Doc that is updated daily with new ideas for costumes. Anyone from customer service to marketing to the IT team to people who work in the warehouse can add to the doc, and Quintana-Williams says this is where some of the "wackier" costume ideas come from.

It's then Quintana-Williams' job to go through the list and see what might resonate with people and gauge whether or not it's worth it for Yandy to create the look. She explains that deciding if someone can easily create the costume at their house or not is always a factor.

"There's so many [on the list], like Lizard Mark Zuckerberg — that one, somebody can make [themselves]," Quintana-Williams tells me.

"Lizard Mark Zuckerberg?" I repeat back to her on the phone, making sure I heard her correctly.

"These are the ideas on our list," she says, confirming that, yes, I did hear that correctly. The combination of a lizard mask and a hoodie is just too easy to whip up at home. "So you know, there's a lot that I laugh at, but I'm like, 'That was really good, but it's probably not going to sell.' But you know, hey, we're coming up with all kinds of creative ideas over here."

All kinds of "creative" ideas is correct and it's probably why there are sometimes costumes that go too far, despite the intentions Quintana-Williams says are behind them. Quintana-Williams does tell me, though, that if there are envelope-pushing ideas (and there always are), there is quite a bit of discussion internally to make sure "everyone is on the same page" in terms of whether or not to go forward with the costume before it gets created and sold.

Despite this internal review process, there are times when Yandy goes beyond "pushing the envelope" and instead misses the mark entirely, producing outfits that are frequently found on lists of costumes that are considered cultural appropriation. For example, the brand is still selling 44 variations of sexy Native American costumes and accessories despite backlash. When asked to comment on these types of costumes, Quintana-Williams says that "the costumes Yandy sells are never meant to mock any culture."

"We are inspired by all design aspects of the world which are reflected in a variety of our products. I personally have lived in the southwest my whole life and a great deal of my inspiration for all my designs comes from that," Quintana-Williams says. Although reviews for the Native peoples-inspired costumes are few and far between, Yandy's habit of restocking looks that sold well the previous Halloween (like the Sexy Pizza) points toward a consumer demand for these types of outfits.

When it comes to the brand's costumes that don't live in appropriative territory, Yandy's somewhat controversial nature is also at least in small part reflective of something that has always been true, and a fact that Yandy is well aware of: Sexy Halloween costumes are almost inherently divisive. Before there was the issue of whether or not a sexy Halloween costume goes too far, there was the discussion of whether or not sexy Halloween costumes of any kind were "appropriate" for women at all. The latter of which was (and still is) predominantly based in the idea of using the costumes as a way to slut-shame women. This, unfortunately, still happens today.

But Quintana-Williams tells me that Yandy wants women to be able to be sexy on Halloween if they want to. And, in spite of the occasional controversy and absurdity (or maybe even because of it), Yandy is profiting from providing this mission. The brand sells about 500,000 costumes each year, and that number is only predicted to be higher at the end of Halloween Season 2019, according to Yandy's PR team.

And this success is very largely due to women and women alone. When I ask Quintana-Williams if she thinks there's anything people misunderstand or get wrong about Yandy, she tells me that this fact — the women-led nature of the company — is often missed entirely.

"I think the funniest thing that we've seen lately is...the backlash about some of the costumes being designed by men," Quintana-Williams says. "It's actually me and my team working on a lot of these costumes, and I have an all-female team. And the majority of our office is women."

Quintana-Williams is clear when she tells me that she wants people to know that Yandy is producing costumes "for women, by women" and that the team creates styles genuinely hoping that everybody likes them.

"We're working really hard at supporting women to have a fantastic Halloween each year," Quintana-Williams says, telling me that she thinks that the difficulty and intricacies of her and her team's jobs are often overlooked entirely, even after she tells people what she does.

"I still think so many people might think that I'm over here running customer service and answering emails," Quintana-Williams says of what it's like to tell people about her job. In reality, she says, creating and managing Yandy's Halloween offerings is a year-round, multi-faceted job.

For most people, sexy Halloween costumes are, quite literally, a blip on their timeline. They're an eye-catching headline, a last-minute purchase, or the moment where you find yourself asking, "Wait... is that... a sexy Sriracha costume?" (It is). But Quintana-Williams doesn't have the luxury of ever not thinking about sexy Halloween costumes.

"People aren't going to see how much work goes into one costume that is a year-long business for us; they just see it as a minute and get something because they're being dragged to a party," Quintana-Williams tells me. "We're thinking about this all year long."