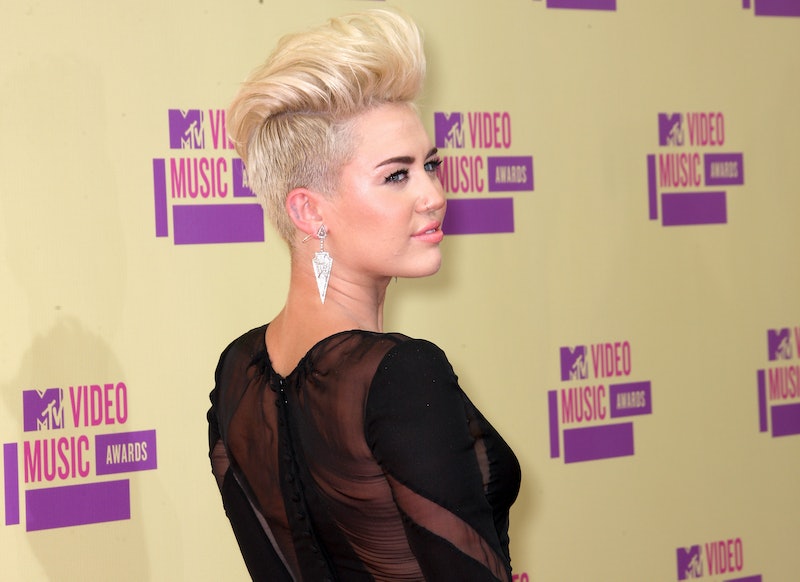 Since her media debut as Disney Channel's beloved Hannah Montana, Miley Cyrus' red carpet style has changed a lot — something that becomes especially evident when looking at Miley Cyrus' VMA outfits from 2008 until today. Once playing it safe with classic silhouettes and muted outfits, Cyrus has definitely taken a walk on the wild side since her Tween Dream years. Now opting for sexier and edgier silhouettes as well as shorter hair and baby buns, she has arguably found her sartorial voice.

The first time Cyrus attended the VMAs, her style was pretty subtle and a bit uninteresting. However, 2012 might've marked the beginning of a makeover, when she showed up to the VMAs with a newly short blonde 'do. Nothing has been the same since. As soon as Cyrus separated herself from Disney and publicly came out as queer, her style began moving into slightly riskier territory.

Though I can't say I know Cyrus personally, I do believe that in gaining agency and control over your own career and voice, your style can have an opportunity to evolve as well. After all, style is (or should be) more about who you are and how you feel about yourself, rather than the actual garments you choose to wear (although the former does affect the latter). It's always seemed to me that as soon as Cyrus began opening up about her queerness and wearing whatever the hell she's wanted to wear, her uninhibited personality and style have been allowed to shine through.

So let's take a walk down memory lane and see all of Cyrus' VMA red carpet looks from over the years. Personally, I feel that every year her style gets better and better. But why not see for yourself?

For her first ever appearance at the VMAs, Cyrus wore a Zac Posen-studded short sleeve minidress, which was sparkling and perfectly fitted. She was nominated for Best New Artist, but didn't take home the prize. According to MTV, Cyrus and Katy Perry attended together (although the date seemed pretty strictly platonic), and her mother was in attendance as well. Perhaps this year we'll see her girlfriend Stella Maxwell as her date.

After a two year hiatus from the VMAs, Cyrus returned as a presenter — older and a bit more self-assured. She wore a Roberto Cavalli dress that featured a mishmash of prints. Her wavy locks are pinned back this time, which I think foreshadows the better hair (and outfits) to come.

And just like that, Cyrus went from long brown locks to short and sleek platinum blonde ones. She looks amazing. Returning as a presenter, Cyrus rocked a super sexy Pucci floor length gown with a sheer, cutout back and sleeves. #yassqueen.

The best Miley Cyrus is, in my opinion, the "We Can't Stop" era Miley Cyrus and beyond. "We Can't Stop" was nominated for an award in four categories at the 2013 VMAs, but again, Cyrus went home empty handed. However, that did not stop her from making a splash during her controversial performance with Robin Thicke.

Cyrus sported a vintage jewel-encrusted Dolce and Gabbana outfit for the event, made up of a high waisted pants and a long sleeve crop top ensemble. Finishing the ensemble off with a pair of baby buns, a red lip, and her tongue out, this red carpet look is truly iconic and very Miley as we now know her.

At her 2014 VMA appearance, Cyrus rocked leather high waisted pants with a matching bandeau top by the designer Alexandre Vauthier. She finally left the show victorious, winning Video Of The Year for her hit single "Wrecking Ball." To raise awareness for queer homeless youth, in line with the mission of her Happy Hippie Foundation, a man named Jesse accepted the award on behalf of Cyrus.

There's no telling what outfit Miley Cyrus is going to break out to host this year's awards, but if this timeline is anything to go by, I'm pretty sure it's going to be the raddest one yet.