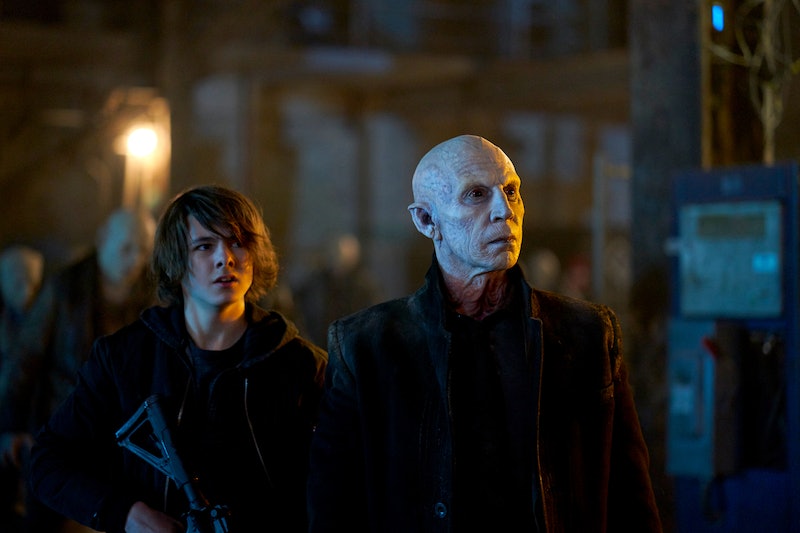 When the current season reaches its conclusion on Sunday, Sept. 17, FX's vampire series will be ending for good. The Strain won't return for Season 5, but fans should count themselves lucky that they're getting a satisfying conclusion to the creepy-crawly-horror-action series at all. Guillermo Del Toro's anti-Twilight saga had a long and winding path to the small screen, and a plan that required much rejiggering along the way… so the fact that the show even exists — and is coming to an explosive and (hopefully) satisfying finale — is something of a minor miracle in and of itself.

As undeniably brilliant as he is, and for as many beloved films as he's created, Del Toro is somewhat infamous for expressing interest in more projects than he has the ability to follow through on. (In fact, there's an entire Wikipedia page dedicated to "Guillermo Del Toro's Unrealized Projects," which counts over two dozen abandoned ideas, from a third Blade movie to a third Hellboy movie and beyond.) So the fact that Del Toro was dedicated enough to The Strain to shepherd it successfully to the screen and to the finish line is impressive enough in and of itself — and of course, plenty of credit goes to showrunner Carlton Cuse (Lost) as well.

Funnily enough, the show — which is an adaptation of a trilogy of novels — was originally conceived of as a television series; but when Del Toro couldn't find a network interested in making it in accordance with his vision, he decided to merely put the story down on paper instead, collaborating with novelist Chuck Hogan. Of course, as soon as the first book was published, networks were competing for the chance to adapt it, with The Strain finally landing at FX with a clear-cut and close-ended plan, as reported by Deadline at the time: Season 1 would cover the first book, The Strain; Season 2 would cover the second book, The Fall; and the third book, The Night Eternal, would be split across Seasons 3 and 4.

Somewhere along the line, that plan changed. When FX renewed the series for Season 3, Cuse announced that he and Del Toro actually had a five-season plan for the show, not four, according to The Hollywood Reporter. Significant deviations from the source material, and the inclusion of subplots that didn't make it into Del Toro's novels, meant that their adaptation of The Fall had spilled over past Season 2; that book's climactic event, the triggering of a nuclear winter that covered the world in darkness, didn't end up happening until the Season 3 finale.

And yet, just one year later, that new five-season plan appeared to have changed again. When FX renewed The Strain for Season 4, it was also announced that the upcoming batch of episodes would be the show's last, without the previously talked-about Season 5. It's unclear whether that decision was made because of ratings — viewership had declined from the two million range in Season 1 to below one million in Season 3 — or by the writers themselves — Cuse claimed to The Hollywood Reporter that, after finishing Season 3, he and Del Toro "looked at our remaining story and felt the best version could be told in one more season."

So instead of the sprawling, two-season adaptation of The Night Eternal that fans had originally anticipated, the final book was condensed into one 10-episode season — shorter even than the 13 episodes that Season 1 took to adapt the first novel. But regardless of whether the decision to end the show was made for commercial or creative reasons, at least The Strain is being allowed to have a conclusion… and at least it exists at all. To be honest, neither of those things were ever a given, and fans should count themselves lucky that they've had such a bizarre, gross, and thrilling Del Toro series on their TV screens for the past four years.

More like this
Ava DuVernay Thought The 'Queen Sugar' Series Finale Felt “Really Satisfying”
By Brad Witter
These 'Law & Order: SVU' Throwback Pics Show 23 Years Of Shipping History
By Grace Wehniainen
Netflix’s ‘First Love’ Is Like ‘Normal People’ Meets ‘50 First Dates’
By Grace Wehniainen
Twitter Can't Get Over *That* Janine & Gregory Shipping Moment On 'Abbott Elementary'
By Grace Wehniainen
Get Even More From Bustle — Sign Up For The Newsletter