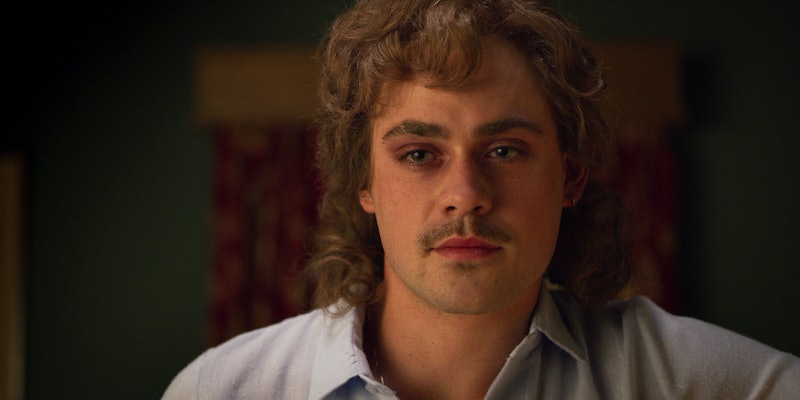 Spoilers ahead for Stranger Things 3. Stranger Things 3 introduces a lot of new villains: secretive Russians, a Mind Flayer-possessed Billy, his Flayed army, and a deadly creature brought to life by their liquified human remains. The real monster, though, has nothing to do with the Upside Down, interdimensional beings, or even high school bullies. Instead, it's something much closer to real life: toxic masculinity and the deep, damaging ways it's embedded into our culture, even on a show as far removed from reality as Stranger Things.

By now, it feels like a running gag that the women on the show are always aware danger is brewing, but the men ignore them. Joyce (Winona Ryder) knows early on in Season 1 that something's not right about Will's disappearance, and so does Nancy (Natalia Dyer) when Barb goes MIA. The two women express their suspicions to the police, but are met with skepticism at every turn — including from the men they're closest to, like Hopper (David Harbour) and Jonathan (Charlie Heaton). (At one point, Nancy's love life even comes into question, with the police claiming Barb was just jealous about Nancy's relationship with Steve.)

After a lot of valuable time wasted, the women end up, of course, being correct: neither Will nor Barb ran away. They were targeted by the Demogorgon and dragged to the Upside Down, where they were either trapped or killed.

You would think that because Joyce and Nancy have been right about these sort of things before, the men in their lives would be more inclined to listen to them when they start sounding the alarm in Stranger Things 3. And yet Joyce and Nancy still face an uphill battle before they can take on the Mind Flayer: simply getting the men in their life to believe them. Again.

Joyce, whose entire character can be defined as "distraught mother," is the first to realize something is fishy in Hawkins, and Nancy similarly notices something disturbing about the rats. But when they bring their concerns up, they're both disregarded and treated as illogical, emotional women: Joyce because she's still traumatized by Bob's death, and Nancy because everyone dismisses her as an overeager, inexperienced reporter simply chasing a dead lead.

Hopper is more focused on the fact that Joyce stood him up than on her troubling findings about the demagnetization, and Nancy gets laughed out of the office by her bosses because they can't fathom anything useful coming out of the mouth of their young, pretty intern. Worse, when Nancy tries to talk to Jonathan about it, he discredits her as well, reminding her to just keep her head down as a new hire. (Jonathan never quite understands that the criticism Nancy faces is very different and more insidious than the fact that they're both low on the corporate totem pole.)

Then there's the issue of how Billy (Dacre Montgomery) came to be the main antagonist. Introduced in Season 2 as the mullet-sporting, vindictive older brother of Max (Sadie Sink), we learn early on that Billy is abused by his father, both physically and verbally. Eleven's dive into Billy's mind in Stranger Things 3 provides fuller context: Billy used to be a sweet boy who loved his mother, but after she got sick of the abuse and left her husband, Billy became his sole target. In turn, Billy became abusive himself.

When Billy finally "wakes up" and sacrifices himself to protect Eleven — and ostensibly, Max — it's hard not to read that as an indictment of his upbringing. Had his father not been so toxically masculine and violent, it's possible Billy would have never grown up to be the kind of man who bullies children and tries to lure married women into hotel rooms. He perhaps would have never found himself on the road late at night, and the Mind Flayer would have had to find another host (or maybe none at all).

What all this amounts to is precious wasted time. Every day that the men ignored Joyce and Nancy marked another 24 hours that the Mind Flayer had to possess innocent victims and amass an increasingly large army. Surely Eleven would've appreciated fighting a monster that had even five less liquified people. (A segment in the final episode says there were over 30 dead.) Had literally anybody taken the women more seriously — whether the journalists, the police, or, hell, their own friends and boyfriends — perhaps the final battle could've been avoided entirely. And had Billy's father never been violent against women to begin with, the Mind Flayer may have never gained sentience through Billy.

Stranger Things 3's plot, essentially, comes on the backs of women and the ways in which they are mistreated and disbelieved. While this feels pretty true to life, it can also make for a frustrating watch, as this is now the third time the Duffer brothers have used some form of gender bias or sexism to propel the plot forward. (Joyce was the hysterical mother in Season 1, and Eleven and Max were initially pitted against each other in Season 2.)

That the Duffer brothers actually intended to examine how women are treated in Season 3 is somewhat doubtful, but there are nonetheless a few positives to take away from it. While the men spend most of Season 3 waffling about whether to listen to the women, it's also the men who end up suffering as a result. Nancy gets to quite literally sock her sexist bosses in the face in the hospital showdown, and it's Joyce who makes it out alive of the Russian labs while Hopper's fate remains currently unknown. Is this a parting message that everyone would be much better off if they just followed the women's leads? Perhaps. (But then really, the show would be over in three episodes.)

Even more significantly, this may be building to more women-centric plots in the future, as we saw glimpses of with Eleven and Max's friendship. "I feel like all the women are starting to take action," Cara Buono, who plays Mrs. Wheeler, told Glamour. "They have to be persuasive...I think that's a really great theme of this season. I think it will bode well for future seasons and to see where that leads."

Here's to hoping that in those future seasons, the women of Stranger Things will spend less time pleading with men to listen to them, and more time simply kicking butt.

More like this
Netflix Shut Down 'Bridgerton' S3 Rumours About A “Very Dark” Storyline
By Bustle
'The Queen’s Gambit' Season 2 Tweet Wasn’t From Anya Taylor-Joy
By Mary Kate McGrath, Jack Irvin and Grace Wehniainen
Ashton Kutcher Wants Danny Masterson “To Be Found Innocent” In Rape Retrial
By Jake Viswanath
Everything To Know About A Potential 'Lockwood & Co.' Season 2
By Gretchen Smail
Get Even More From Bustle — Sign Up For The Newsletter
From hair trends to relationship advice, our daily newsletter has everything you need to sound like a person who’s on TikTok, even if you aren’t.