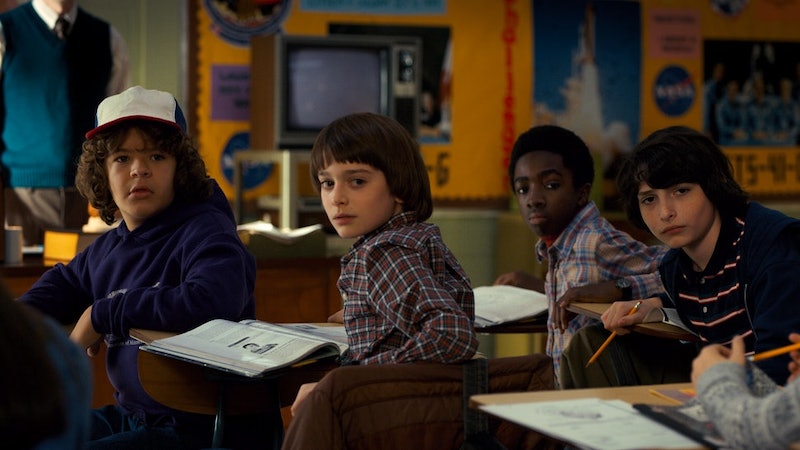 2019 has already started with a bang, thanks to Stranger Things. The hit Netflix series released a new teaser and revealed the release date for the next season (July 4!) on New Year's Eve. Additionally, a new Season 3 Stranger Things poster offers more insight into what viewers can expect come Independence Day.

The Stranger Things Twitter account created their own version of the NYE ball drop, with the countdown leading to a major surprise for all of the show's fans. The account released a teaser, with its own play on the Times Square New Year's celebration, and detailed the next season's release date. In the poster that was released alongside all of that info, all of the kids can be seen during their Fourth of July celebration. Lucas (Caleb McLaughlin), Max (Sadie Sink), and Dustin (Gaten Matarazzo) are gazing at the amazing fireworks while Mike (Finn Wolfhard) is holding hands with Eleven (Millie Bobby Brown), whom he shared a kiss with at the end of Season 2.

Interestingly enough, Eleven and Will (Noah Schnapp) are the only characters looking away from the fireworks display and towards the viewer. Considering that both of them have their own connections to the Upside Down (with Will being trapped there in Season 1 and Eleven opening and closing the gate at various points in the series), could it be that those connections have given them the ability to see some new Upside Down threat in Season 3?

Not only were fans simply stoked that they finally have a release date for Season 3, they were also excited to see some hints as to what the season may be about. And many of those fans also believe that something is up with Eleven and Will, based on this new poster.

One fan pointed out that Will and Eleven are looking right at the camera in the poster. But, what could it mean?

Another fan seems to be on board with the theory that Will and Eleven still have an interesting connection to the Upside Down in Season 3. Based on the poster, they believe that both of the characters know that the "upside down is still an ongoing problem" since they're not distracted by the fireworks like everyone else.

This fan goes so far as to say that not only do Will and Eleven know that the Upside Down is still an issue, that they're the only ones who could possibly see that issue, at all.

Since Will does look frightened in the poster, some fans are getting worried about his wellbeing in Season 3. After all that he's been through in Seasons 1 and 2, it would be devastating if he were to go back to such a dark place.

Pay Attention To The Colors

Another theory relates you have to pay attention to the colors in the poster. In the teaser, some eerie coding reads "when blue and yellow meet in the west." No one knows what that means exactly, of course. But, this fan pointed out that Eleven is wearing blue and Mike is wearing yellow in the poster, with their hands meeting. So, it definitely could be that the characters will again have a big part to play in Season 3.

It will definitely be interesting to see how this new season plays out and whether any of these fan theories are correct when it finally premieres this summer. The Fourth of July truly can't come soon enough.