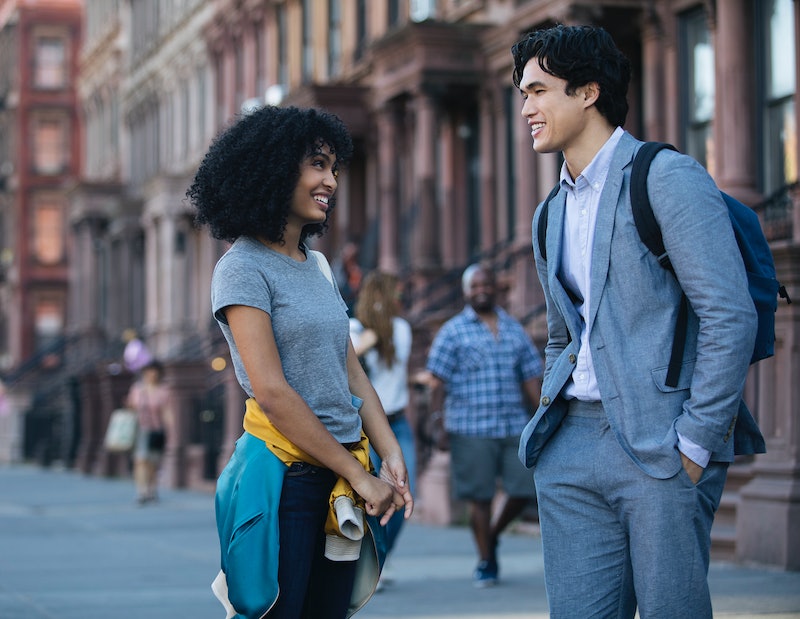 At the beginning of the film adaptation of Nicola Yoon's young adult novel The Sun is Also a Star, Natasha, played by Yara Shahidi, says, "I thought it would take me a lifetime to understand the human heart. All it took was a single day." It's that idea — that fate and love can change your world faster than you ever imagined — that drives Yoon's story about a young Black girl on the verge of deportation who unexpectedly meets, and falls for, the son of Korean immigrants who is struggling to figure out his purpose.

"I do think that there are all these little moments that change your life, and what I would love is if people paid attention more," Yoon tells Bustle. "I think fate is just being open to the world, really paying attention to all the connections that you have with other people, and being aware of the histories of other people. If we could just hold a space open, and treat each other with a little more grace, and just know that there are all these moments that led you to this particular place, then I think that we could really make the world better."

The Sun is Also a Star film is set during one day in the lives of Natasha and Daniel, played by Charles Melton. Natasha and her family are set to be deported to Jamaica, following an ICE raid on the restaurant where Natasha's father worked. But she is determined to remain in New York, and sets off into the city in search of a bureaucrat who will help her. That same morning, Daniel is preparing for an interview with an alumnus of his prospective college. When the two collide (literally) on a street in Chinatown, Daniel thinks it's destiny, but Natasha doesn't believe destiny even exists. In the day that follows, Daniel tries to convince her otherwise.

"Love is literally the thing that makes the world go ‘round. It's easy to be a cynic."

"Society tends to belittle love and love stories a lot, and it’s wild to me because it’s all everyone ever wants. In any, and all its forms," Yoon says. "We all really want someone to see us, and to love us, and [we] also want to love someone else, to feel something outside of ourselves for someone. Love is literally the thing that makes the world go ‘round. It's easy to be a cynic. But it’s crazy to me that people want to pretend that [love] is not important, when it’s what we’re made of."

The Sun is Also a Star is Yoon's second novel to be adapted to film (her debut, Everything, Everything, got the on-screen treatment in 2017) but she took some of her own advice about fate for her second go-around.

"I remember when I first got the script for Everything, Everything, I was in such a panic, I read through it immediately and I was like ‘Oh my gosh, it’s so different!' But I just remind myself that I’m a person who writes books, and that the people who make movies are brilliant, and that I should let the people who make the movies make the movies. I was much more relaxed this time, and able to enjoy it more."

One huge source of that enjoyment for Yoon came from seeing her characters brought to life by Shahidi and Melton. The actors, she says, so perfectly embody her characters that she can no longer imagine them any other way.

"It’s funny because while I describe the characters in the book, I don’t really see them or hear them when I write," Yoon says. "But I think that Charles [Melton] and Yara [Shahidi] do such a fantastic job, that I can’t not see them as Daniel and Natasha. They’re such thoughtful actors and they’re kind of a little bit like the characters; Yara is definitely more ethical and in her head, and Charles is definitely more in his body and open, and so they just match Natasha and Daniel."

While Yoon's novel and its film counterpart are definitely romances (there are lots of indulgent close-up shots of Shahidi and Melton's make-out sessions and plenty of poetic quotes on love, for instance) it touches on some tough political topics, too. And Yoon focuses in on one of the most hot-button issues in the U.S. today: immigration and deportation.

"I’m an immigrant, so I am personally aware of all the issues of deportation and being an immigrant. But I really wanted to give a human face to the issue. Because there’s always a headline, there’s always a controversy, we talk about it like it’s politics and policy, but we’re talking about real people," Yoon says. "[These are] people who have left their country, they’ve left their loved ones, and they've come to America because it is an act of hope. [And] it’s not just politics, it’s absolutely personal, because they’re just people like everyone else. And I firmly believe immigrants make this country stronger, not weaker."

'The Sun is Also a Star' by Nicola Yoon
Amazon

Consumers have more than shown their interest in diverse romances like The Sun is Also a Star. In 2018, Jenny Han's To All the Boys I've Loved Before was streamed by over 80 million subscribers on Netflix, and became one of the platform's most rewatched original movies of the year. Also in 2018, Kevin Kwan's Crazy Rich Asians hit number one at the box office, earning $25.2 million during its opening weekend.

Despite these numbers, it is still revolutionary to see a Black woman and an Asian man falling in love on the big screen. For Yoon, a Black woman married to an Asian man, fellow author David Yoon, seeing Shahidi and Melton bring her characters to life is particularly poignant, and personal.

"People of color fall in love. All the time. So they should be on screen, and they should be in books. This is what my life looks like, what so many of my friends’ lives look like. These [relationships] exist, we just don’t see them in media very often," Yoon says. "And I really want to normalize it. I just want to say ‘Hey, look at this! Black girls are vulnerable, and they’re joyous, and they fall in love. And Asian boys are super hot, and they should be in the romantic league of things.' [Because] this is how the world is, this is just the truth."