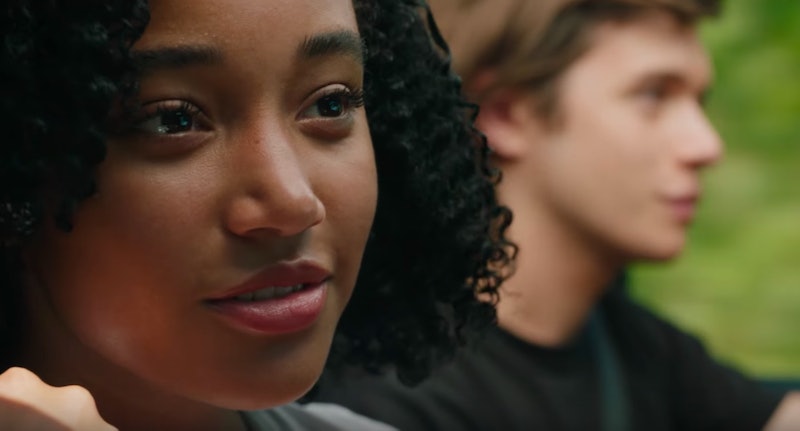 It's no secret that Hollywood sometimes needs a push in the right direction when it comes to on-screen diversity, and Everything, Everything could be just the nudge it needs. The movie, an adaptation of a YA novel by the same name, follows Maddy (Amandla Stenberg), a young woman confined to her house by illness, who falls in love with the new boy next door, Olly (Nick Robinson). Yet while the film stands out because Maddy is biracial and Olly is white, therefore creating a rare interracial romance on the big screen, Everything, Everything is not a movie about race. In fact, the film makes a powerful case for on-screen diversity without ever mentioning race at all.

And when I speak with director Stella Meghie, whose previous film Jean of the Joneses was focused on black women, it's clear that Everything, Everything's quiet progressiveness is no accident. "It was such an interesting position for us to be in, for us to be making a story that did feature an interracial couple that did not talk about it because that's rarely the case," Meghie tells me in a recent phone interview. "We were just happy to be making a very unique film altogether."

"Unique" is right. Interracial romances are few and far between when it comes to teen movies, and many films that do feature interracial romances often revolve around issues of race, like Loving, Get Out, or Save The Last Dance. This might make for thought-provoking films, but making race an "issue" in these movies doesn't necessarily help normalize interracial relationships for modern audiences. Everything, Everything, however, bucks the trend in favor of depicting a teen romance that is just that: a teen romance, not a cultural struggle.

It helps that the film has a trifecta of black female talent behind it, thanks to author Nicola Yoon, director Meghie, and star Stenberg. Due to those voices behind and in front of the camera and a thoughtful script, the film eclipses racial norms usually upheld in film, specifically with its protagonist. In the book, Maddy is half Japanese and half Black, which reflects the races of Yoon's own daughter, while in the film, Maddy is half white and half Black, in keeping with Stenberg's background. Some fans might be upset at the decision to shift Maddy's racial identity, but as Meghie explains, Yoon and the director both felt that the specific races were not as important as the spirit of diversity.

"It was important to Nicola Yoon that the character remain biracial," Meghie says. "I just want to maintain the diversity of the film." It's fair to say that in this, she succeeded. The movie is filled with women of color, including Maddy's mother Pauline (Anika Noni Rose) and her nurse Carla (Ana de la Reguera); in fact, every significant character is a person of color except for Olly. It's a pretty stunning picture for Hollywood, a place notorious for whitewashing everything from Japanese Manga (Ghost in the Shell) to Biblical Egypt (Exodus: Gods and Kings).

Meghie recognizes how lucky she was to work with a studio that supported the film's mission of diversity. "[Everyone] 100 percent wanted to maintain the diversity of [Yoon's] book," the director says. "It was important to Nicola, it was important to me, and the studio and the producers all felt the same way.... I felt a definite connection with Nicola and her story. We had a serious bond over trying to get this film to really represent her book."

For both Yoon and Meghie, that meant ensuring the diversity in the book would be reflected on the screen. In the current cinema landscape, where audiences are demanding more diversity and representation when they go to the movies, Everything, Everything is leading the way, and I can only hope other movies will follow.

More like this
At 14, Pauline Chalamet Fell In Love & Danced ‘The Nutcracker’
By Grace Wehniainen
In 'The White Lotus,' Leo Woodall Gets His Moment
By Gabrielle Bondi
Elizabeth Debicki On Her Approach To The Most Debated Scene From 'The Crown'
By Grace Wehniainen
Melissa Barrera On Anxiety, Aloe Vera, & Finding Self Love
By Brittany Leitner
Get Even More From Bustle — Sign Up For The Newsletter