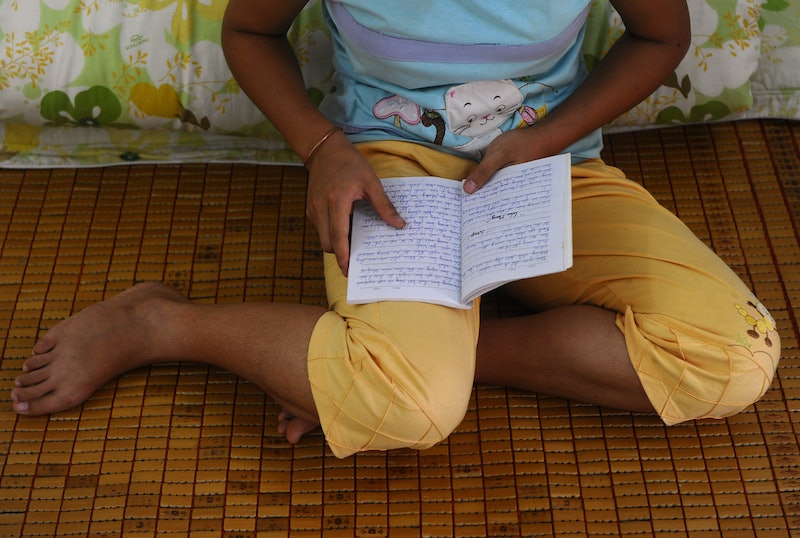 Back in the '90s, when the Internet was just a series of tubes, AOL chat rooms, and that one dancing baby gif, we had to take our life lessons where we could get them. This was doubly true if you were a tweenager perched on the precipice of puberty and ready to learn the secrets of teenage life. Luckily, back then, we had this thing called chapter books. The Babysitter's Club taught us about the joys of supportive friendships and free-market capitalism. Goosebumps helped us learn that most people are secretly ghosts. And Nancy Drew showed us just how terrifyingly easy it was to get kidnapped and held hostage in an old mill, week after week.

But only one series taught us the kind of lessons that really matter: lessons about how the wealthy and beautiful get to play by their own rules, brutalize anyone who gets in their path, and spell "Dairy Burger" any damn way they see fit.

THERE’S NO PROBLEM THAT CAN’T BE SOLVED WITH SNOOPING

Think your new boyfriend is secretly addicted to all of the drugs? Spy! Worried that a new girl at school has a terrible secret? Don't ask her — just spy! Suspicious that your sister’s supposed after-school job is actually just a sexcuse to get to second base with some cute dude in the supply closet every afternoon? Get voyeuristic with it.

Why do they get copies of the Sweet Valley High's Oracle at Steve’s college? Because it’s all downhill from high school, obvi. Being a college kid able to drink and engage in wanton sexual relations? That's nothing compared to going to the Beach Disco, you fools!

ATTRACTIVE PEOPLE CAN DO ANYTHING THEY WANT

NOTHING IS MORE SOPHISTICATED THAN FRANCE, DAHLING

It's a well-known fact that France is where all the classiest clothing comes from, as well as the classiest breads, braids, etc. It's like if Lila Fowler were a country!

YOUR TRUE LOVE HAS PROBABLY BEEN IN THE BACKGROUND THE. ENTIRE. TIME.

So don't bother meeting new people, taking up hobbies, or anything dumb like that. Someone will just turn up, most likely in the final chapter of the book that is your life.

IF YOU'RE POPULAR, DRUGS WILL KILL YOU IMMEDIATELY

But if you're kind of a scumbag that nobody likes too much, you can do drugs indefinitely with no ill effects. It's pretty strange, but that's science for ya, right?

You SHould ALWAYS HAVE A SCHEME

Talking to someone honestly about your feelings and concerns, and hoping they’ll make the right choice based on human decency? Ha ha, maybe that kind of thing works for poor people. But in Sweet Valley, everyone gets what they need by unleashing a scheme. In fact, the town's economy operates on a scheme-based barter system: trade 10 schemes for a plan, and 10 plans for a secret agenda.

YOU'RE JUST ONE EXTREME ACT AWAY FROM GETTING WHAT YOU WANT

Did I mention that the original name of the series was 'Sweet Valley I'll Make You Sorry I'LL MAKE YOU ALL SORRY'? A few of the early books darkly suggested that attempting suicide was a pretty legit way to get on the cheerleading squad, and also that running away from home would make everyone appreciate you and buy you new sweaters.

PRETENDING TO BE YOUR OWN TWIN SISTER IS totes FINE

Do any of the books offer compelling proof that the Wakefields weren't actually just some kind of Tyler Durden stress-induced personality-split thing?

When in doubt, BLAME IT ON A HEAD INJURY

I mean, not like anyone was holding you accountable for any of your actions, anyway (see No. 3). But just in case, you can always remind everyone that you had one of those head injuries that makes you act like an asshole, and then you had the other kind of head injury (the one that makes your personality go back to normal and also erases all your memory of having been an asshole), so that pretty much evens things out.

IF YOU COMMIT A CRIME, JUST GIVE IT A FEW WEEKS and EVERYONE WILL FORGET ABOUT IT

Remember how Bruce Patman tried to rape Elizabeth and no one seemed to be all that bothered about it? Or even thought to, I don't know, tell the police?

NEVER MOVE AWAY FROM YOUR HOMETOWN

Sure, there are probably other sunny places in California, towns whose residents are not subject to near-constant kidnappings, earthquakes, hostage situations, and motorcycle crashes — but do you know how much a split-level ranch house is going for in those places these days?

If You Don't Look Like This, That's Because You're Probably Ugly

And I'm not just talking about all the lame makeovers that every girl who wore glasses in this series had to endure. Even worse, in 2008, Random House put out a number of "revised" Sweet Valley High books, with "updated" language, and the twins’ "perfect" size 6 bodies swapped for "perfect" size 4 bodies. The magic continues.

Never TRUST A COLLEGE GUY WITH A MUSTACHE