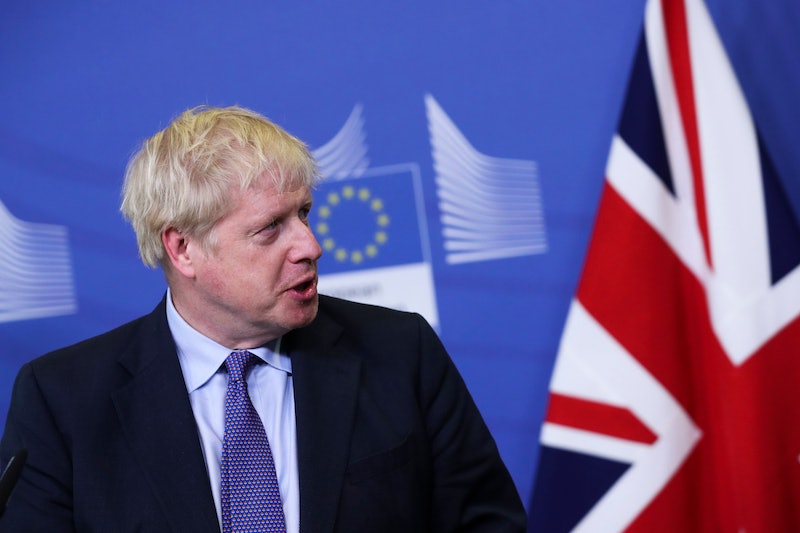 Boris Johnson has managed to agree on a new deal with the EU, but there is still some way to go before the UK receives a final Brexit conclusion. First, Johnson has to convince Parliament to vote for the deal by Oct. 31; something which he may struggle to do. Until then, the nation remains in suspense. But one eye-opening detail from the negotiations has been revealed, and it shows that the tampon tax reportedly almost blocked Johnson's Brexit deal.

Per The Times, tampon tax negotiations between the Prime Minister and the EU carried on into the early hours of Thursday morning. VAT had been revealed as the reason for the agreement delay, reports The Telegraph, but the tampon tax element was kept under wraps. Eventually, both sides came to an agreement that would allow people in Northern Ireland, as well as the rest of the UK, to buy sanitary products without added VAT.

So why is the tampon tax so important to Johnson and his deal? Well, it was one of the promises of the Vote Leave campaign; a campaign that Johnson played a big part in. The tampon tax ⁠— which sees sanitary products classed as luxury items and hit with a 5% VAT ⁠— "was totemic to the referendum campaign," a close adviser to Johnson told The i. "The PM told the whole team, 'We have to sort the tampon tax.'"

The problem was that, under proposed terms, Northern Ireland would be forced to abide by European VAT laws. One of these states that the VAT on period products can only be reduced to a minimum of 5%. So when the Conservative government's pledge to remove UK tampon tax finally comes into place, Northern Ireland wouldn't benefit, states The i.

The EU was reportedly reluctant to change its stance, according to the newspaper, but eventually backed down. Tampons and other affected sanitary products sold in the UK are now "likely to go VAT-free at the earliest possible opportunity."

It's not yet clear when the "earliest possible opportunity" will be. In January 2018, the European Commission launched reforms that would allow member states to remove the tampon tax, reports The Telegraph. (You can probably thank activist Laura Coryton and her petition for the extra attention.) However, this new law doesn't come into force until January 2022 at the earliest. Even if we officially begin the Brexit process at the end of October, the currently agreed transition period does not end until December 2020. People who have periods could still be looking at a lengthy wait.

Getting rid of the tampon tax is, of course, a commendable move. Period products are not a luxury; they are an essential. Upping the cost of tampons and sanitary pads only serves to make them unaffordable and prolongs the issue of period poverty.

If countries such as Ireland, Kenya, and Canada can eliminate the tampon tax, it's high time our government did the same. Thankfully, it looks like the financial prayers of people with periods have finally been answered.