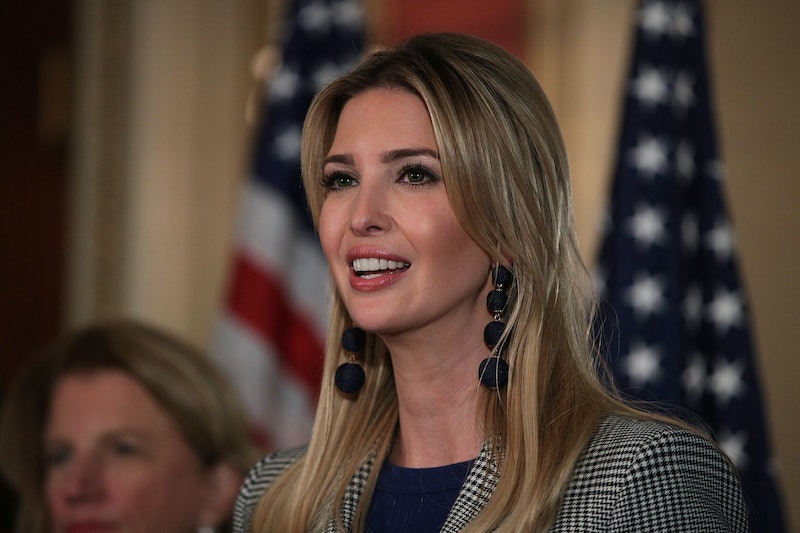 While Paul Ryan, Mitch McConnell, and President Trump were the main names behind the GOP's push for tax reform, another figure was working behind the scenes to get the legislation approved on Wednesday. The first daughter has promised to fight for working women since joining the White House as a presidential adviser, and Ivanka Trump pushed for the tax bill with the intention of helping families. She called the tax overhaul "long overdue" at a town hall in October, and celebrated the bill's approval in Congress Wednesday by calling it "historic" in a tweet.

Ivanka was committed to increasing the child tax credit, but she was already onboard with the plan before it was certain her specific wishlist would be included. "For me this tax plan really couples two things that are really core values as a country, which is work and supporting the American family," she said at the October town hall in Bucks County, Pennsylvania.

The GOP tax bill increases the previous child tax credit from $1,000 to $2,000 per child ($1,400 of which is refundable) and adds a $500 credit for adult dependents. The president credited his daughter and Sen. Marco Rubio (R-FL) with pushing for the child tax credit, saying at a White House event Wednesday, "Because of folks like Marco Rubio and Ivanka — when you think about the folks with kids in the household — this plan doubles the child tax credit." Once her child tax credit hike was included, her support was even more enthusiastic.

In her push for the tax bill and child tax credit, Ivanka met with at least a dozen members of Congress, inviting some to dinner at her Washington D.C. home, according to ABC News. She also attended a November forum on tax reform in Maine with Sen. Susan Collins (R-Maine) to tout the GOP plan more publicly. "The stated goal is twofold: enable our businesses to be competitive and thrive, and to provide meaningful tax relief to middle income families," Ivanka said. Collins also praised the presidential adviser for her work promoting tax reform, saying at the event, "Ivanka is a passionate advocate for working families and working mothers across the United States. I have truly enjoyed our discussions."

But despite Ivanka's claims that a higher child tax credit is a victory for families, it won't be drastically beneficial. The New York Times' Ernie Tedeschi wrote in October that expanding the credit "delivers only modest benefits," partly because it's not fully refundable. He explained:

"If the credit were fully refundable, or applicable against both income and payroll taxes — which virtually every working person pays regardless of income — more families would benefit."

The other important aspect of the new child tax credit to consider is that it expires in 2025. It's one of multiple tenants of the individual income tax that are temporary, while the lower corporate tax rate is permanent. Two years after these provisions expire, 53 percent of households will see their taxes rise, and families with incomes higher than $200,000 a year will benefit more than anyone else from the very beginning. The bill now goes to President Trump's desk, but he'll reportedly wait until Jan. 3 to sign it into law.