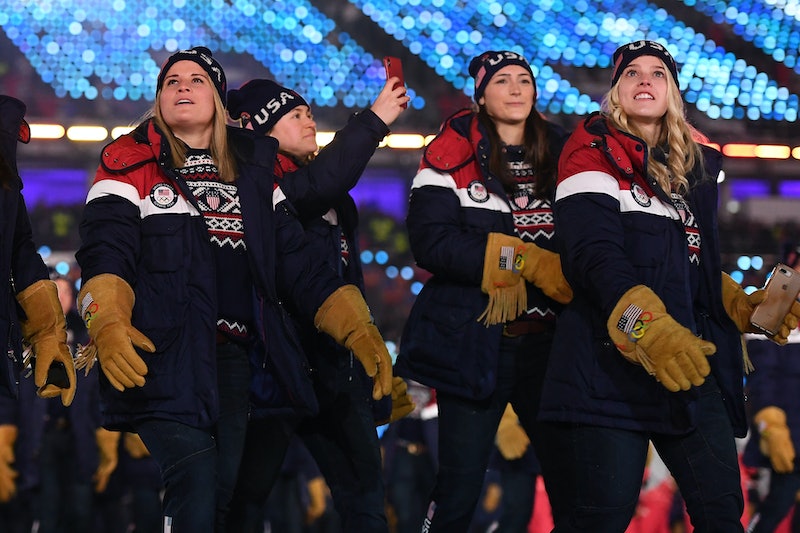 Brrr! The 2018 Winter Olympics are taking place in PyeongChang, South Korea, where it's brutally cold. It is the winter games and freezing temperatures should be expected. Designer Ralph Lauren planned ahead for the bitter chill. Team USA's 2018 Olympic opening ceremony uniforms included jackets with heaters built into them , according to Yahoo.

The future is here and it's hot — literally.

At first, the Twitterverse was busy reacting to those fringed, brown gloves that the American Olympians wore with their unis. But the Lauren-created heated parkas are a key detail that shouldn't be overlooked.

The high-tech jackets are the ultimate execution of fashion and function. They are keeping our fellow Americans and competing athletes warm and stylish.

The wearable heated tech is also decidedly low-key. You might not have been aware of it if we didn't tell you. You can't see, hear, or touch the technology. It's battery-operated and discreetly woven into the classic parka, according to CNET. It's also the first time that Team USA has worn heated jackets to the Olympic games.

The Team USA opening ceremony attire was about warmth in other ways, as well. The outfits were layered. In addition to the parkas, the ensembles consisted of wool sweaters, wool ski hats, the aforementioned gloves, brown laced boots, and slim jeans. In red, white, and blue hues, of course.

It's not just a classic parka; it's also a portable space heater. The jacket's high and low heat settings can be adjusted by the wearer with the push of a button.

CNET reports that the panel and power cords are tucked into the jacket's lining. The battery pack boasts the Polo logo and is removable and rechargeable.

If you are fascinated by the wearable tech concept, check out this further breakdown of how the jacket actually works.

The coats are also washable. You just have to use caution and follow the directions when doing so.

CNET also reports that less than 100 of the heated parkas were produced and released to stores at retail. The coats cost $2,495 and sold out in fewer than 20 minutes. The wearable tech jackets could enjoy a reprise next winter, as well. The interest generated by the Olympics has the brand thinking about its next piece of apparel in this category, according to CNET.

The Twitterverse didn't ignore the heated jackets. It just was more interested in what the heck was going on with the uniform's western-inspired work gloves.

Cute isn't the right word for the heated jackets. Sure, the coats are simple but effective. The silhouette will never go out of style. This tweet may include a bit of snark, which is understandable. But the temperatures in PyeongChang warrant the additional warmth.

This user couldn't get his hands on a heated jacket, so he made his own. Sometimes, you have to improvise.

This tweet pointed to the juxtaposition between countries, their clothing, and their cultural legacies. Naturally, Team Bermuda wore Bermuda shorts to the opening ceremony. The shorts have some, well, length, and Team Bermuda wore knee socks pulled all the way up. Still, some skin was exposed.

This user called attention to the conditions and expressed concerns for the athletes who are participating in the Olympic Games. It highlighted the fact that the technology is available and the designer took advantage of it.

The parka is as timeless as it is wearable. The internal heater is extra in the exact right way. Hopefully we can expect designer-engineered heated jackets in our future.