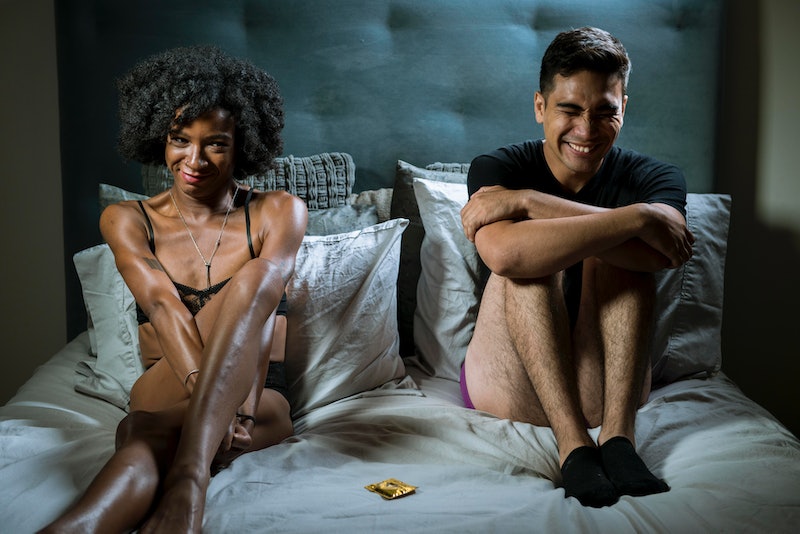 "I experimented with a few different sexual acts in my teens, but I didn't have penile sex until I was in my 20s." Does that sentence sound weird to you? That's probably because we tend to assume all sex involves a penis. That's also probably why we say "vaginal sex" when what we're really talking about is penis-in-vagina intercourse. And that's one of many reasons that I and others take issue with that word.

When I started to experiment sexually as a teenager, the idea that sex is normally for men's pleasure started popping up everywhere. After learning about my first sexual experience, which I was on the receiving end of, a friend of mine said "I assume you gave him... well, obviously." Whatever she was thinking wasn't obvious; I hadn't given him anything but my number. A few years later, I read an erotica story about a girl discovering each type of sex, and the types she learned (in order) were: hand jobs, blow jobs, and vaginal sex. The term actually made sense there, since literally nothing else she'd done involved a vagina.

These assumptions reflect a widespread view of women as passive receptacles for men's sexuality, not humans with desires of their own. Of course, "women" and "people with vaginas" are not the same, but since our society tends to conflate them, our views of each influence each other. And we tend to view both as undeserving of sexual pleasure.

Sex educator Kenna Cook points out that the term "vaginal sex" is also extremely heteronormative. Let's say, for example, that two people with vaginas are in a relationship. Isn't all the sex that they've had "vaginal sex"? Yet somehow, according to the usual definition of the term, what they're doing doesn't count. That's because our society defines "vaginal sex" — like pretty much every other sex act — in terms of a penis. "Language for sex that is coded in anatomy is meant to reinforce a heteronormative, reproductive-based idea of sex," Cook tells Bustle.

The term "vaginal sex" can also be exclusionary toward trans and gender-nonconforming people who don't identify their genitals using this term. "The terms people use for their sexual body parts are a large contributor to them feeling comfortable engaging in certain sex acts," Cook says. "Some trans men don't refer to their genitals with female-coded language, opting for 'boy hole' or 'front hole.' The same with trans women, who may use 'clit' to describe their pleasure-receiving genitals."

So What Should We Say Instead?

But beyond just changing our terminology, we need to get past the idea that "vaginal sex" is the definition of sex. "All sex acts should be considered sex," says Cook. "We have been taught and socialized to believe that the status quo for the meaning of 'sex' is heterosexual, penis-in-vagina, and for reproduction only. This is probably why I get queer youth asking me, 'So how does lesbian sex work?'"

Her response to this question? "It's like all other kinds of sex, kids!" she yells. "Sex starts with consent and ends with pleasure. What happens in between that will vary from person to person."

More like this
Are Gemini & Leo Compatible In A Relationship?
By Kristine Fellizar
Here’s How To Deal With Sexual Frustration If You Don’t Want Casual Sex
By Annakeara Stinson and Mackenzie Sylvester
Here’s How To Reignite The Spark In A Sexless Relationship
By Vanessa Marin
The Juiciest “Would You Rather” Questions For Couples
By Alice Broster and Rachel Mantock
Get Even More From Bustle — Sign Up For The Newsletter