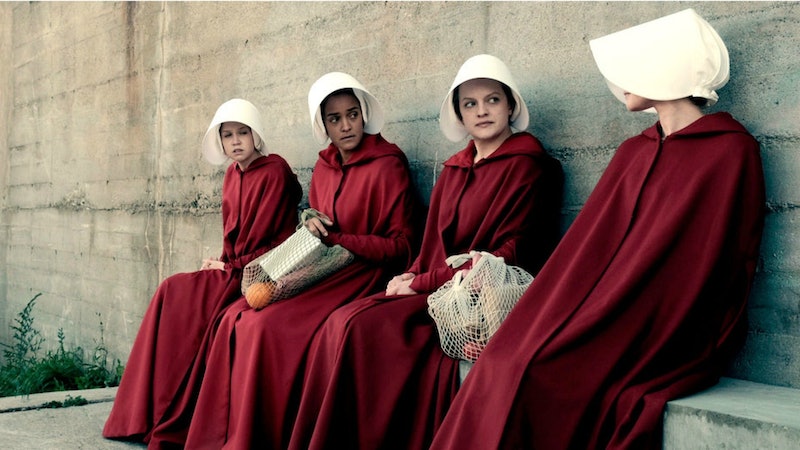 Margaret Atwood’s long-awaited The Handmaid's Tale sequel, The Testaments, is finally here, to the great satisfaction of both longtime Atwood superfans and the newly-initiated — many of whom come to Atwood’s nightmare vision of America via the award-winning Hulu drama it inspired. While Atwood’s fiction is solidly encamped in the “literature” section of the bookstore, there’s always been a tendency in her work to lean toward the thriller and mystery shelf — and early reviews (as well as my own reading) of the new novel suggest that the Canadian eminence grise of feminist dystopian fiction has officially turned up the Big Page-Turner Energy.

This ability to shift between high-literary and high-octane also shows clearly in the Hulu show for which Atwood is a consulting producer — on-screen, the story of Offred and her Handmaid army plays out as a plot-driven, speculative action-adventure. In the recently-aired season three finale, for example, a ragtag band of scrappy freedom fighters succeed in airlifting a group of endangered children out of the fundamentalist military state of Gilead using little more than a handful of rocks and an unusually large amount of donated soap.

But even more than the energetic twists of the The Handmaid's Tale's past two seasons, and certainly more than Atwood’s basic premise that women might be stripped of reproductive and economic freedoms (or that this nation’s government might be overtaken by a particularly ruthless and unimaginative brand of hostile masculinity), up until now, the thing that was most unbelievable about the world of The Handmaid’s Tale isn’t what you might think.

Until The Testaments, readers never saw women in near-future Gilead dying of preventable complications related to pregnancy and childbirth.

Today, the maternal health crisis in the United States affects 18 out of every 100,000 births in the U.S., and worldwide over 800 women die every day of pregnancy-related causes. According the Centers for Disease Control and Prevention (CDC), right here in one of the most economically and developmentally advantaged countries on Earth, women die due to pregnancy or childbirth at a rate of 700 per year —that’s almost two women per day. The U.S. has the worst rate of maternal death in the developed world, according to investigations by NPR and Pro Publica. Over 60% of those deaths are preventable. Another 50,000 women per year experience serious or life-threatening complications. The maternal mortality rate in America has more than doubled in the last two decades. It is officially a crisis.

The reasons for this crisis are many, but they include disparities in care for pregnant women of color, who are three to four times more likely to die of maternal health complications, in part due to the long-term adverse health effects of systemic racism, as well as bias in health care providers and institutions. America’s maternal mortality rate is also driven by a lack of access to affordable prenatal and postnatal care in rural and underserved communities—and especially, it should be emphasized, in states where reproductive care is underfunded, or under siege. When and where reproductive freedom is not supported, reproductive health as a whole is likely to suffer.

"But access to high quality maternal health care has been shown to be savagely, cruelly unequal, and that lack of access is killing women, right now."

In Atwood’s Gilead, reproductive freedom is a non-starter, and Handmaids, the women assigned to elite families to bear children, are routinely shot, hung, poisoned, stabbed, and tortured — although they are rarely subjected to this level of violence if they become pregnant. Still, Gilead’s maternal health care standards aren’t what anyone would call ideal. Prenatal care in fundamentalist, traditional Gilead consists largely of visits (plus threats and beatings) from an Aunt, a sort of paramilitary midwife wannabe, coupled with occasional paternalistic prods from male OBs in an anonymously clinical setting. Childbirth in Gilead is savagely cruel: Handmaids are subject to ritual birth ceremonies in the presence of Wives and Aunts implicated in their sexual enslavement — or, as in one memorable sequence at the end of the show’s second season, a character might be lucky enough to give birth alone in a freezing, remote house while trying to make a desperate escape.

Maternal health care in current-day, real-life America is obviously better than this. But access to high quality maternal health care has been shown to be savagely, cruelly unequal, and that lack of access is killing women, right now.

Studies have revealed that a full 25% of women do not receive the recommended number of prenatal care visits, and that percentage rises even higher for women of color: 32% for African-American women, 41% for American Indian and Native women, and 50% for Latina women." Access to affordable, reliable prenatal care, and paid time off from work to get prenatal care, could be a massive game-changer for maternal outcomes in the U.S.

While Gilead’s brutal home birth methods shouldn’t be compared to a home birth in the U.S., the question of who can afford to give birth safely at home is likewise one of access. Planned out-of-hospital births account for less than 1% of births in the U.S., and women who have them are more likely to be able to afford the costs out of pocket, and to be attended by a trained birth professional, such as a midwife or doula. Even the best-planned home births face twice the risk of infant death compared to hospital births (the American College of Obstetricians and Gynecologists recommends hospital births as the safest choice for most people). But first-time, unattended, and unplanned home births are all many times riskier — exactly the kind of home birth that a young mother without insurance or Medicaid coverage would be more likely to face. Medicaid currently covers over 40% of all births in the U.S., and proposed cuts to the program put millions of pregnant women at risk.

Funding cuts for maternity services are already another major force behind rising maternal deaths. Many American women who would otherwise choose to give birth in a hospital setting are forced to go to extraordinary and dangerous lengths to get the care they need. Rural hospitals and clinics around the country, from the southeast to the Midwest, are closing due to cuts in funding, meaning that in many counties women must drive hundreds of miles to access obstetric care. Even in densely-populated urban areas of the U.S., a growing number of pregnant women find themselves in maternity deserts without easy access to prenatal, obstetric, or postpartum care. More than half of rural counties in the U.S. lack hospital obstetric services.

The high rate of Cesarean-section delivery in the United States — currently, one in three births is a C-section — is also implicated in the high maternal mortality rate. While C-sections are often lifesaving for women and infants, data suggests that complications from surgical deliveries, including hemorrhage and infection, are among the major causes of maternal death in the U.S.

"...one of the more speculative aspects of Gilead’s portrayal on page and on screen up until now might have been the remarkably high survival rate of the Handmaids who succeeded in getting pregnant and giving birth, under wildly stressful conditions."

The Testaments depicts an emergency home C-section that ends in the Handmaid’s death: After significant blood loss during childbirth, a Handmaid is "cut open to get the baby out," as one of the book’s teenage narrators puts it: "It wasn’t something she chose." In another particularly shocking sequence from the most recent season of the Hulu series, a pregnant Handmaid is gunned down but kept alive in a hideous, semi-vegetative state until her fetus is considered viable — another example of just how far from the top of the priority list Gilead places a mother’s well-being or survival.

These scenes both showcase a major underlying cause of America’s maternal mortality crisis: our tendency to privilege the well-being of the infant over the well-being, or even the survival, of the mother. In some cases, that tendency is well-intentioned, as when overnight nurses wake recovering new mothers every hour to breastfeed in the hospital. In some cases, as with legislative pushes by some states to abolish a women’s right to terminate a pregnancy for her own health (or any other reason), it is motivated by what can only be seen as a flagrant disregard for women’s health.

Considering the stark facts about maternal mortality in the U.S., one of the more speculative aspects of Gilead’s portrayal on page and on screen up until now might have been the remarkably high survival rate of the Handmaids who succeeded in getting pregnant and giving birth, under wildly stressful conditions. That changes with The Testaments. As the author of some of the most-admired feminist dystopian works ever published, Atwood’s got her finger squarely pointed at the fatal flaws of a savagely unequal system that is characterized by its cruel lack of concern for the well-being of women.

To be sure, America is not Gilead. But when it comes to valuing women enough to make sure we’re kept alive, healthy, and adequately resourced for pregnancy and childbirth, America has already made its priorities pretty clear, no red cloaks or white bonnets required.

With the success of The Testaments, the risks women face in a society that devalues prenatal, obstetric, and postpartum care will be clearly shown for what they are: A dystopian system. But one we can, and must, prevent.