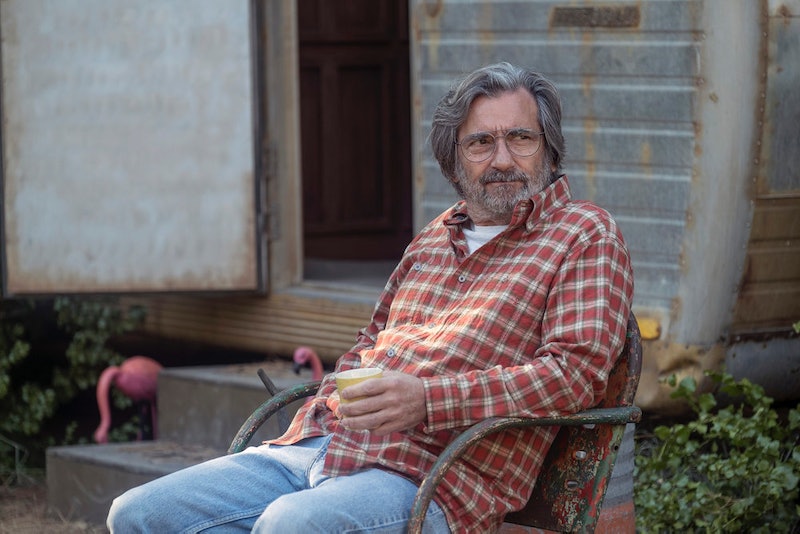 Rebecca's health has been a major subject of concern on This Is Us ever since the Season 3 finale, which included a flash-forward of the Pearson matriarch looking significantly older and clearly bedridden. And while fans will be quick to note that Miguel was nowhere to be found, a new theory has cropped up that could potentially explain why Nicky is at Rebecca's bedside on This Is Us, despite the fact that the two of them hardly know one another in the present day timeline. What could possibly explain him being there while Miguel is MIA? Like most things involving this show, the answer could be downright heartbreaking.

The theory really started to gain some traction after last Tuesday's episode "Sorry," which focused both on Nicky's court case as well as Rebecca's visit to Philly. Throughout the episode, Kevin kept seeing Jack in Nicky's place, so that whenever his uncle reprimanded him or said words of encouragement, it felt like it was coming from his dear old dad. That makes sense, given that Nicky shares a lot of the same DNA as Jack, making it easy for his family to feel like part of their patriarch is still around. But what if it's also meant to serve as a clue for why Nicky becomes such a prominent part of Rebecca's future self?

Reddit user shut_the_duck_up suggests the possibility that Rebecca does, in fact, end up having Alzheimer's, like so many fans have predicted, and that the deterioration of her memories has caused her to believe that Nicky is actually Jack. That's why Nicky is right by her side in the flash-forward. Perhaps he's even agreed to play along with everything in the hopes that it provides her with a sense of comfort in believing that the love of her life is not dead, but rather right by her side.

It's a heart-wrenching possibility to consider, which is definitely right in the show's wheelhouse. (By now the writers are pros at ripping our collective hearts into shreds.) This would also help to explain Miguel's absence. Some fans have predicted that he may already be dead in this future timeline, but what if he's actually just staying away since it's too painful to watch his wife be so clearly in love with someone else, even if that person isn't really there? That could be difficult for anyone to deal with, so it'd be understandable why he'd need some distance from the situation.

All season long, Rebecca has been acting less and less like herself. She's constantly taking notes about things or documenting everything on her phone, which she lost for a brief moment at Randall's office. When Randall later confronted her about his concerns, her hostile reaction was very out of character, making both him and fans all the more worried about what it could mean.

If she really is having trouble remembering things, this theory about Nicky could very well prove to be true and will make you start to see that flash-forward scene in a whole new light.