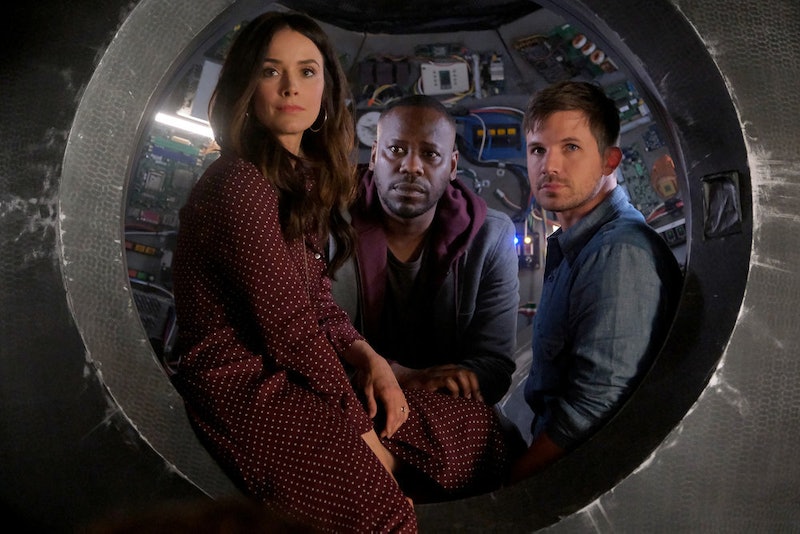 Spoilers ahead for the Timeless series finale. Like Rufus himself, Timeless has had the opportunity to come back to life. But the ending of the Timeless series finale ties up the time-traveling adventures of Lucy, Wyatt, Rufus, Jiya, and Flynn for good. In the two-hour special, "The Miracle of Christmas," Timeless not only shows how Rufus comes back to life, but gives the gang a couple more adventures. While fans will inevitably still be disappointed that Timeless is truly over, the series finale gives viewers nearly all the closure they could want — and even a hint of more time traveling in the future.

The Timeless Season 2 finale ended on the cliffhanger of Rufus being killed in 1888 San Francisco and a future Lucy and Wyatt coming to the 2018 timeline. As these future time travelers explain in "The Miracle of Christmas," the world without Rufus is grim since he's necessary to stop Rittenhouse. So just as a future Lucy once gave Flynn her journal, she now presents it to Wyatt. And after the gang follows Rittenhouse to 1848 Sacramento, Wyatt realizes that they only way to stop Rufus from dying in the first place is to not save his wife (and Rittenhouse agent) Jessica.

While Wyatt believes it should be him to stop Jessica (who was lying to him about being pregnant), Flynn decides to take matters into his own hands: he goes back to 2012 and kills her. That then creates another timeline where Rufus doesn't get killed in San Francisco, and he triumphantly returns to save Lucy, Wyatt, and Jiya from the gold rush West with his best Home Alone impression.

However, it's not an entirely happy ending. Rescuing Rufus means Wyatt has to lose Jessica, and while no one but Wyatt has mixed emotions about that, the return of Rufus does, unfortunately, also lead to Flynn's death. Instead of traveling back to 1848 in the lifeboat, Flynn sends it back unpiloted (the upgraded lifeboat that future Wyatt and Lucy left them conveniently has autopilot) and gives himself one last glimpse of his family before he dies. His death hits Lucy the hardest, as her journal reveals she and Flynn did have a romantic relationship in the future. Now it will never be. But it's no real tragedy since, as Flynn reveals before his death, their romance didn't work out; Lucy's heart always belonged to Wyatt.

Because Emma is still alive, the gang isn't done defeating Rittenhouse just yet. They follow the mothership's trail to North Korea in Dec. 24, 1950, but Agent Christopher and Connor Mason discover that this mission is just a Rittenhouse trap that leads to the deaths of Lucy, Wyatt, Rufus, and Jiya. So while there was a lot of story to wrap up, fans still got another major time-traveling adventure in the finale.

After that, Agent Christopher enlists Lucy's biological father and Rittenhouse member Benjamin Cahill to find Emma in the year 2018. She then takes the mothership to 1950 to save her four time travelers. Emma tries to bring Lucy to the Rittenhouse side one more time by offering to bring back Lucy's sister, Amy, but Lucy refuses. Emma is then killed by the Chinese army while everyone else escapes.

With that, Rittenhouse is defeated and Lucy, Wyatt, Rufus, Jiya, Agent Christopher, and Connor can go back to their normal lives. (Well, as normal as it can be for people who know that time travel exists.) Fitting for a show about time, Timeless then does a time jump where Lucy and Wyatt are married with two daughters and Rufus and Jiya are still together and have started their own company. But their time traveling days aren't completely behind them. In order for everything that happened on Timeless to happen, Lucy needs to give Flynn her journal. So Lucy, Rufus, and Wyatt take the O.G. lifeboat from 2023 to 2014 to pay Flynn a visit. Based on Lucy's journal, the series then shows how Flynn stole the mothership, which set off all of the events of Timeless in the first place.

Time is cyclical and the Timeless finale really does bring everything full circle. And while the exact science surrounding the different timelines is (as per usual with shows and movies dealing with time travel) a bit confounding, the two-hour movie left nothing unanswered. That doesn't change the fact that the beloved series has come to an end, but it shows how important the showrunners Eric Kripke and Shawn Ryan thought it was to give the characters and fans closure.

Plus, just because Wyatt, Lucy, and Rufus may not time travel again doesn't mean no one else ever will. As Connor notes, the technology exists, so another person will create a time machine. Rufus meets a young woman at a science fair in the year 2023 who has created a Leyden jar capacitor. In the final moment of the series, she is shown working on plans for her own time machine. So even though it may not be Rufus, Wyatt, or Lucy, someone in the Timeless universe may just change history again someday.