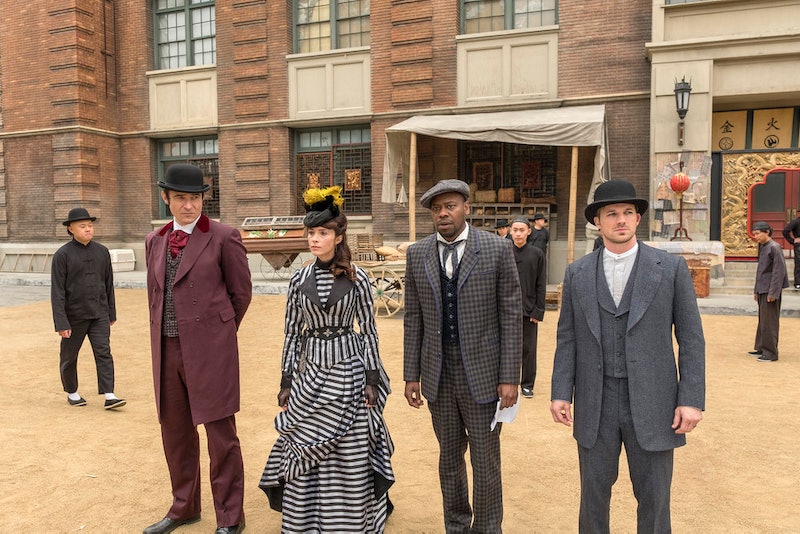 Happy holidays, #ClockBlockers! NBC is sending you exactly what you want this year by finally revealing when the Timeless series finale will air. As reported by The Wrap, the network announced on Friday, Oct. 26, that the two-hour Timeless movie will premiere Thursday, Dec. 20. The supersized series finale is set to give this fan favorite show a proper ending, while also treating viewers to one more time-hopping adventure.

"Spread across three centuries and two continents, the finale will test Lucy, Wyatt and the entire Time Team like never before as they try to #SaveRufus, preserve history and put a stop to Rittenhouse once and for all."

As for that holiday season air date, it sounds like it was chosen deliberately. Per the network's press release, executive producers Eric Kripke, Shawn Ryan, and Arika Lisanne Mittman are "promising fans an epic, unforgettable thrill ride through the past, present and future, with a healthy dose of Christmas spirit." Could that be a hint about the plot? Maybe the Time Team will be visiting a significant Christmas past.

No matter where this last journey takes them, what's most important is that they save Rufus, resolving the Season 2 cliffhanger that left fans once again calling on NBC to save Timeless. Even though their efforts didn't result in another full season, they did ensure that this show about the unsung heroes of history will get a proper sendoff. And if the reactions on Twitter are any indication, the fandom is ready to see the two-hour finale in all of its glory.

The two-hour Timeless finale is set to bring back all of your favorites, including Abigail Spencer, Matt Lanter, Malcolm Barrett, Goran Višnjić, Paterson Joseph, Sakina Jaffrey, and Claudia Doumit. According to TVLine, part one of the episode will be written by Lauren Greer, while showrunner Arika Lisanne Mittman will pen the second and final hour. Well, it's meant to be the final hour, but with Timeless, you never know,

Fans have already rescued the show twice, and their passion for the time travel series is showing no signs of slowing down. While NBC seems set on the movie being the show's swan song, the buzz on Twitter is still all about finding a new home for the Time Team. Even the Timeless writers' room account tweeted:

"You did it #ClockBlockers! We'll see you on Thursday December, 20th as we try tog et Rufus back! Spread the word, build the fanbase and let's make this a big Christmas Party! #Timeless"

Hmm... that sounds like a fandom that's not giving up on their show. Whether or not a Season 3 ever happens, though, the two-hour finale is set to give viewers closure, possibly offer Rufus a second chance at life, and take the team on one more major trip through time.

That's not a bad outcome for a show that's been resurrected twice. Go ahead and block off Dec. 20 now, #ClockBlockers, because there's a Timeless movie coming your way just in time to wrap up 2018 right.