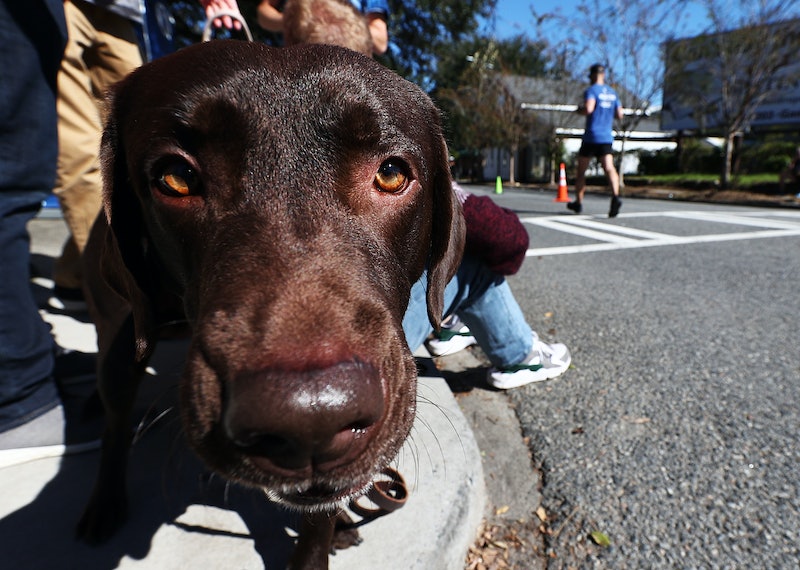 The dog park is full of cute pups and unique names. A primped and polished Bichon Frise could be called Frank. And so could a shaggy, happy go lucky Golden Retriever. What you hear being yelled out across the dog park could depend on the most popular dog names of the year. The 2018 names are in, and they're so cute you might just want to march down to your local rescue shelter to name your new best friend.

Dog names are often tied to what your furry friend looks like or acts like. Or maybe it's just a classic. No matter what you dub your pup, they always seem to grow into their title, filling it out with spunk and spark. (Especially if you name your dog Sparky!) And no matter how different or ironic you try to be, there will always be a million Max's across all the breeds.

According to Rover.com, an online network connecting dog owners with pet sitters and dog walkers, there's a new batch of popular dog names. And the list is topped with two names you might be very familiar with. The just released report, which is based on the names registered in their database, has scientifically concluded that Max and Bella are the dog names you'll hear most at the dog park.

You might have already met a million Maxes, but the name is timeless. A classic name for a loyal best friend. Even Dr. Seuss' grumpy Grinch had a beloved dog/sidekick with the name. Bella, a name translating to "beautiful", is appropriate for any dog. Because all dogs, in my honest opinion, are beautiful creatures deserving to be called the accolade every time dinner is ready. The name sits on the top of the list next to Max.

Rounding out the most popular dog names of 2018 are Cooper, Buddy, Charlie, Rocky, Jack, Duke, Bear, Tucker, Olivier, Lucy, Luna, Daisy, Lola, Molly, Sadie, Maggie, Bailey, and Stella. All sweet names that you've probably heard before regardless of breed or gender of the doggo. While Duke seems fitting for a regal Great Dane, it could also suit a pocket sized Yorkshire Terrier. Hey, little dogs can have big personalities fit for a, well, Duke.

According to this extremely important research, Rover.com reports that retro names like Minnie, Harry and Pearl are up 17 percent from last year. Some retro names you might want to name your funky, cool dog in 2019 are predicted to be Edna, Myrtle and Florence. But if you're more into beanies, flannels and cold brew, your trendy dog could be better suited for a hipster appropriate name, which are apparently on the rise. These names include Soy, Oak and Bae. Ironic!

It's also reported that "pet parents draw inspiration from their favorite TV shows, movies and music." With so much quality content circulating our streaming devices it's no wonder that pop culture inspired names make up 16 percent of popular dog names. It's likely you'll meet a dog named Cardi. The record breaking rapper's name has increased by 1,250 percent in 2018 amongst canines. Which seems like another broken record to me.

Inspiration for the good boys were also drawn from legendary bad villains like Darth Vader and Pennywise. Dogs were also commonly named after royals like Harry and Meghan as well as food, such as Muffin and Biscuit. All of these names, though some more popular than others, are good names suitable for all good dogs.