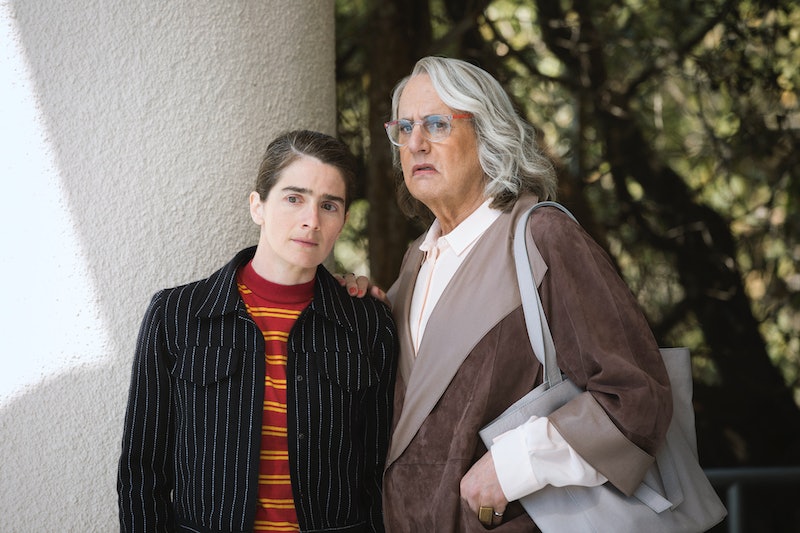 The Pfeffermans' return to screens in Transparent Season 4 likely feels like coming home again for many viewers, which incidentally is a theme on which the new episodes touch. It's hard not to watch the show without being affected by it, but speaking to Bustle at a press junket for the new season, cast members Judith Light, Amy Landecker, Rob Huebel, Gaby Hoffman, and Jay Duplass and show creator Jill Soloway reveal how Transparent has changed their lives significantly and uniquely.

Season 1 showcased the family's patriarch's (Jeffrey Tambor) coming out as transgender and letting her family meet her true self, Maura. Light, who plays Maura's ex-wife Shelly, says that this story arc of self-discovery became an impetus for not only the show's characters to deeply examine themselves, but also for its cast, crew, and audience.

"Maura said ‘I will be this person, I am this person I will be living as this person’ which kicks off everybody else in the story, in the family," Light explains. "She says ‘this is who I am’ and then the question is: 'who will you be? Will you wake up? Will you be conscious? Will you be the person that you want to be in this life?'"

"So much of your life you’re figuring out through your character."

The award-winning actor feels the impact in herself, she confirms. "It inspires me in my life to make sure that I am still searching, looking, for the places where I have closed myself off to, not used my voice, not found myself empowering myself, in my life, in the world, and in my work," she says. Light also calls her character Shelly "a great mentor."

Hoffman, who plays youngest child Ali Pfefferman, also feels inspired by her character's openness to transformation. "We’re both you know, seeking and looking and asking and wondering and know that there’s still something much bigger that we’re heading toward, which I hope I always feel in life," Hoffmann says.

For Landecker, who plays Sarah, the oldest sibling, Transparent has taught her great deal about her own sexuality. "It opens your eyes to different lifestyles, and I think it’s totally normal to be like, ‘huh maybe I could, you know, why not? Maybe it all doesn’t have to be one way.'" the actor actress says, adding that she became more open to the idea of a non-heterosexual relationship, only to later realize she's "just so wildly hetero in my body."

Still, this kind of self-introspection about one's own sexuality demonstrates how deeply felt Transparent is for its cast. Huebel plays Sarah's partner, Len, and explains, "So much of your life you’re figuring out through your character."

For him, the personal impact of the show goes beyond what Duplass experiences through his character, Josh. "I don’t know if my character has shaped me as much as just the experience of being in this show of being in this family, of like being Gaby [Hoffman's] brother now basically in real life — those are the things that have transformed me," he says. And as a filmmaker himself, Duplass has also internalized "Jill [Soloway's] methodology of creating art," he says. He's taken those priorities that he now shares to his other projects, especially when it comes to voices they're championing. "My brother [Mark Duplass] and I have a show called Room 104 on HBO, and more than half of the directors are female and there’s people of color starring in the episodes," Duplass says.

The show's exploration of gender identity and emphasis on bringing trans people to work on Transparent, both on and behind the camera, has opened up Huebel's world. "I can’t say that I knew a lot of trans people before the show," he says. Soloway, who is non-binary themselves, calls the series "a trans-affirmative action hiring program, where we’re actively looking for trans people and gender nonconforming people." They point out that many crew members wear stickers on set that communicate their preferred pronouns.

That Transparent has inspired its cast to question the normative identities which are thrust upon people from birth isn't actually a great surprise. Soloway is able to understand the family as a microcosm for society and its structures, and then transform that to art.

"I think people are trying to figure out how to move through the world and feel good, and a lot of times when people are addressing what they want to change about themselves they’re starting with looking at where they come from, consent — not just sexual consent but if you grew up in a family as a child what are you consenting to?" Soloway says. "When you’re a kid and you’re born into a family you don’t really get to consent. How you’re treated, how you’re gendered, in a less extreme case how you’re seen by the people in the family."

Thanks to their willingness to ask deep, loaded questions like these, Soloway and the whole cast of Transparent serve as concrete examples of exactly how much work can be done to create and understand one's own identity, free of commonplace identifiers and walls. Whether or not audiences wish to do this work is up to them to decide, but the fact that this cast and crew engages in boundary-pushing discussion certainly creates room for others to do so too.

More like this
'That '90s Show' Star Callie Haverda Got Advice From Mila Kunis & Ashton Kutcher
By Brad Witter
Ozzie’s Coming Out Scene With Kitty On 'That ’90s Show' Has Twitter Sobbing
By Brad Witter
Keyla Monterroso Mejia Is Finally The Star Of The Show
By Gabrielle Bondi
At 28, Rosie Perez Risked Her Career To Stop Playing Stereotypes
By Gabrielle Bondi
Get Even More From Bustle — Sign Up For The Newsletter
From hair trends to relationship advice, our daily newsletter has everything you need to sound like a person who’s on TikTok, even if you aren’t.