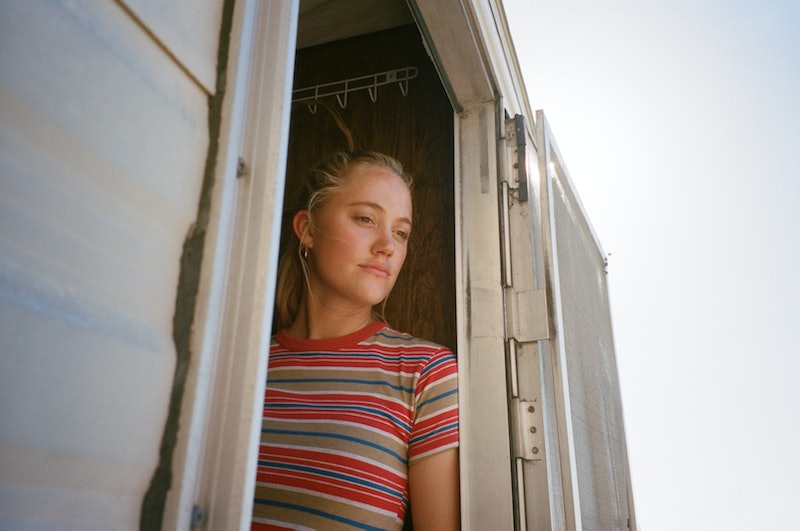 The holidays can be a hard time for those who don't get along with their family members or who have tumultuous relationships with their biological relatives. Some people maintain threads of connections with family during the year, while others simply trudge through this season like hiking through mud. But many opt out of their own families altogether, choosing instead to find their own tribe for a better, more supportive, and stable environment. The Tribes of Palos Verdes, a new drama opening Dec. 1, follows the story of one young woman whose biological family fails her, and who sets out on her own to make her own personal connections, highlighting just how important it is that we make our own tribes and find the stability that we need in our own lives.

Spoilers ahead! The film stars Maika Monroe as Medina, a teenage girl whose family has just moved from Michigan to the affluent California coast town of Palos Verdes so that her father, Phil (Justin Kirk), can expand his surgical practice to wealthier clients. Jennifer Garner, in one of her most powerful performances yet, plays the family matriarch Sandy. Her mental illness is not totally evident at the start of the story, but her depressive "black holes," as she calls them, and manic episodes, escalate as the film goes on. Medina's closest relationship is with her twin brother, Jim, played by Cody Fern. They share an undefinable twin connection that binds them throughout their family's rocky periods; it's really the only relationship on which Medina can rely.

But the move that was intended to be a healing element for the family proves devastating for them all. As it turns out, it was Phil's cheating that led to the cross-country relocation, and the new California locale provides more temptation, not less. His affair turns serious, and divorce becomes inevitable, with Phil trying to explain to his kids that his "last chance" at happiness requires him abandoning them for a new family. Sandy's depression and psychosis turn her into a homebody whose delusions become dangerous, yet she refuses to get help. As Phil and Sandy try to turn their kids against one another, Jim, meanwhile, turns to drinking, drugs, and hanging out with surfer gangs who beat up "interlopers" looking to surf on "their beach."

All the while, Medina develops her own surfing routine, growing better and better at the sport, and rejecting the misogyny that accompanies her attempts to break into the scene. It's a classic escape maneuver; as her family falls apart, Medina must find an outlet for her emotions, her rage, and her own sadness. The surf becomes her family, and though she makes mistakes along the way, her search for outlet will be familiar to anyone who can't count on their own parents or siblings. Being new to town, Medina also doesn't have many friends. Her loneliness amplified by Jim's betrayal, it becomes clear to her that her family isn't actually her "tribe," and she has to find another on her own.

For many people, the decision to move away from one's biological family to a makeshift one, out of desire or necessity, can be incredibly challenging. But sometimes, it's the best choice that can be made. In Palos Verdes, Medina's family definitely treats her poorly, and though she had a deep connection with Jim, his drug abuse leads him down a path where Medina can't follow. It's one thing to endure family troubles when all members are working together towards a solution, but it's totally different when the relationships become toxic, and sometimes opting out altogether is the only choice.

Medina's family dynamic is one echoed throughout multitudinous families across the world, no doubt, so it must be comforting for a film like The Tribes of Palos Verdes to reflect what so many might be going through. It's impressed upon us as we grow up to "find our tribe," and naturally we assume that that means we should stick with friends we can trust, love, and respect. But with the holiday season coming up, remember that finding your tribe can also mean creating your own family when the one you were born into is more damaging than supportive.