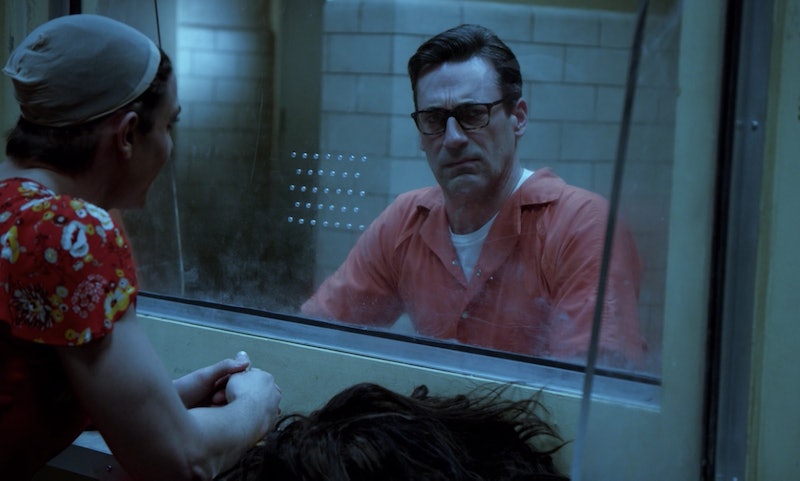 Spoilers ahead for Unbreakable Kimmy Schmidt Season 4 Part 1. Season 4 of Unbreakable Kimmy Schmidt breaks from the main action for an episode focusing on one DJ Fingablast (Derek Klena) as he tries to uncover why his DJ idol is in jail and then to prove his innocence. The catch: that idol just happens to be the Reverend (Jon Hamm) who kidnapped Kimmy and the other girls. In a particularly ridiculous half-hour, Unbreakable Kimmy Schmidt's true crime parody (Episode 3 of the new season) totally captures the carefully orchestrated drama of those documentaries.

Not to go full "Stefon from Weekend Update," but this episode has everything: an adorably clueless protagonist/filmmaker who quietly walks onscreen at the very beginning to deliver a mysterious monologue that sets the stage, a dramatic opening credits sequence full of blurry trees and shots of birds, and plenty of flashbacks recorded on terrible quality early '00s handheld cameras.

The doc follows the DJ as he hunts for DJ Slizzard — the man who influenced him to become a DJ in the first place back when Fingablast (or, uh, Doug) was a kid — in the hopes that Slizzard will agree to perform at his wedding. When he heads to Indiana to find the man himself, Fingablast discovers that Slizzard in jail for the kidnapping of Kimmy and the others, and sets out on a mission to discover what exactly happened.

If you've browsed Netflix anytime in the past few years (and you have, if you're watching Kimmy Schmidt), you've encountered your fair share of true crime documentaries. There's been a boom of them lately — Making A Murderer; Wild, Wild Country; Evil Genius; Amanda Knox — you name it. Mostly all of them follow a lot of the same themes and utilize some of the same filmmaking methods, many of which Kimmy Schmidt aptly put to use in this episode.

There are news reports clipped in amidst prison footage, police interrogations, security camera footage from grocery stores, and also DJ Fingablast's own handheld camerawork. He's shown pensively skipping stones in a lake while he contemplates all the things he's learned about Reverend Richard, and all the while his voiceover plays, pondering where the doc should go next.

DJ Fingablast even brings a little Catfish into the mix as he put on a disguise and woos the Reverend from afar, eventually appearing at the prison dressed as a woman. He eventually is brought to the Reverend's side, becoming convinced that he's innocent and is wrongfully in jail. Then, it gets even weirder. He lays out the case on bulletin boards with string connecting all the different parts of the plan to clear the Reverend's name; in almost every way, the DJ hilariously embodies the kind of dedicated, passionate voice that's usually narrating these kinds of films.

The urgency, the mystery and the absurdity all mesh seamlessly together for some of the funniest moments of the season, and a major part of its appeal is that you've seen so much of this before. Complete with in-prison interviews with the Reverend, and a cryptic ending that doesn't tie up any of the loose ends of the ongoing story, the doc concludes with DJ Fingablast walking away in slow motion, asking everyone to think about what they've just witnessed.

It's not often that a show with only half-hour episodes will feature an entire installment completely absent of its main characters, but Kimmy Schmidt pulls it off. Kimmy, Jacqueline, Titus and Lilian aren't present for the bulk of this episode, and their stories aren't further explored in its narrative, but the doc does grant the context and the conflict necessary for Kimmy to continue fighting against the Reverend.

Between poking fun at the hugely popular true crime genre and paying a respectful homage to it as well, Episode 3 of Kimmy Schmidt's newest season is a welcome departure from the rest of the show.