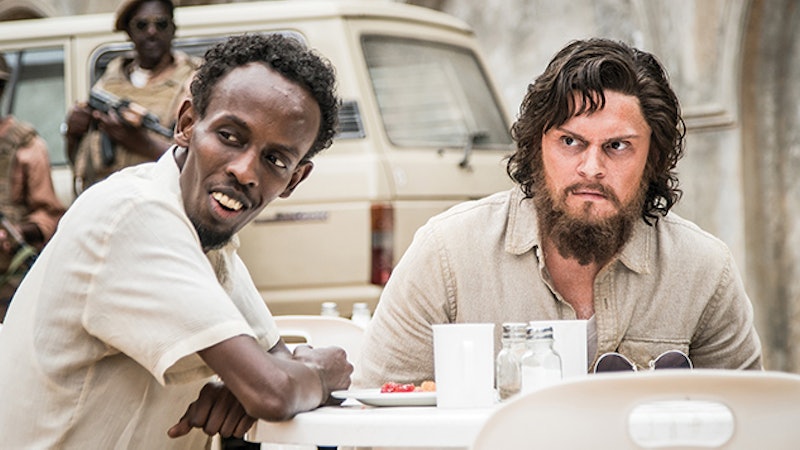 In 2008, Jay Bahadur wanted to be a reporter. He didn't go to school to hone his craft nor did he have much experience reporting (outside of conducting interviews for his market researching job). However, he was well-versed in rejection letters. Fed up with the traditional system of pitching to publications, Bahadur did something no other journalist would do: He went to Somalia to report on pirates. Though he had very little money, contacts, or story ledes to aid him, Bahadur was determined to offer personal, first-hand accounts and interviews with the Somalian pirates who were attacking American ships in open water. And he did. He did it so well, in fact, that he wrote an account of his travels, The Pirates of Somalia, that became a New York Times bestseller. And in 2017 his book was turned into a film: DABKA, starring Evan Peters, is about his exceptional journey, and it premiered at Tribeca Film Festival this year.

Bahadur's approach to achieving his dreams was anything but conventional, but it paid off in a huge way, and DABKA's director, Bryan Buckley, encourages young people to consider a version of Bahadur's fake-it-til-you-make-it approach.

"Jay is a really good example of someone who was not happy with his current situation in life. He took a massive risk, followed his heart, and brought about change," Buckley tells me over the phone. "This relates to many fields. There is such a great need for people like Jay to tell the other side, the true side, of the story."

But Buckley realizes that taking huge, life-altering risks it's easier said than done. Bahadur did not have a degree in journalism or writing, banking on real life experience to get him where he wanted to go professionally — and Buckley thinks he's all the better for it. "Education is one of those things where people get a degree, they get out of school, and then it's, 'What do I do now?' They buy into a system. Often we don’t awake until we are in our 30s: 'I should have done this, I should have done that,'" he says.

Buckley's advice to avoid self-doubt? Don't wait. If there's something you're passionate about, pursue it, and worry about money later. It sounds a little crazy — we all need to eat, after all — but his optimism is admittedly infectious. "You have to erase the idea of finance from the equation. You have to go with heart, and say, we'll figure out the money later," he suggests. "Jay is living a modest life now, but he's spiritually fulfilled. And he was able to do that by just pursuing something full-on. If you attack that thing from your heart, you'll be fulfilled. Maybe you have to take other jobs to make end's meet, but the experience will be something that you carry with you for the rest of your life. It applies to any discipline."

One of the things that made Bahadur's success possible was his willingness to bend the truth, or rather — bullsh*t — effectively. He never flat out lied, per say, but he did say "yes" to things he perhaps wasn't prepared or equipped for. When asked by a publisher if he had an outline of a book ready to go, he didn't hesitate to say "yes," even though it wasn't true.

Buckley sees this not as lying, but as a version of "optimistic truth." He explains: "When is it lying and when is it bullsh*tting? If Jay didn't [bullsh*t], then no one would believe him. He believed in the end game, and his intent was honest," he says. "As a director, every single day I have to bullsh*t. There isn't a day where I'm not in a position where I'm trying to be an optimist on a situation. You have to go with your instinct. Every one of us has in us the power to bring change if we so choose."

DABKA shows a reality in which having a confident outlook, a lot of courage, and a willingness to say "yes" at every turn can yield incredible results.