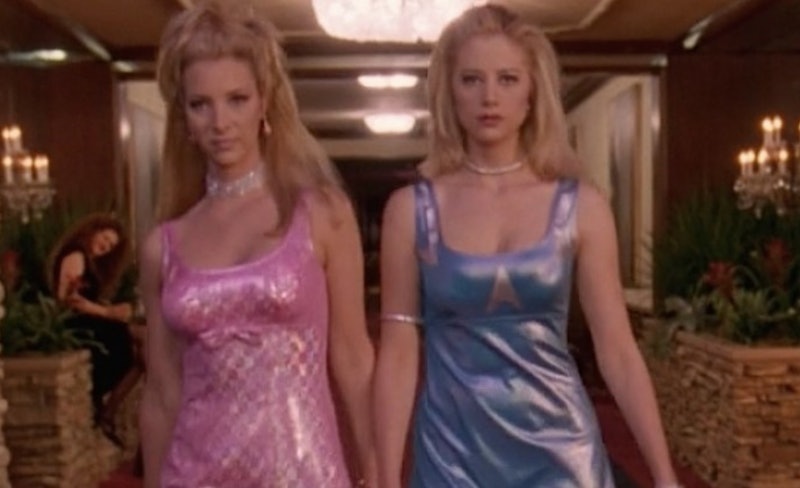 "Time After Time" is a classic song that hails from the '80s, but arguably defined the '90s. This is because of a little cult classic film called Romy and Michele's High School Reunion, which celebrates its 20th anniversary this week. The comedy, starring Lisa Kudrow and Mira White, perfectly captures the nostalgia (and dread) of revisiting the past at a high school reunion. The film's themes transcend generations, as does its iconic, sappy dance sequence with Kudrow, White, and Alan Cumming. When speaking with director David Mirkin about this blast from the past, he not only tells me the original dance concept was completely different than what ultimately came to fruition, but that it almost never happened in the first place.

"I had no idea whether I was even going to keep a dance sequence in the movie because it didn’t have a meaning to me," the director admits. And for 1997, the concept was considered peculiar. "It was polarizing in the testing. When you do something different and strange like that, there’s going to be a lot of people who react very negatively to it initially," he says. "Over time, people were surprised at how they could appreciate how silly/funny/stupid it was." After knowing how iconic the scene ultimately became, it may be hard for fans to envision the original concept brought to the table.

"In the original script, there was a suggestion of a disco dance that was an homage to Saturday Night Fever and John Travolta," Mirkin tells me. "[They'd be] in white tuxedos, etc. doing those moves. It wasn’t an emotional dance sequence." But if Mirkin was going to do this, he wanted to do it right. So, he not only infused emotion, but changed the decade.

Mirkin says he tied the sequence to an earlier part of the script when Romy gets stood up at prom waiting to dance with Billy (Vincent Ventresca). Fans see Romy's heartbreak and Michele is there to catch her, better yet, dance with her. "One of the things I wanted [was] to see Romy and Michele really taking care of each other." This is what led to choosing the song "Time After Time," which was no easy task.

"It was really important to have the right song for the women to hear. I listened to every single song from the decade of the '80s," says the director. "The only song that had the proper emotion and also had the perfect lyrics was 'Time After Time.' There was nothing that came close to that song." Clearly, the choreography is tailored to the tune, which exaggerates the scene even more. "They’re dancing a playback to that song. The choreography takes the lyrics in mind."

Although the dance wasn't in the original plan, and Kudrow lacked a dance background, Mirkin says all actors were completely game, rehearsing over an hour a day for multiple weeks. "It’s not so over-the-top perfect, but it has a level of skill that’s hilarious," he says. The scene impacted Mirkin as much as it did fans, as he tells me it was one of his fondest memories from entire shooting experience.

More like this
The 'Hocus Pocus' Sequel Finally Has A Release Date & It Makes Total Sense
By Shannon Barbour and Radhika Menon
Everything To Know About 'My Big Fat Greek Wedding 3'
By Grace Wehniainen
Emma Thompson, Lashana Lynch, & Stephen Graham Lead Netflix’s 'Matilda'
By Sophie McEvoy
Alicia Silverstone Has Recreated An Iconic 'Clueless' Scene
By Frances Stewart
Get Even More From Bustle — Sign Up For The Newsletter