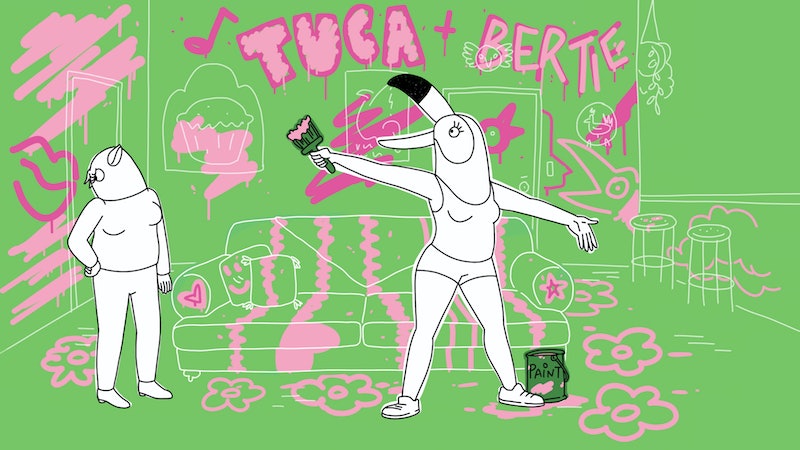 Although Tuca & Bertie was created by the same team who did BoJack Horseman, Netflix's new animated series is much more whimsical than its predecessor — think an animated Broad City with a bit more anthropomorphism. The same holds true of its music — as soon as you hear the first upbeat notes of the theme song and see the two main characters striding happily down the street, it's evident that the Tuca & Bertie soundtrack is just as much fun as its protagonists.

Instead of the dreamy saxophone that introduced BoJack, this track is much more bouncy and jovial, invoking the whimsical universe series creator Lisa Hanawalt has invented. And while the former theme song had no lyrics, Tuca & Bertie's features the two main characters (played by Tiffany Haddish and Ali Wong) saying their names over and over again and scatting along with the tune. According to IMDb, Jesse Novak composed the Tuca & Bertie score, and the show's credits reveal that while Andy Gowan is the Music Supervisor, Novak also wrote the Tuca & Bertie theme song.

Novak has also composed the music for BoJack Horseman, The Mindy Project, and Neo Yokio, among others. In fact, Novak wrote all of the music for BoJack except for the opening theme (written by Patrick and Ralph Carney) and the closing song, "Back in the '90s," which is by the band Grouplove, per the AV Club.

In fact, Novak said that he got his big TV score break with The Mindy Project and was later tapped for BoJack because he and series creator Raphael Bob-Waksberg went to college together, per the AV Club. "I was also, you know, not only a fan of Raphael but also I've been a fan of Lisa Hanawalt for years," Novak told the outlet.

Indeed, while Hanawalt was a producer and production designer on BoJack, Tuca & Bertie is her baby (which BoJack creator Bob-Waksberg executive-produces). Novak continued, telling the AV Club, "I love [Hanawalt's] books, I love her style.... A lot of the music I feel I continued in [BoJack] I started in that first week demoing for them because I felt that inspiration for a lot of the sound came from the visuals and feelings that I was already familiar with through Lisa and Rafael's work."

One particular song from Tuca & Bertie Season 1 is "I'm Losing My Sh*t" from Episode 4, which Bertie sings in a moment of panic. The timid songbird suffers from anxiety, and when Tuca drags her to a grocery store, that anxiousness escalates into full-blown panic, causing her to create a yoga mat fort until her best friend returns from taking care of her sex bug problem.

Unfortunately, it doesn't look like the Tuca & Bertie soundtrack is streaming anywhere in any official capacity. And while there's a fan-made version streaming on Spotify, its unclear whether the tracklist is accurate or not. However, fans can listen to some of the other theme songs Novak has composed on his Soundcloud, including Superstore, the Horsin' Around theme from BoJack, and more.

Furthermore, if fans want to relive more of the show's past hits, the BoJack soundtrack is streaming on Spotify and Apple Music, which audiences can listen to in all its surreal, dreamy glory. And although Tuca & Bertie shares an illustrator and composer with BoJack, Hanawalt emphasized that the two shows are very different and don't take place in the same universe.

But hopefully the Tuca & Bertie soundtrack will be released on streaming soon, because we need that upbeat theme song to listen to on the daily.