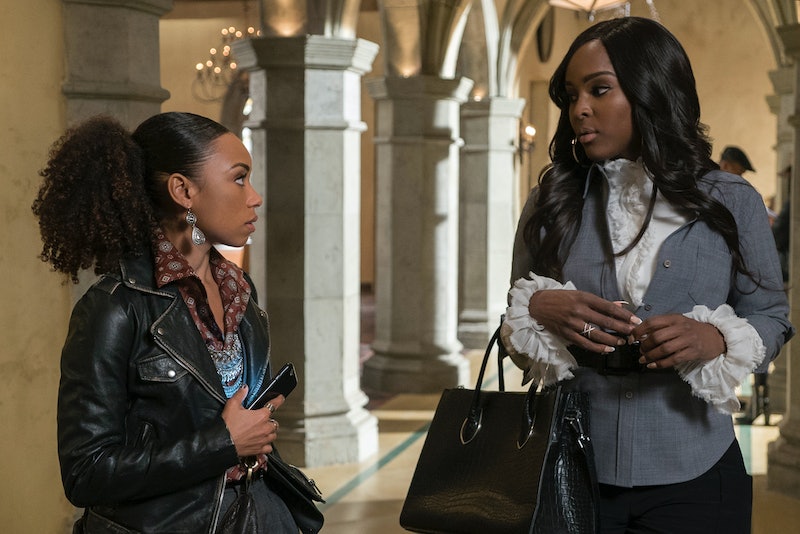 Even though hundreds of thousands of people get abortions each year, there aren't many movies and TV shows that actually address the topic. This year, though, there were 18 TV shows where women had or considered abortions, according to research from Advancing New Standards in Reproductive Health (ANSIRH). And, notably, many of those characters were women of color, whose abortion experiences aren't often portrayed on screen.

The 18 shows that ANSIRH identified as addressing abortion this year were: Star, Empire, Rise, Superstore, Trust, Dear White People, Claws, UnREAL, Insatiable, Burden of Truth, Law & Order SVU, Insecure, Mayans M.C., Big Mouth, The Gifted, The Deuce, A Million Little Things, and House of Cards. Of those 18 shows, not all of the characters actually had abortions. But of those who did, five were Black women, ANSIRH noted.

The CDC's most recent abortion data shows that 638,169 people had abortions in the U.S. in 2015. And according to research from the Guttmacher Institute, abortion rates are higher among women of color than they are among white women in the United States. And yet, as ANSIRH's report points out, many abortion stories on TV — before this year — tended to focus on young, white characters. Steph Herold, a data analyst at ANSIRH, explains to Bustle via email,

With that in mind, this year's list of shows that addressed abortion is noteworthy. The shows in which women characters did go through with abortions in 2018 were Empire, Claws, Dear White People, The Deuce, Star, and UnREAL. (That doesn't mean that all of the characters on the other series decided to carry their pregnancies to term, although some did. The remaining characters on the list of 18 shows also include women who revealed that they'd had past abortions, but whose abortions weren't part of the current season's storyline.)

The report cited Dear White People, Claws, and Empire as specific examples of showing "what it means to portray a Black woman's abortion experience." Dear White People, for instance, shows Coco's thought process as she considers whether or not to carry her pregnancy to term. She imagines a life where she gives up her own ambition to raise a child, envisioning them eventually attending school at Winchester, too. But Coco decides to get the abortion, and her decision is presented without judgment. These three shows depicted abortion in a real and thoughtful way, without taking a stance about the characters' actions.

Like Dear White People, Claws' abortion storyline didn't feature slut-shaming as Virginia decided to undergo the procedure. She also had the support of her boyfriend, Dean, as well as her nail salon coworkers, who shared their own experiences with pregnancy and abortion.

Still, it's also worth pointing out that a couple of the examples in the ANSIRH report also show characters who lie to their partners or to the public about the medical specifics surrounding their abortions.

In UnREAL, the report points out, Quinn tells Chet that her pregnancy includes "fatal fetal anomalies." But at the end of the series finale, Rachel says to Quinn, "There was nothing wrong with the baby, was there?" Quinn's reply seems to confirm Rachel's guess, as she says, "Doesn't matter. I wasn't meant to be a mother." Similarly, Claire Underwood tells the public in House of Cards that "the pregnancy was not viable" ahead of her third abortion, ANSIRH notes — but she reveals later that it was.

If shows like Dear White People and Claws continue to show abortion stories in genuine ways, it could help dispel some of the stereotypes and misconceptions that surround the procedure. Abortion is on the decline, but it's still a common procedure, and it's about time that TV shows reflected something that is a reality for many women in the United States.

More like this
'Bridgerton' S3 Teases Exciting Social Season For Penelope Featherington
By Bustle
How Is The British Royal Family Related To The Romanovs?
By Karen Fratti
Netflix Bumped Up The 'You' Season 4 Premiere Date — Here's What To Expect
By Bustle Editors
'Bridgerton' Fans Will Love ITV’s 'The Confessions of Frannie Langton'
By Maxine Harrison
Get Even More From Bustle — Sign Up For The Newsletter