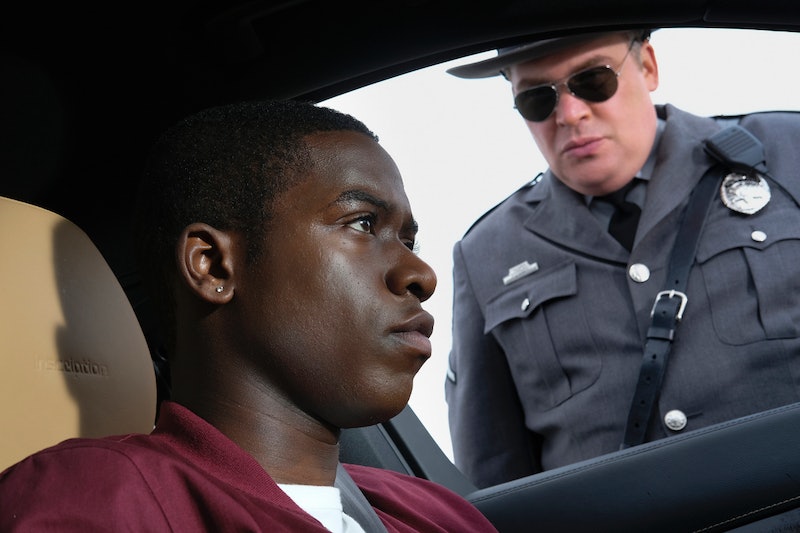 Spoilers for the “Replay” episode of The Twilight Zone. This week’s Twilight Zone episode tackles a real-life issue with a surreal twist. Sanaa Lathan stars as Nina, a Black single mom on a road trip to drop her son Dorian off at college. The trip takes a wrong turn when they are subjected to police harassment but time gives them multiple chances to make it to their destination. The Twilight Zone "Replay" episode addressed police harassment, respectability politics, the cycle of trauma, and solidarity against hate in a way that only Jordan Peele could pull off.

In the episode, Nina realizes her old-school video camera can rewind time, which comes in handy because a racist White State Trooper keeps trying to pull her and Dorian over during their trip. Nina tries various route changes to avoid interacting with the officer, but it always ends with her son getting hurt by this officer despite her best efforts to be polite and compliant. The officer’s actions become increasingly violent, so Nina rewinds back to strike up a conversation with him about her son's future plans as well as his personal life in hopes that her kindness will prevent another terrible encounter.

But, the officer still engages her in an argument and ends up fatally shooting her son. Nina ends up reuniting with her estranged brother, who helps them take an Underground Railroad-esque journey to the school. The officer shows up at the gate but Nina stands up to him with her brother, son, and the college community filming behind her and he is forced to back down because of their solidarity.

Nina’s backstory is a familiar one with her leaving her predominately Black neighborhood after having several loved ones killed by gun violence. She severed ties with her loved ones who chose to stay and decided she would build a life for her future family. Nina certainly wasn’t oblivious to the dangers her son could face but she did everything she could in hopes that he wouldn’t become yet another victim of senseless police brutality. But, it's never enough in a world where systemic racism runs rampant.

“Replay” is a strong reminder that a person’s socio-economic background, appearance, nor demeanor is a strong enough shield to break through the thick wall of racism. This officer was able to sit down and share a heartfelt conversation with her one moment and then murder her son with no hesitation minutes later because of his hate and fear.

This direct challenge to respectability politics is explored in TV shows like Black Lightning where Jefferson Pierce, a respected community leader and school principal with secret superpowers, is physically and verbally harassed by the police despite his sharp attire and cooperation. He has the powers to subdue them but he is unable to do so when he isn't in costume lest he wants to reveal his true identity. So, he is essentially at the mercy of the officers' actions. Cloak & Dagger Season 1 also focused heavily on police violence with protagonist Tyrone Johnson, whose brother's murder was covered up. His family later moved to a more upscale neighborhood and placed him in a nice private school, but it didn't change his reality of being a Black kid in America.

In real-life, there are countless incidents of Black people being harassed in their own "affluent" neighborhoods. For example, USA Today reported that actor Ving Rhames was held at gunpoint by California police officers at his own home after a neighbor said there was a "large Black man" breaking in - a situation that was safely de-escalated but could have turned deadly with the wrong officer.

The Twilight Zone differs from most actual and fictional accounts by giving these characters multiple chances to take an alternate path, come to certain realizations, and, in Nina’s case, confront her past to understand how that trauma and loss has affected her life. In reality, no one has a camera to turn back time, mount up a plan to fight back, and have a group of people to shame others who abuse their power into accountability for their actions.

The end of the episode is exceptionally sad with an older Nina hanging out with Dorian and the granddaughter that she hoped for years prior. She had beat the impossible odds of protecting her son's life and getting him through college and beyond. However, when her granddaughter breaks the beloved video camera, Nina falls to her knees in despair because the one thing that she believes can protect her son from harm is gone. And, as he walks out the door to go get ice cream, the flash of police lights are a reminder that there is no time, place, dimension, or universe where a Black person is truly safe.