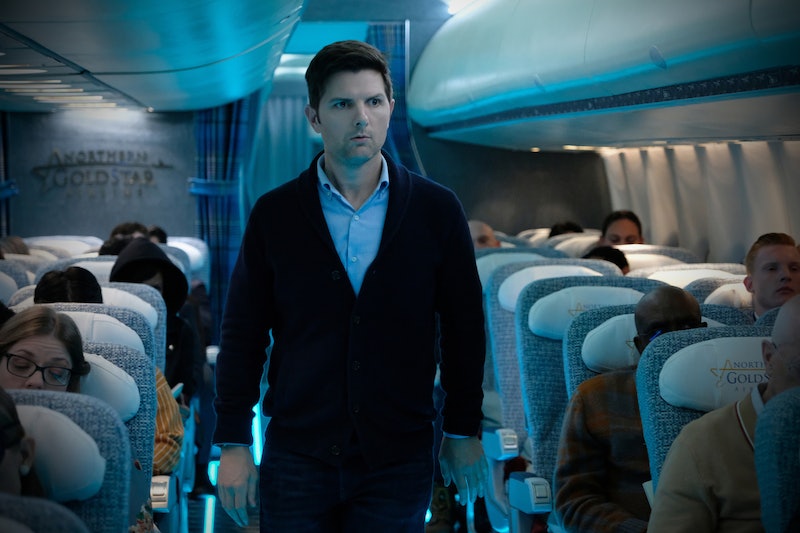 Essentially everyone on the planet has been eagerly awaiting Jordan Peele's take on The Twilight Zone, and now that the first episodes of the reboot have dropped on CBS All Access, there are already parallels being drawn to the esteemed original series. The Twilight Zone's "Nightmare At 30,000 Feet" episode is a direct homage to a legendary 1963 episode, "Nightmare at 20,000 Feet," starring William Shatner. The newer episode, starring Adam Scott, puts a new twist on the plot, but it's still just as spooky as its inspiration.

"Nightmare at 20,000 Feet," like its 2019 update, follows a distressed airline passenger who's convinced that harm is about to befall the plane. Pieces of the 1963 episode can be found on YouTube, and the full version is also available on CBS All Access. The men in both versions attempt to alert the plane's staff, and the people around them, that something bad is going to happen, and both are subsequently dismissed as anxious or just plain crazy.

Both men allude to the fact that they've previously had mental breakdowns in the past — Scott mentions it to an air marshall, and Shatner brings it up to his wife who's also on the plane — but both insist that it's not what's happening this time. There's also an element of twisting time in both episodes, though it's far more apparent in the 2019 version. Shatner's character unfolds a newspaper during his flight to find the news of a deadly plane crash — potentially alluding to one of his own — while Scott's character straight up listens to a podcast seemingly predict the future, outlining each and every detail of the crash he's trying to prevent.

There are stark differences between the two, though — Peele was obviously not gunning for a true remake. What's plaguing Scott and Shatner in their respective episodes is actually totally different. Shatner, in the original, keeps looking outside to see a mysterious monster on the wing of the plane, damaging the body of the aircraft. Yet when others take a look into the clouds, they see nothing, leading them to believe he's gone mad.

Scott, in the remake, encounters an entirely different struggle. He finds a retro iPod of sorts in his seat, and when he listens, he hears the aforementioned true crime podcast talking about a doomed flight — his flight. It even mentions his name as one of the passengers that supposedly had something to do with the flight's demise, and eventually, it leads him straight into a devastating self-fulfilling prophecy.

Shatner and Scott, as it turns out, are both correct in their claims that something terrible is happening. No one believes Shatner, but as the camera pans out to show the plane after it lands, it's clear that something has actually been damaging the exterior. And Scott's plane actually does crash, like he's warned everyone, though under far different circumstances than he expects.

Peele's re-envisioning isn't the first time "Nightmare at 20,000 Feet" has taken on a new life — John Lithgow starred in another version of the same story for the 1983 Twilight Zone: The Movie. And the entire story itself is based on a short story by Richard Matheson, author of classics like I Am Legend and former writer for the original Twilight Zone. His plot and the setting were enough of a nod to the original their own, but Peele also threw in what might have been a bona fide Easter egg for dedicated fans. The doll that washes up onshore near the end of Scott's ill-fated journey looks a heck of a lot like the monster that confronts Shatner through his window.

"Nightmare at 20,000 Feet" is one of the most iconic episodes of TV ever created, and it's only appropriate that it received the Jordan Peele treatment. Peele's take on The Twilight Zone manages to pay homage to the classics while taking on a life of its own, and "Nightmare at 30,000 Feet" is all the proof you need of that mission.