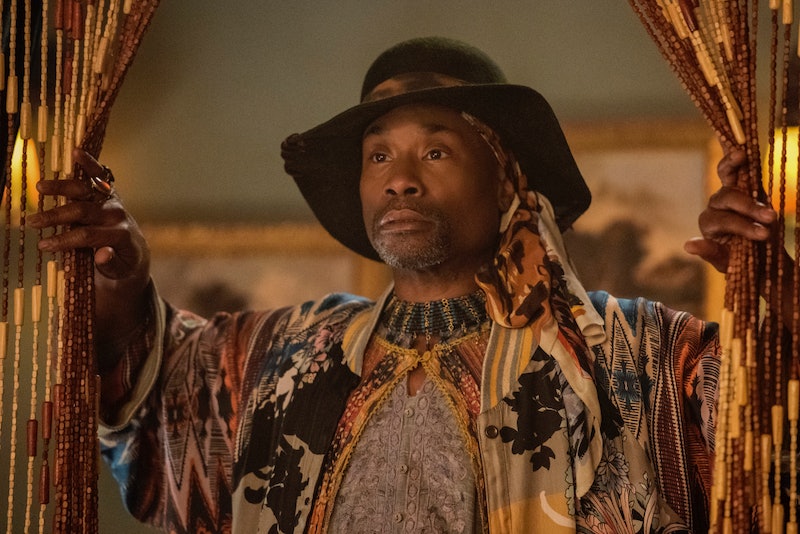 Get ready to cross over: Jordan Peele's spooky reimagining of The Twilight Zone is back with more terror, mystery, and timely sociopolitical themes. The anthology series features a different writer and director each episode, as well as a different set of actors. Season 1 featured celebs like Kumail Nanjiani and Seth Rogen, and The Twilight Zone Season 2 cast is similarly filled with stars — as well as a few relative newcomers. See a few of the highlights below.

"Downtime" is notable in that it's the one episode in Season 2 written by Peele. The episode stars Deadpool and Gotham's Morena Baccarin alongside Euphoria's Colman Domingo (who played Ali, the man who tried to help Rue stay sober). Per ET Online, Baccarin plays Michelle, a hotel manager who begins to notice strange personality shifts in the people around her. Worse, her husband, Domingo's Carl, seems to morph before her very eyes due to a haywire "downtime signal."

"The Who of You" stars Grace and Frankie's Ethan Embry as Harry, a failed actor and boyfriend who discovers he has a power that can drastically change his situation — if he's willing to ruin a few lives along the way. Opposite Embry is Graceland's Daniel Sunjata, a dogged detective who's tasked with figuring out what Harry is up to. The episode also features Pose's Billy Porter, who plays a fortune teller Harry and the detective end up running into along the way.

"Meet in the Middle"

"Meet in the Middle" seems to be a study of male privilege, anger, and ownership. Fittingly, it features Jimmi Simpson, who played the younger version of the sadistic William in Westworld. His character Phil has no luck with women (because they always seem to have faults) but then he realizes he has a mental connection with Community's Gillian Jacobs. The two forge an unexpected relationship, but neither are exactly who they appear to be, and things take an expected swerve by the end.

Probably the strangest episode, "You Might Also Like" features Boardwalk Empire's Gretchen Mol as Mrs. Warren, a harried housewife who realizes her enigmatic Egg device is causing her serious problems. It's a trippy sci-fi episode that feels most reminiscent of Rod Serling's original series, even featuring throwbacks to old commercials. It also stars Greta Lee, the "sweet birthday baby" friend from Russian Doll, who plays an eerily similar role as Mrs. Warren's unbothered next door neighbor.