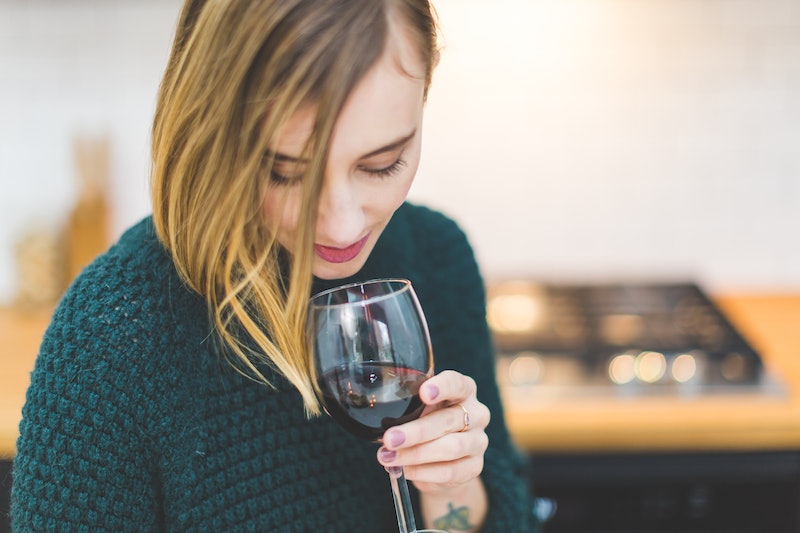 We’ve all got that one thing we don’t ever drink because it makes us overly emotional, right? “Oh no,” you might say, “I never drink tequila. I get all weepy when I do.” And, it turns out, there’s a reason for that — although it may have less to do with the actual tequila and more to do with how your body reacts to hard liquor in general. A new study has determined how different types of alcohol affect your emotions — and, as an added bonus, this new and exciting information might also might help you figure out what to partake in and what to ignore at all those holiday get-togethers you probably have coming up over the next few months. Isn't science great?

The study, which was published in the journal BMJ Open, used data gathered by the Global Drug Survey; accordingly, nearly 30,000 participants from 21 countries make up the sample size, all of whom were between the ages of 18 and 34. (Worth noting, though, is that “the sample is opportunistic and non-probability samples cannot be considered representative of more general population groups, as the study authors put it.) And it appears that, for each of four families of alcohol type — spirits, red wine, white wine, and beer — the type of booze you drink can push and pull on your emotions in different ways.

The study looked at four “positive” emotions (how energized, confident, relaxed, and sexy a drink made someone feel) and five negative ones (whether a drink made them feel tired, aggressive, ill, restless, or tearful). Here’s what respondents reported feeling when drinking each of the four types of booze in question — and what you might therefore feel when you drink them yourself:

If you drink the hard stuff, you’re much more likely to feel energized, confident, and sexy; those three emotions clocked in at 58.36 percent, 59.08 percent, and 42.42 percent, respectively. You’re also, however, pretty likely to feel ill, according to the 47.82 percent response rate for that particular negative emotion. The scores for aggressiveness, restlessness, and tearfulness don’t look like much on their own, particularly in comparison with all those other scores we’ve already looked at here — they measured at 29.83 percent, 27.81 percent, and 22.24 percent — but those percentages are much higher than they are for all of the other beverage options; so, it’s safe to say that drinking, say, whiskey will probably make you feel more aggressive than, say, drinking merlot will. The only emotions that didn’t have disproportionately high percentages are tiredness and relaxedness.

If you want to chill out, fill your glass with red wine; at 52.8 percent, it landed the highest rate of reporting for feeling relaxed out of any of the other options. Additionally, only 2.57 percent reported feeling aggressive after drinking red wine, and only 5.18 percent reported feeling restless. Conversely, though, you might also get sleepy or a little low-energy from a red wine tipple; tiredness has a whopping 60.08 percentage, while feeling energized only rates as 7.14 percent.

White wine doesn’t have nearly as pronounced an effect on your emotions as… well, pretty much anything. The percentages are all low to mid-range, with very similar scores to red wine in terms of confidence (28.27 percent), sexiness (23.73 percent), aggressiveness (2.74 percent), illness (14.50 percent) and restlessness (6.43 percent). You also probably won’t get super sleepy drinking white wine — tiredness scored 18.44 percent — or tearful (18.44 percent); nor, however, will you be energized by it (15.07 percent). Probably the most likely thing that will happen is you’ll relax a bit (32.67 percent) — although not as much as you would if you drink red wine instead.

Beer had perhaps the least remarkable effect on most people: Although it can boost confidence and relax you a bit, as evinced by its percentages of 44.54 and 49.87 respectively, and maybe make you a little sleepy (hi there, 38.92 reporting rate), the beverage’s scores in everything else where wholly ordinary, especially in comparison to some of the other options on the list: Spirits will make you more energized, ill, aggressive, and restless; spirits and red wine will make you more tearful; and both kinds of wine will make you feel sexier.

But What About Your “Drunk Personality?”

Not going to lie: I’d be interested to see how the effect these boozy drinks have on your emotions measures up against that study from a few years ago that found there were four types of "drunk personalities." For example, although the Hemingway personality insists that those who have it don’t change at all when they’re drunk, it’s worth noting that the personality type got its name from the Hemingway quote about his being able to “drink any amount of whiskey without getting drunk.” According to the current study, though, drinking whiskey ups a whole hosts of emotions, from confidence to aggression. So, is the Hemingway drunk personality only A Thing for people who don’t drink actually whiskey or other spirits? Or... not? And if not, how does your personality affect which of those emotions tends to come out when you drink certain things?

Furthermore, the study does point out some of its limitations: We don’t know, for example, how much of the effects were due to the drinks themselves versus the contexts in which the drinks were consumed (did social situations change anything?), or whether someone’s expectations of what would happen to them when they drank a specific beverage had anything to do with what they felt after drinking it.

The bottom line is that I have a lot of questions about the study and its results, and although the whole thing is fascinating, those questions can unfortunately only be answered by further research. But, I mean, hey — at least all those questions do give us some more angles that further research actually could explore. Anyone feeling up to the task?

In the meantime, have fun, but drink responsibly!