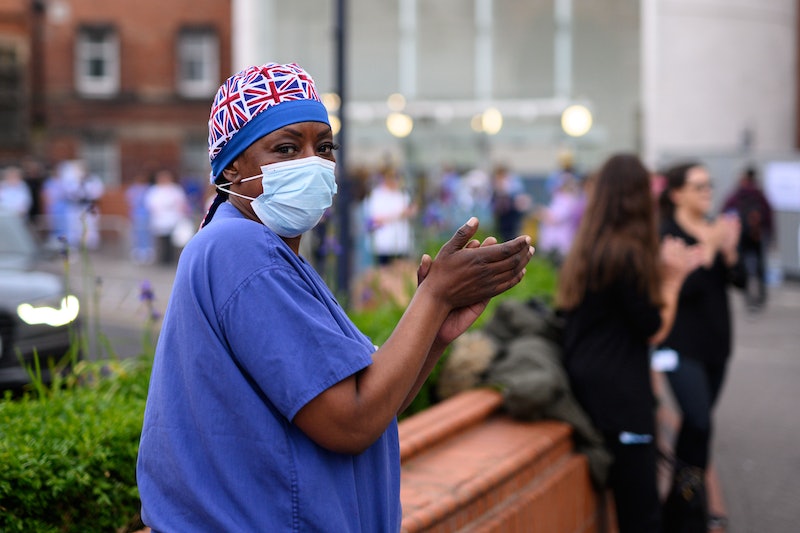 When COVID-19 became a global pandemic, it was initially thought of as an equaliser. We were told it didn’t discriminate, as anyone was capable of getting the virus. But soon reports and studies surfaced that showed those affected by COVID-19 were actually more likely to be from society's most marginalised groups. In the UK, Black, Asian, and minority ethnic (BAME) communities are more likely to die from COVID-19.

Reports that NHS staff from BAME backgrounds were dying disproportionally began to surface in early April, with the first 10 doctors to die from the virus being from Black, Asian, and minority ethnic backgrounds. Statistics soon showed minority groups within the "BAME" umbrella were being affected at different rates. On May 1, the UK’s Office for National Statistics (ONS) reported that Black men are 4.2 times more likely to die from coronavirus than their white counterparts and Black women are 4.3 times more likely.

As an Institute for Fiscal Studies review from May 1 states, “the impacts of the COVID-19 crisis are not uniform across ethnic groups, and aggregating all minorities together misses important differences.” Black Caribbeans were more likely to die from COVID-19 compared to any other ethnic group including Black Africans, while Chinese and mixed ethnic groups reported fewer hospital deaths even compared to the white majority.

Many called for a public inquiry into the deaths and answers as to why COVD-19 is disproportionately affecting BAME people. Early in May, Health Secretary Matt Hancock said a formal review would be released by the end of the month May, stating: “We recognise that there has been a disproportionately high number of people from Black and ethnic minority backgrounds who have passed away, especially among care workers and those in the NHS.”

The review was due May 29 but at the time of writing (11.30 a.m. on June 2) still hasn’t been published. According to Sky News, the review was initially put on hold until Wednesday (June 3), but now it's been the revealed the wait will be even longer. Sky's government sources have said the second delay is due to “worries” around “global events” and the "close proximity to the current situation in America". Over the last days, protests have broken out in the U.S., UK, and across the world in response to deaths of Black people, including George Floyd, and in support of the Black Lives Matter movement.

A spokesperson told Sky News: "Ministers received initial findings today [June 1]. They are being rapidly considered and a report will be published this week. It is not true to say this has been delayed due to global events."

Many fear that, without having the answers that the review could offer, more lives will be lost. Mayor of London Sadiq Khan has said: “Holding back this report does nothing except prolong this inequality and could cost more lives.” Marsha de Cordova, the shadow women’s and equalities secretary, said: “It is unacceptable that this review should be delayed without a given date for its publication. BAME communities need answers.”

And Labour Party leader Keir Starmer stated: "BAME communities have been disproportionately affected by COVID-19. We need the findings of this review published and action taken now. Stop the excuses: publish the review.”

More like this
Here’s Where The NHS Nurses’ Strike Currently Stands
By Sophie McEvoy
Gen Z Are Twice As Likely To Identify As Queer, According To New Data
By Sam Ramsden
Pret & Costa’s Coffee Is The Strongest On The High Street, According To Which?
By Sam Ramsden
This Is When Netflix Is Going To Start Charging You For Sharing Passwords
By Darshita Goyal
Get The Very Best Of Bustle/UK
Sign up for Bustle UK's twice-weekly newsletter, featuring the latest must-watch TV, moving personal stories, and expert advice on the hottest viral buys.