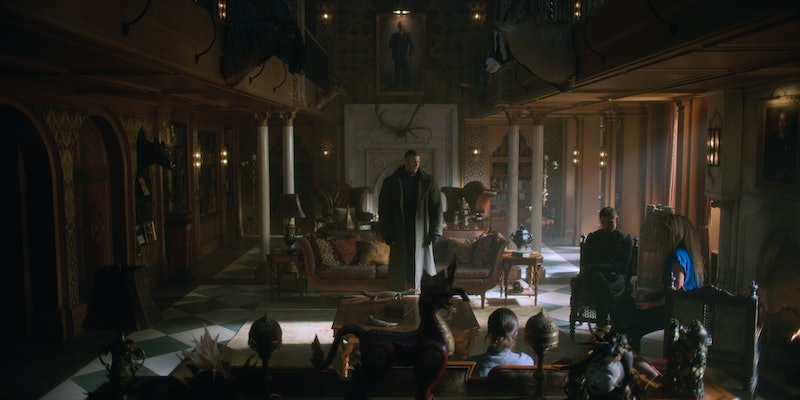 About halfway through the first episode of Netflix's new superhero drama The Umbrella Academy, something strange happens. Up until this point, the series based on My Chemical Romance lead singer Gerard Way's graphic novels has set the stage for the whole season: four former superheroes and their "ordinary" powerless sister reunite for their adoptive father's funeral, each one leaving behind their own uniquely dysfunctional life for this heavy obligation. After a loaded argument, they all retreat to different rooms in the mansion they grew up in to sulk. But then Luther (Tom Hopper), the de facto leader of their wacky psuedo-family of vigilantes, puts on a record in his old room and slowly but surely, each sibling can't stop themselves from bopping along to the beat. Soon enough, the house turns into a full-blown dance party separated by walls set to a killer '80s song. That's when you realize that The Umbrella Academy is not going to be like any other superhero show you've seen before.

In fact, it's less like a superhero show and more like a hodgepodge of the strangest characters and story beats you could think of, complete with surprising dance sequences peppered in throughout the entire first season, which is now streaming on Netflix. "I didn't know I was going to have to dance so much," Hopper tells Bustle with a laugh. "I was so nervous."

"But he knocked it out of the park!" Emmy Raver-Lampman, his co-star who plays his adoptive sister and team member Allison, says. "It's so good."

Every member of The Umbrella Academy's former superhero group absolutely goes for it while dancing their hearts out to Tiffany's cover of "I Think We're Alone Now." And according to the stars, it was all improvised in the moment during filming.

"[Executive producer] Steve [Blackman] just told us it was a scene that was going to turn into a dollhouse," Raver-Lampman says of the way the camera pulls back to reveal everyone dancing at the same time as teased in the trailer for the series. "That was about it. We were just getting into the bones of each character. They just played the music, it was on for 20 minutes and they just rolled the camera and let us do what we wanted."

"I'm pleased it worked out but like, oh wow, that's a whole new thing for me," Hopper says with a self-deprecating laugh. "That was the one that really hit me like, whoa, what are we doing?!"

Both Hopper and Raver-Lampman laugh at how their co-star Robert Sheehan, who plays the sardonic addict Klaus who can see and speak to dead people, had "the worst time" filming that scene. "It was his first day on set, it was the first thing he did on set and on the show, his dance number," Hopper adds while laughing.

"He hadn't even talked as Klaus yet and he had to do this dance with an urn!" Raver-Lampman continues. "We had all had like a day or two on set to get into it a little bit but not him."

Sitting next to his co-star Ellen Page, who plays the "ordinary" sibling Vanya, who is the only one who doesn't have superpowers, Sheehan thinks back to jumping into this role with two feet. "I was trying to make it like a waltz with my dad, like a weird death waltz with dad's urn," he says. "We had to make it all up on the day."

David Castañeda, who plays aggressive and violent sibling Diego who has the supernatural ability to throw knives and never miss his mark, thinks he was the most nervous to film that dance scene. "I was the last one to film after all you guys," he says, sitting on the floor next to the couch Hopper and Raver-Lampman are sitting on. "Everyone was like, 'Oh my god, Emmy and Tom and Robert, everyone was so great!' And I'm just like, 'F*ck. I'm going to f*ck this up.'"

Each character moves in a way that is so perfectly calibrated for their distinctly different personalities. Even Vanya, who has retreated into herself after a lifetime of emotional abuse via her adoptive father, moves in a way that evokes all her insecurities and damage. "She's so afraid to move and that's why I kept her so stiff and small," Page says of her dancing while laying down on the couch.

As delightful as that first dance scene is, it's hardly the only one that pops up in the first season. Badass time-traveling assassins Hazel (Cameron Britton) and Cha-Cha (Mary J. Blige), so buttoned-up and corporate, also get a chance to let loose later in the season. The reason behind their dance party treads into spoiler territory, but just trust, it's fantastic.

"Imagine my surprise when I got a script that says, 'You and Mary J. Blige get really stoned and dance around a science lab together and light things on fire,'" Britton tells Bustle, sitting next to Blige. "I had no idea that was coming! I was nervous as hell for that scene! But as usual we got through it together."

Blige laughs when asked if any part of their dance scene was choreographed. "Did it look like it was choreographed?" she says with big laugh. "We were doing whatever came to mind. They were just like, 'Go!'"

Britton explains that while these myriad dance scenes may seem random and wild, the dancing and music is a huge part of the show. "I love the action scenes and how cute and upbeat a lot of it is because of the music," he adds. Raver-Lampman agrees, adding that "it's another layer of interest and uniqueness about the show."

"I'm not well-versed in the superhero comic world but there isn't a ton of shows that have that," she says. "Steve knew that I had a theater background and was a dancer so I think he was like, 'What about a dream ballet?' and that just snowballed."

But it's the aforementioned scene in the pilot that's everyone's favorite, including Raver-Lampman's. "It's this moment of lightness that is needed and I think that felt like Steve's pride and joy," she says. "He was so excited about that. The story and the show is so dense at that point, we'd just come home from a funeral, we all don't know how to communicate, there's a lot of history and the air is thick. We don't know how to exist in this house together, but there's this one moment of us coming together."

Hopper adds that the scene is a good representation of the show as a whole. "It's a superhero family drama, but with these wacky moments thrown in there," he says. "And that song is now forever imprinted in my brain. I'll never forget it." And after watching the first episode, you won't be able to, either.