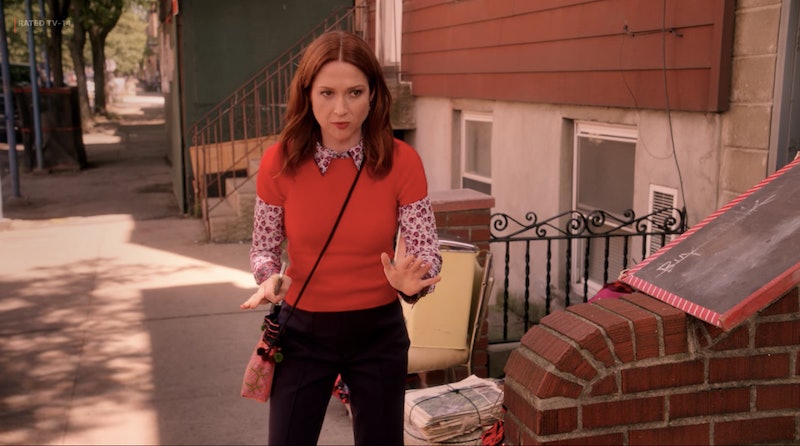 Never before has show about being alone in a bunker felt more relevant. On May 12, the Unbreakable Kimmy Schmidt movie premieres on Netflix, and the interactive movie, titled Kimmy vs. The Reverend, will include new evil plan from its notorious doomsday cult leader. Unbreakable Kimmy Schmidt ended after four seasons in January of 2017, but the core cast will reunite for one final adventure, attempting to unearth yet another bunker and foil the imprisoned reverend's latest scheme.

Much like Netflix's Black Mirror Bandersnatch, the Kimmy Schmidt special will be interactive, allowing viewers to make choices for the characters and follow the story down different paths. A press release teased that the movie special would be the protagonist's "biggest adventure yet" and will include "Three states! Explosions! A dancing hamburger!" — hopefully not all at once. Determined to both end the reverend's tyranny and make it to her nuptials, Kimmy is putting her fate in the hands of viewers. The press release added: "Will you foil the Reverend’s evil plan and get Kimmy to her wedding on time? Or will you accidentally start a war against the robots?"

Familiar faces are returning for the special, including stars Ellie Kemper, Jon Hamm, Tituss Burgess, Jane Krakowski, and Carol Kane. Many new actors are joining for the interactive episode as well, including Daniel Radcliffe, who will play Kimmy's fiancé, as well as Amy Sedaris, Fred Armisen, Chris Parnell, Jack McBrayer, and Sara Chase.

The final season of Unbreakable Kimmy Schmidt ended with its title character overcoming her past and becoming a successful children's book author. In Jan. of 2019, co-creator Tina Fey discussed Kimmy Schmidt's happy ending, during an interview with The Hollywood Reporter. Fey said that the producers thought becoming an author would "be an interesting place for Kimmy's unique experience" as someone who's "been through something so dark but also has a sense of childlike wonder and a desire to make the world a better place."

Based on the new trailer, it looks like the movie will have Kimmy revisit some of the scarier elements of her past, but it will also give the character an opportunity to move on in her personal life as well. So expect a lot of darkness, and a lot of silliness too.