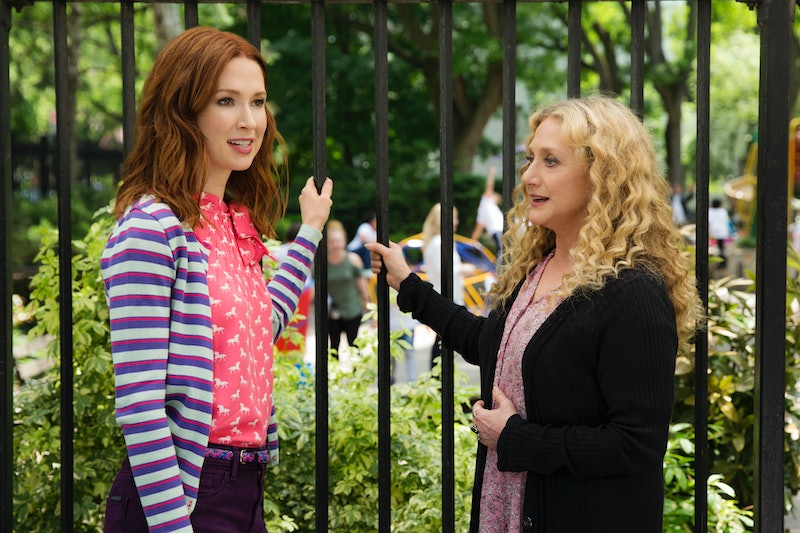 Spoilers ahead for Unbreakable Kimmy Schmidt Season 4, Part 2. For a series centered around wacky characters with wacky schemes, the Unbreakable Kimmy Schmidt ending was, delightfully, just as sincere as Kimmy herself. Yes, there were plenty of hijinks along the way, but she and her makeshift family found a way to change the world — and give fans the closure they were hoping for.

After tying up some loose ends, the final episode flashed forward four years, where everyone is not only still friends, but thriving. Titus and his new agent Jacqueline are in business together, and he's finally the star he was born to be. Lillian lost her tugboat apartment, but she found success as the new voice of the NYC subway (hopefully the MTA is also fixed in this future).

And while Kimmy is still coping with Post-Traumatic Stress Disorder, her children's book took off, and she was able to rally against the patriarchy in her own way. She rebranded as K.C. Schmidt, and her series The Legends of Greemulax became so popular that a Harry Potter-like theme park opened in Orlando — where she was able to bond again with her roller coaster-obsessed mother, Lori-Anne (Lisa Kudrow). To top it all off, she's finally fulfilling her dream of going to London in order to open a second park.

In the series' final moments, a young boy tells Kimmy that her books make him feel safe. It's incredibly sweet, and it fits well with Kimmy's enduring optimism: she's able to dilute toxic masculinity, even marginally, with the same kindness and positivity she's always believed in.

Meanwhile, Titus finally got to star in The Lion King as Rafiki. It was his dream in the pilot, so this really came full circle (of life). He and Mikey got back together in the final episode, too, and four years later are married with two children. In the flash-forward, Titus is starring in Sliding Doors 2: Tokyo Doors, a callback to an earlier Season 4, Part 2 episode that envisioned how Kimmy and Titus' lives would be different if they'd chosen to see Sliding Doors, a Gwyneth Paltrow movie about how her life would be different if her character had made different choices, when it came out.

As for Jacqueline, not only is she a successful agent, but she also forged a respectful, caring relationship with her once rival agent, Eli (Zachary Quinto). She finally has her own career, her own identity, and also a loving partner.

Everyone's happy, basically! But is that really all for Unbreakable Kimmy Schmidt? The title card reads "End" at the end, followed by the theme song's "Dammit!" but there have been rumblings of a potential movie.

"Netflix told us to to say we'll keep you posted," executive producer Robert Carlock said in a recent interview with The AV Club. "That's the sanctioned answer." So, one day there could be a movie, a reboot, a spinoff, or something of that sort, but if there's not, you can take comfort in the fact that Unbreakable Kimmy Schmidt gave Kimmy, and fans, the ending they deserved.