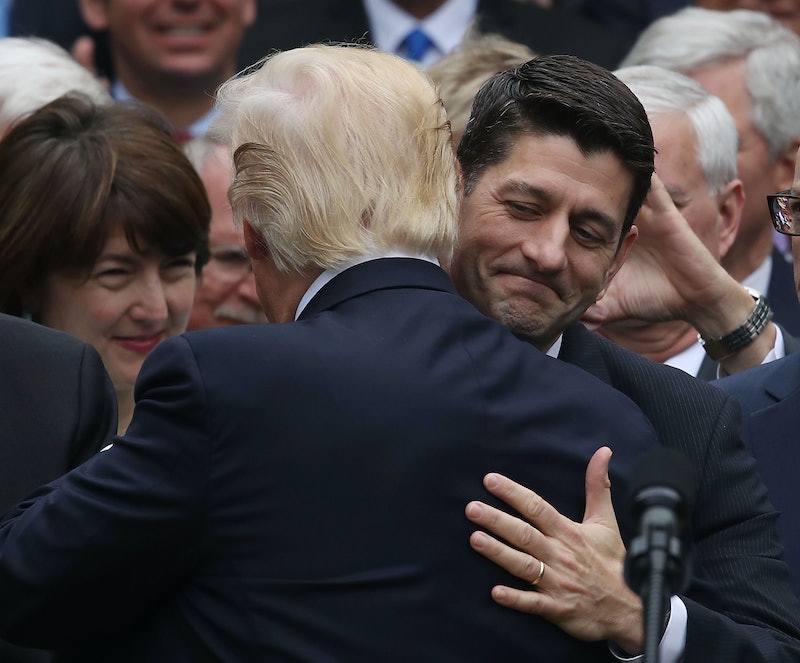 There are winners and losers in history, but oftentimes that calculation doesn't just come down to who got the votes or won the battles. When it comes to a lawless, chaotic government that seems determined to run itself into the ground, the people propping it up aren't going to look good in the end — even if they did win an election. History won't reflect fondly on Donald Trump's GOP enablers, no matter how often they can claim that he hasn't broken any laws. They're standing by or actively supporting him as he runs roughshod over the nation's dignity, and this won't be forgotten in the future.

When you take the regimes of the 20th century into account, the Trump administration certainly hasn't committed atrocities on the same scale. He's only threatened to make human rights violations, he hasn't attempted to commit genocide (although he has guaranteed hundreds of deaths through the Global Gag Rule), and the U.S. is still very much a two-party state, with a system of checks and balances in place.

However, he's treating the laws of the country as though they're his to bend and break as he wishes. He dismissed appeals to release his tax returns. He ignored calls to step away from his businesses, and now it's undeniable that he and his family are personally profiting from his presidency. He continues to ignore the separation of powers in the country. He can't stop lying. He threatens journalists and is prone to embarrassing outbursts on Twitter. He expresses more support for dictators than for long-term, proven allies.

And at each step, Trump's supported by a chorus of Republicans in Washington. They ignore missteps that would have gotten Barack Obama impeached and that would have put Hillary Clinton through hours of hearings. They watch as he spars with one of the U.S.' most powerful allies, German Chancellor Angela Merkel and embraces the authoritarian Turkish leader Recep Tayyip Erdogan. Few raise their voices when he shares sensitive intelligence information with Russia, just because he wanted to brag about the quality of his intel.

Sure, they've gotten their conservative Supreme Court Justice, the promotion of climate change denial, and the limiting of women's reproductive rights left and right. But unfortunately for them, this is about more than just short-term gains.

Their political legacies will surely be tainted once the historical reckoning comes around, and it turns out that Trump was an monumentally terrible president. Some will surely lose their elected positions because of their enabling. In the Democrats' dream scenario, the 2018 midterms will flip one or both houses of Congress, and then Mitch McConnell will surely be sorry about all of those changes he made to make it easier for the GOP to force laws through.

It's really about more than all that, though. When you look at 20th century history, the dictators themselves come out looking pretty bad. But just as bad are the people who propped them up for political gain and dedicated their lives to the same causes — then tried to distance themselves later on, once it wasn't politically expedient anymore. The U.S. is still a democracy, and the voters will remember who attached themselves to Trump to get those short-term political gains, and who stood up against him for the sake of the nation.