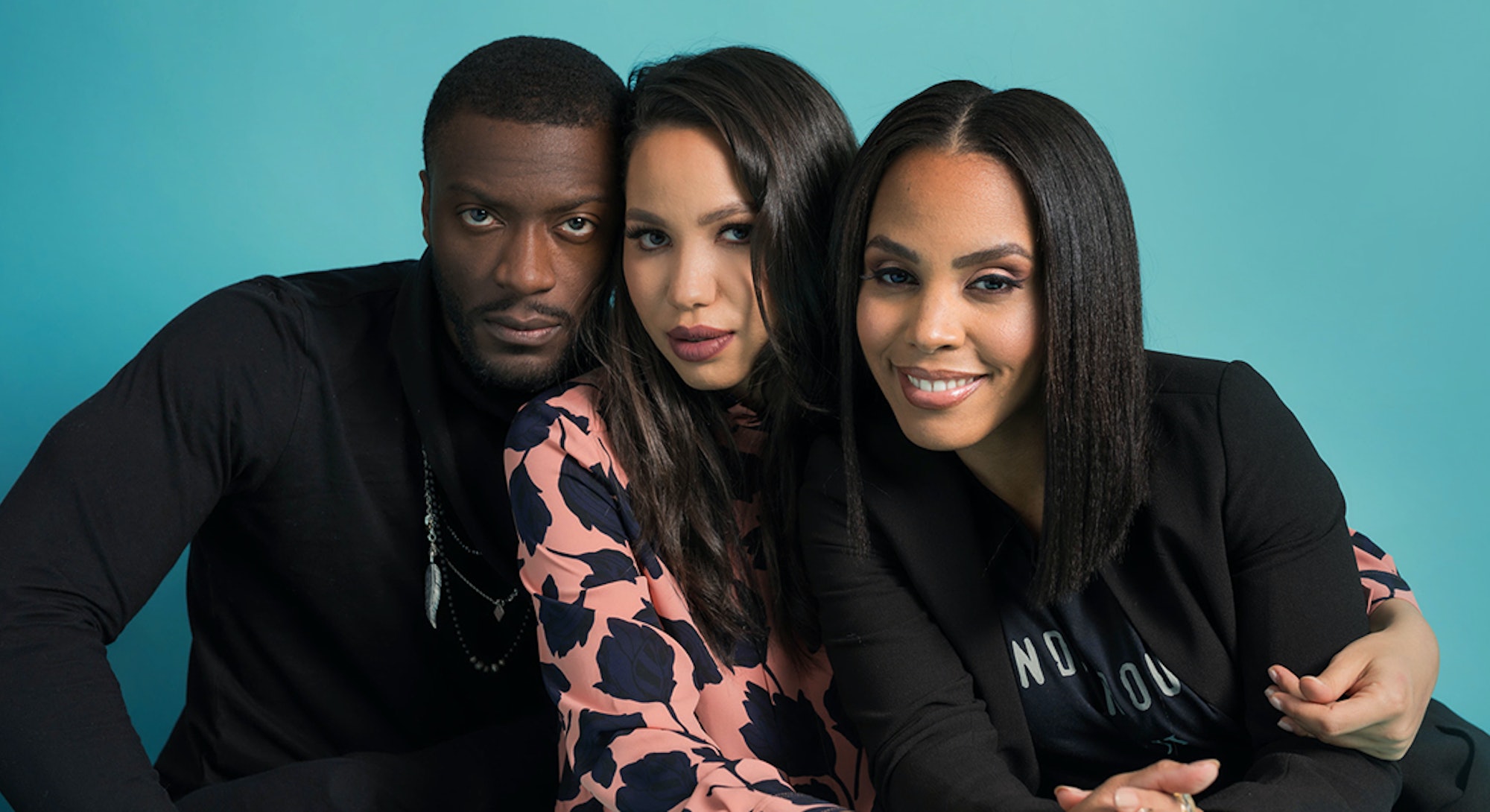 A woman's hands being lashed until they bleed to save her young brother from the same fate. A man preparing to have his feet cut so badly, he will never walk the same way again. A mother throwing herself in front of a group of armed men prepared to shoot, just to give her daughter a chance to get away. Scenes like these can make WGN America's Underground hard to watch, but that's exactly why you should be paying attention. The historical drama about the Underground Railroad is just two episodes into its second season, airing on Wednesday nights at 10 p.m., and it has already shown a barrage of unsettling scenes. But if the first season focused on the sacrifices people make for freedom and those they love, as the Underground cast tells Bustle, Season 2 is all about choosing to stand up for what is right.

"I think what’s beautiful is ... [the showrunners] are exploring this theme of citizen vs. soldier," star Jurnee Smollett-Bell says. "How, really, the abolitionists, most times, could have stayed in the comfort of their homes and stayed in their safe zones. They didn’t have to get out and fight, but their conscience, their morals, their souls, would not let them just sit idly by while this atrocity was happening."

Indeed, Season 2 made the risks all too clear in the season premiere, when abolitionist and lawyer John Hawkes was shockingly killed by an unknown shooter. But his wife, Elizabeth, is hardly the one who will suffer this season. Now working alongside Harriet Tubman, Smollett-Bell's Rosalee will face incredible hardships while on missions to free slaves, hopefully including the family she had to leave behind. Aldis Hodge's Noah is currently being held captive after Hawkes' plan to help him escape prison failed, and is facing the possibility of being returned to slavery. And Amirah Vann's Ernestine, now a field slave at another plantation, must cope with abuse and her own demons.

Showing all of these struggles, and many, many more, is part of how Underground avoids falling into the "white savior" trope, which so many portrayals of slavery and other forms of oppression unfortunately have.

They’re not waiting for anybody, leaning on anybody, and hoping for this. They’re saying, 'nope, we've got to do it ourselves,' and they do.

"That’s the beautiful thing about being on this project: telling a story or a side to the story that people have yet to see," Hodge says. "It also gives us a different sort of idea of who these people are and how [the Underground Railroad] came to be, because there is strength in that, they’re not waiting for anybody, leaning on anybody, and hoping for this. They’re saying, 'nope, we've got to do it ourselves,' and they do."

That's where being a soldier comes in. Though Underground hasn't reached the Civil War yet, you cannot doubt that all of these characters are soldiers — and have been from the moment we met them in the pilot — and they each show it in different ways. Noah is the most obvious, and Hodge says that his "fighting spirit" from Season 1 has not faded.

"It will never die, you can’t beat that out of him," he says. "He’s always going to maintain that backbone and that spirit of having to fight until his last breath, because I think that’s really all he knows at this point."

For Ernestine, it comes out in the way she protects her family — even if that means hurting other people or herself.

"My sacrifices that I made, they were all for just trying to keep [Rosalee] safe," Vann says about her character, who eventually, realized that "the best safety was just to allow her to fight for her freedom" And while the actor first says that in Season 2, Ernestine is excited to see Rosalee again, she also thinks the opposite is true.

But as viewers know, Rosalee has every intention of seeing Ernestine again and is planning to help her mother and younger brother, James, escape slavery. Along the way, she has become a soldier for the Underground Railroad, risking her own life to save others — a choice she actively made at the end of Season 1. Instead of sitting back and enjoying her newfound freedom, she decided to join the fight on behalf of those still enslaved. "I can’t look away no more," she said in the finale. "If I stay here and try to start a new life, that’s all I’ll be doing."

That choice is what ties Season 2 to the present day so tightly. When asked what viewers can learn from Underground to use today, Hodge simply says, "The star thing of this season for certain, which is citizen v. soldier," and the rest of the cast agrees.

"We’re all not free until we are all free," Smollett-Bell says. "I’m not free until everyone is free and it’s important for me to step outside of my comfort zone to pick up the fight for my brother and my sister, even though the battle may not affect me."

Yes, the fight for freedom directly affects Rosalee and Noah, but it doesn't affect Elizabeth, or her new "sewing circle" of female abolitionists, or the many free Americans who aide the Underground Railroad. And some of the present-day freedoms in jeopardy under the Trump administration — like a woman's right to choose, LGBTQ rights, immigrant rights, and so many other civil liberties — may not affect you directly, but that doesn't mean you shouldn't join the fight.

"Are you going to sit in your home and watch other people be oppressed? Are you going to be silent about that? Or are you going to pick up the battle? ... Are you a soldier? Or are you a citizen?," Smollett-Bell asks. "I think that’s one thing that’s so greatly explored in Season 2 ... the people who could live a very comfortable and safe life — that’s what we have to remember, it’s safe — they’re risking their lives, but why? Because it’s the right thing to do. That’s just what it is."

Being a soldier doesn't always mean putting your life in direct ranger — especially in the political battles in 2017. And Vann hopes that Underground helps viewers realize that.

"There are so many ways to be a soldier, she says. "Just in how you speak to your children, what you tell them about how to deal with people who are different than they are, that’s being a soldier."