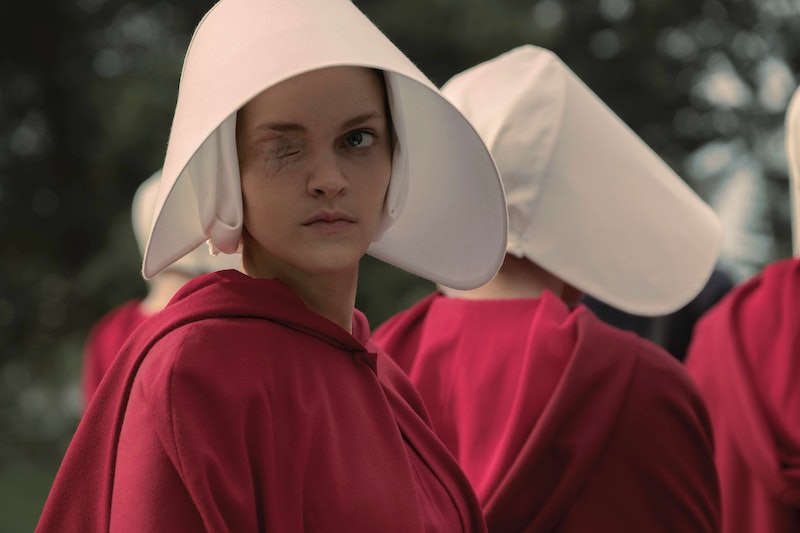 It's a series that was destined to cause a stir. The Handmaid's Tale novel imagines a society that's either an alternate universe or a very near future — depending on where you fall on optimism-pessimism scale — in which fertile women are rounded up and forced to be reproductive slaves for wealthy couples. The Hulu series that adapts the novel does not exist within a vacuum, nor, unfortunately, will be it judged primarily on its own merit. As evidenced by the recent discourse about Patty Jenkins' Wonder Woman film, more is asked of media that's created by women, concerns gender, or prioritizes a female experience.

The expectations put on the show and its cast, as well as the way that those expectations impede productive discussions about the issues raised by The Handmaid's Tale, were apparent in the backlash to comments made at the show's Tribeca Film Festival screening. Madeline Brewer plays Janine on The Handmaid's Tale, and was quoted by Vanity Fair and other outlets as saying about the series, "I don’t think that this is any sort of feminist propaganda." Co-star Elisabeth Moss followed up on that thought by calling the show a "human story" rather than "a feminist story." And some feminist viewers felt betrayed by the distancing. In an interview at Bustle HQ, Brewer is happy to answer the question, but can't help but briefly roll her eyes skyward when the fateful panel comes up.

"In talking about feminism a lot," the actor says, "I feel like I almost go on autopilot and defend it before it’s been attacked. And that’s not a good way to be, and that’s what I was doing at that Q&A at Tribeca. As soon as [the moderator] said 'feminist,' I was like, 'I must defend it!'"

Brewers calls herself an "outspoken feminist" who was raised by "a badass feminist." In fact, the actor giddily takes the desk chair in the office where we meet, because it reminds her of visiting her mother at work when Brewer was a kid. But feminism looks different from here, in the cold light of Twitter eggs and "Red Pill" Reddit groups. To claim a feminist identity is to enter an ideological war zone with a lightning-fast response rate, and Brewer admits that a response anticipating misogynistic criticism didn't accurately make her point.

"I’m one of those terrible people who reads YouTube comments," Brewer explains. "And somebody was like, 'This is filth. This is feminist propaganda.' And I was like, 'No, it’s not!' I wanted to scream at the top of my lungs that that’s not what we’re doing here, and that’s not what this story is about."

And that's the problem. Any boxer will tell you that when you're fighting on your back foot, you're already in trouble. The Handmaid's Tale (and Wonder Woman, and Orange Is The New Black, and so on and so on...) and the people who make it are asked to represent all of feminism, for both believers and a group Brewer calls "haters." To have to now, in 2017, consistently be called upon to prove that feminism is a valid and essential movement limits their ability to have specific, productive conversations that move the needle even more — and address the intersectionality issues that Brewer makes sure to point out.

And there's so much specifically to talk about in The Handmaid's Tale once, yes, we all agree that it very much is a feminist work. Firstly, there's the sheer breadth of womanhood represented, with each Handmaid responding to this oppressive regime in her own way. Brewer's character Janine chooses to dissociate.

"I think that she really doesn’t like it when people call her crazy — as any person wouldn’t," Brewer says. "That’s just not fair. She has been dealt these circumstances that are just physically, emotionally, mentally, and psychologically too difficult to bear." The actor sings a snatch of a song that she listened to when finding Janine: "Smile, though your heart is aching, smile even though it’s breaking... She’s just always kind of smiling, just trying to get through it."

There's also the complex portrayal of sexual assault and rape in the show. In Brewer's opinion, it's victim shaming about her own that "breaks" Janine, not her violent disfigurement. "Cause even after you take her eyeball out, she’s still Janine. She’s still, 'f*ckin’ whatever,'" the actor says. "There’s a real kind of change in her [after the shaming], where she’s like, 'I can’t do this. I can’t stay here, mentally.'"

Brewer did research and spoke to friends who are survivors to understand how their own experiences differ from "how [rape is] portrayed for entertainment purposes."

"We have more of an opportunity to flesh out those feelings and those wounds for her," she said. "Just as you do in real life. You go on. You don’t forget, but you keep living. You continue."

Resiliency looks different to different people, and Janine uses her own mechanisms to cope with what's happening to her. While they may not look as brave to some viewers, they might be all that's available to her. Brewer cites Janine's confession to Charlotte, the baby she births for her masters, as her most poignant and rebellious choice.

"It’s not out there fighting in the streets, but it’s her act of, 'we still have this and they’re going to tell us that we don’t, but we do,'" she says. "And then after that point, she has Charlotte to stay alive for."

This all sounds like extremely heavy work, but the actor, who's also appeared on Orange Is The New Black and Black Mirror, wouldn't have it any other way.

"There was a time in my career so far, when I wasn’t working a lot, but I was getting sent out on auditions for a lot of [auditions] where the character breakdown, the first couple of words that would describe her was a physical thing or a hair color or "feisty,'" recalls Brewer. "Like, what is that? I loved the ones that would say, 'She’s lithe.' Oh, lithe. Or 'athletic, but sexy.' As if those things were mutually exclusive." It was a turning point for the actor.

It's safe to say that Janine is not a catalyst for anyone but herself. Fortunately, her character's tragic courageousness didn't weigh too heavily on the decidedly buoyant Brewer.

"I took off the eye, I felt like me again," Brewer says. "That doesn't mean that I didn’t feel the pressures of our society right now while we were doing it. I’m playing Janine, and Janine is eight months pregnant, and I’m like, 'Thank god for my IUD.'"