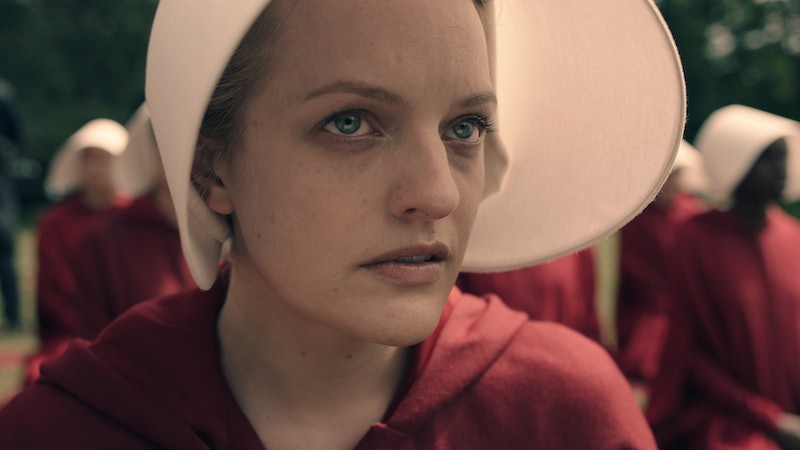 Elisabeth Moss would like to change her answer to the question about whether or not The Handmaid's Tale is a feminist show. “I wanted to say ― and I’ll just say it right here, right now ― OBVIOUSLY, all caps, it is a feminist work," Moss told The Huffington Post. "It is a feminist show.” Moss' emphatic declaration appears to be her attempt at correcting her previous response days earlier at the Tribeca Film Festival. Initially, she said that The Handmaid's Tale was "not a feminist story, it's a human story because women's rights are human rights."

That original answer didn't go over well with fans who believe the Hulu series based on Margaret Atwood's 1985 dystopian novel of the same name — which looks at a future where women have no control over their own bodies — is most certainly feminist. Apparently, Moss agrees and wishes she would have made that clear the first time. “I’m not sure that that was exactly what I was trying to say," Moss told HuffPost.

The actor, who plays Offred on the series, is not the first to wish she could take something she said back, but the fact that she and her castmates were so dismissive of the word "feminist," replacing it with the word "human," feels more like a marketing decision; in other words, an attempt to get all viewers on board. But it's a bad one at that, since The Handmaid's Tale shouldn't be afraid to lean into its feminist label when it focuses on such strong women.

Sure, the word feminist unfortunately still comes with stigma. There's concern that those who don't identify with the word, which at its core is about equality between the sexes, will be turned off. Last year, Emma Watson claimed she was asked not to say "feminist" in her HeForShe speech at the United Nations, because it may be "alienating." She, of course, used the word anyway. But the idea that the word is alienating is why some women have started calling themselves "humanists" instead of "feminists," despite the definition of the two phrases being practically the same. The need for equality — nothing more, nothing less.

It's why the idea that The Handmaid's Tale is not feminist show doesn't do justice to what the story is all about. Atwood's novel is told from the female perspective, showing what it's like to be stripped of your rights and treated like a piece of property. The women in Atwood's book are split into groups based on their ability to conceive; handmaids being the women in red, who are still able to have babies at a time when the birth rate has dropped due to a mysterious illness.

For many, the themes of The Handmaid's Tale feel surprisingly current with the apparent attack on women's reproductive rights today. It's why sales of Atwood's book have gone up since the election. It's why it's so surprising that after all this time, we're still having trouble calling this story what it is: feminist, whether you like it or not.

The truth is, The Handmaid's Tale can be both a feminist tale and a human one. Women, are in fact, human and these stories of being discriminated against are universal. Just because this particular story is told from a women's point of view doesn't mean you have to be a woman to understand it. It's why the cast of the show should've referred back to Atwood's answer of whether The Handmaid's Tale is a feminist novel in a New York Times op-ed she wrote last month. She said,

If you mean an ideological tract in which all women are angels and/or so victimized they are incapable of moral choice, no. If you mean a novel in which women are human beings — with all the variety of character and behavior that implies — and are also interesting and important, and what happens to them is crucial to the theme, structure and plot of the book, then yes. In that sense, many books are 'feminist.'

The word itself shouldn't stop anyone from paying attention to the important story being told. The Handmaid's Tale is a cautionary one of what happens when we allow government to take away our rights. In a world like that, it is not just women who are affected, but anyone who doesn't agree with the regime in power. It's why Moss believes the problem with her previous statement was the word she left out. “I think what happened was that I left out a very, very important four-letter word, which is ‘also,’” Moss told Huffington Post. “It’s also a humanist tale. That’s all."

The Handmaid's Tale isn't an either/or kind of story, but an all-inclusive one. It just so happens to be a feminist one, too.

More like this
Everything To Know About The 'Daisy Jones & The Six' TV Series
By Maxine Harrison and Brad Witter
Netflix Shut Down 'Bridgerton' S3 Rumours About A “Very Dark” Storyline
By Bustle
Linda Ronstadt’s “Long Long Time” Plays A Pivotal Role In The Last Of Us
By Brad Witter
Andy Cohen Apologized To Larsa Pippen After A 'RHOM' Season 5 Reunion Dust-Up
By Brad Witter
Get Even More From Bustle — Sign Up For The Newsletter
From hair trends to relationship advice, our daily newsletter has everything you need to sound like a person who’s on TikTok, even if you aren’t.