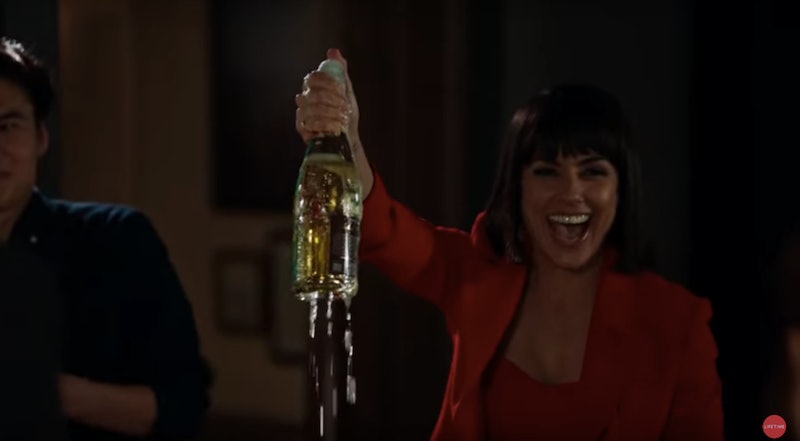 The days of nudity, 9-1-1 calls, and catfights seem like sunshine and rainbows compared to what's in store on Everlasting. And now that the (fake) hit reality TV show is on the brink of cancellation, its producers are going rogue like never before to save it (turns out, it's possible to out-crazy themselves). The new UnReal Season 3 trailer was released on Tuesday, and it's filled with champagne popping, panty dropping, and more jaw-dropping hints that promise the most wildly insane season yet.

The trailer opens with Rachel (Shiri Appleby) off the grid, dealing with the guilt of her many, many horrific actions in the previous two seasons. But because the show within this show is so wild, Rachel finds that despite her guilty conscious, she has bigger fish to fry. Quinn (Constance Zimmer) convinces Rachel to be alongside her at the helm to save ratings and control Everlasting's rebellious new star, who's also UnReal's first take on a bachelorette.

The two-minute trailer shows brief snippets of a crime scenes, punches being thrown, clubbing, cocaine, more punches being thrown, a sketchy finger prick for blood (what?!), tears, and partying. And as fun as Quinn's lines like, "Let's get this sausage party started" and "And... panty drop" are, there's a lot to unpack here.

First of all, who are Rachel and Quinn having sex with? Very hot, buff, young mystery men, that's who. Quinn is briefly shown going at it with the man bun contestant (which had to have happened before his man bun was cut off in his sleep, as the previous Season 3 trailer explained). Naughty, naughty, Quinn.

And she's not the only one. Rachel also has her fun with another guy, and it's unclear whether or not it's Adam (Freddie Stroma). If it's not him, it's someone who sure does look exactly like him. (These good-looking dudes can get confusing after a while.) So will Rachel get over Adam by being on someone else? That remains to be seen.

And of course, there's the new heroine, who, unlike many of the other contestants, isn't here for Rachel and Quinn's mind games. At least not at first. Everlasting's new leading lady Serena (Caitlin FitzGerald) is a hot, smart, Silicon Valley mogul party girl who's determined to call the shots on the show.

"From this moment forward, the only rules are the rules that I make," she demands. "I don't trust you as far as I can punt you," Serena later tells Quinn. A determined Quinn privately tells Rachel, "She's smart, we can't handle her the same way." How will the master manipulators undermine Serena's confidence? It seems it's only a matter of time until the masterminds get to her, and that will be all the more fun to watch.

It's clear Rachel and Quinn are outdoing their usual no holds barred approach (which is already pretty damn crazy, considering the multiple deaths and whatnot), but there's more savagery up their sleeves to be explored. Still, Zimmer has hinted that amidst the chaos, Season 3 will explore uncharted territory.

"It’s all these hot men, and now, not only do you have two strong women, but you have three," the actor told The Hollywood Reporter. "And it is a crazy trifecta of women wanting to help other women, but not knowing the best path." Zimmer also hinted that Season 3 will include "incredible conversations [about] feminism and objectifying men," while continuing to raise hell at the same time.

UnReal's third season is about to blow minds in more ways than one, because 2018 is already promising more amazing freaking television. (And fake television.)