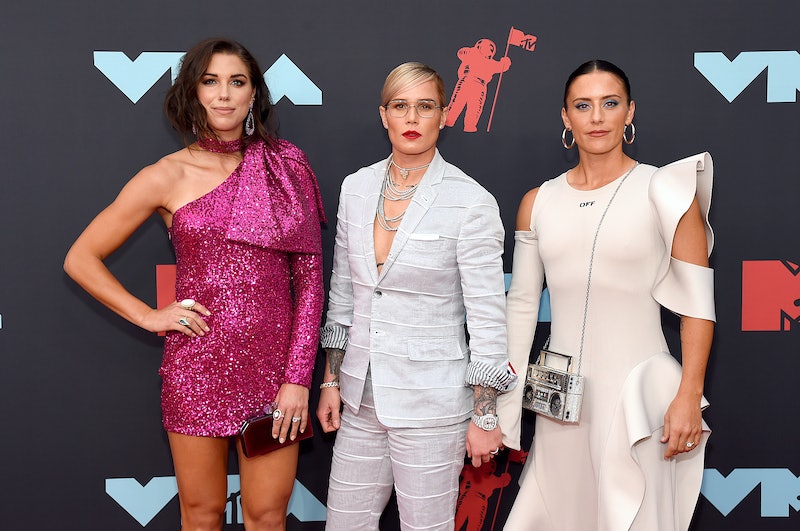 The U.S. women's soccer team graced the VMAs stage on Monday, Aug. 26 in epic fashion. Ashlyn Harris, Ali Krieger, and Alex Morgan recreated their tea move at the 2019 VMAs at the Prudential Center in Newark, N.J. The USWNT trio presented the Best Collaboration VMA, and they treated the audience to their famous celebration move before they handed over the Moon Person to the eventual winners, Shawn Mendes and Camila Cabello for their song, "Señorita."

During their cameo, Morgan stated the importance of collaboration. "Being part of a team demands collaboration," she said. "It's not just about playing the game. I mean, how you think we won four World Cups?” Then, 2019 World Cup winners Harris, Morgan, and Krieger did their famous tea-sipping goal-celebration move, which earned the crowd's applause.

Yes, that's the same tea-sipping move that Morgan did during the the USWNT's semifinal match against England during the FIFA Women’s World Cup — which she later had to defend. “I feel there is some double-standard for females in sports to feel like we have to be humble in our successes and have to celebrate, but not too much or in a limited fashion,” Morgan told reporters in July, according to ESPN. "You see men celebrating all over the world in big tournaments, grabbing their sacks or whatever it is. And when I look at sipping a cup of tea, I am a little taken aback by the criticism."

As reported by ESPN, Morgan's now-famous tea-sipping was partly inspired by Game of Thrones actor Sophie Turner, who is known not just for her role as Sansa Stark, but for her Instagram Story catchphrase, "And that's the tea." Back in July, Turner supported Morgan and the USWNT's right to use the move, even as she was rooting for England, her home country.

"Unfortunately the U.K. women’s football team lost at the World Cup. And of course I’m incredibly sad and incredibly proud of that team, but I am so honored that we lost to such and incredible team, the U.S. women’s football team," Turner said in a July IG Story. "Alex Morgan, all the haters saying that this is disrespectful, I’m honored that you thought of me," she said, adding, "I'm really f*cking proud of you, Alex Morgan. Congratulations on your win. And that's the motherf*cking tea."

Turner was in attendance at the VMAs with her husband, Joe Jonas, but unfortunately, MTV did not show the actor's reaction to the tea-sipping. But after the show, Turner tweeted a photo of her tea-sipping with Morgan as one of her favorite moments at the show.

Elsewhere on Twitter, viewers definitely loved it and voiced it on social media. Fans had a lot of pride for the USWNT players making their VMA cameo in such a cool way.

Lots of viewers were so excited to see the sipping live on at the VMAs.

A few Twitter users called for a future collab between Morgan and Turner.

Now that both icons have met, anything is possible. As Turner and Morgan would say, and that's the tea.

More like this
Taylor Lautner Thought Taylor Swift's 2009 VMAs Interruption Was A "Skit"
By Alyssa Lapid
9 Photos Of Celebrity Couples & Unexpected Duos At The 2023 Grammys
By Jake Viswanath
What Is Mary J. Blige’s Net Worth? The 9-Time Grammy Winner Is Doing “Just Fine”
By Hugh McIntyre
Adele Is Attending The 2023 Grammys, Thank You Very Much
By Jake Viswanath
Get Even More From Bustle — Sign Up For The Newsletter
From hair trends to relationship advice, our daily newsletter has everything you need to sound like a person who’s on TikTok, even if you aren’t.