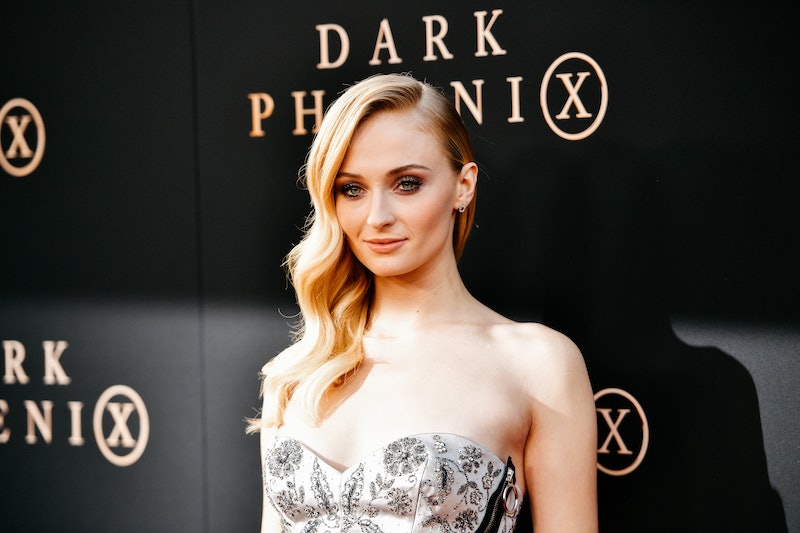 The new Mrs. Jonas might be busy resting and relaxing on her honeymoon, but there's always time to share the tea. On Friday, July 5, Sophie Turner interrupted her honeymoon to share a video supporting Alex Morgan and discussing the World Cup, after the US Women's National Team received backlash for their goal celebrations during their match against England.

After scoring a goal during the semi-final match against England on July 2, Morgan celebrated with a tea-sipping gesture on the field, which some felt was a reference to the Boston Tea Party or a dig at the opposing team. According to the Associated Press, the soccer star addressed the backlash she received for the celebration on Friday, explaining that it was simply a reference to Turner's Instagram Stories, where she often shares "the motherf*cking tea" with her followers.

In response, the Game of Thrones star posted a new Instagram Story from her romantic getaway with new husband Joe Jonas, noting that while she hasn't been following much of the discussion online, she couldn't help but weigh in on Morgan's celebration. "Unfortunately the UK women’s football team lost at the World Cup. And of course I’m incredibly sad and incredibly proud of that team, but I am so honored that we lost to such and incredible team, the U.S. women’s football team," Turner said, before addressing the athlete specifically.

"Alex Morgan, all the haters saying that this is disrespectful, I’m honored that you thought of me," she said, adding, "I'm really f*cking proud of you, Alex Morgan. Congratulations on your win. And that's the motherf*cking tea." Turner punctuated her comments by taking a large sip of her glass of wine, which fans and followers will note is the actor's preferred way of wrapping up her tea spills.

In addition to clarifying what the inspiration was behind her gesture, Morgan also addressed the criticism that the US Women's Nation Team has received for their goal celebrations during this tournament, stating that male soccer players wouldn't be subject to such intense backlash. "I feel that there is some sort of double standard for females in sports to feel like we have to be humble in our successes and have to celebrate but not too much, or do something but always in a limited fashion," Morgan told reporters on Friday.

Her teammate, Carli Lloyd — who used a golf clap to celebrate a goal against Chile on June 17 as a literal clap back to celebration critics — also told reporters that the team's gestures aren't meant as digs or disses to their opponents. "Everybody’s just kind of having fun with the celebrations and embracing the moment," she explained. Considering everything that the USWNT has sacrificed and overcome to get to the World Cup, it seems only fair that these amazing athletes get to enjoy the moment without having their actions over analyzed.

Of course, Morgan is far from the only person who has become deeply enamored of Turner and her social media antics. In late April, the actor reacted to her best friend, Maisie Williams' major Game of Thrones moment by sharing a video cheering over Arya killing the Night King at the end of the Battle of Winterfell. "Arya really is that b*tch!" Turner shouted into her camera, tagging her BFF in the giddy Instagram Story. "Yes you are, b*tch!"

A month earlier, Turner stole the show at a New York Rangers game after she was captured dabbing and chugging wine on the jumbotron at Madison Square Garden. "Send it for the Starks," she captioned the video on Instagram, officially cementing her status as the coolest person in Hollywood. And there was also the time that Turner shared a video of the audience at a Jonas Brothers concert cheering "Lady Stark" when she stopped by the stage in April.

Considering how many fans she's earned thanks to her goofy, profanity-laded and delightful social media videos, it's no surprise that even Alex Morgan would want to pay homage to the Queen in the North whenever she has the chance. Now, instead of criticizing the USWNT for their celebrations, let's all simply admire their athleticism and good taste — and that, as Turner would say, is the tea.