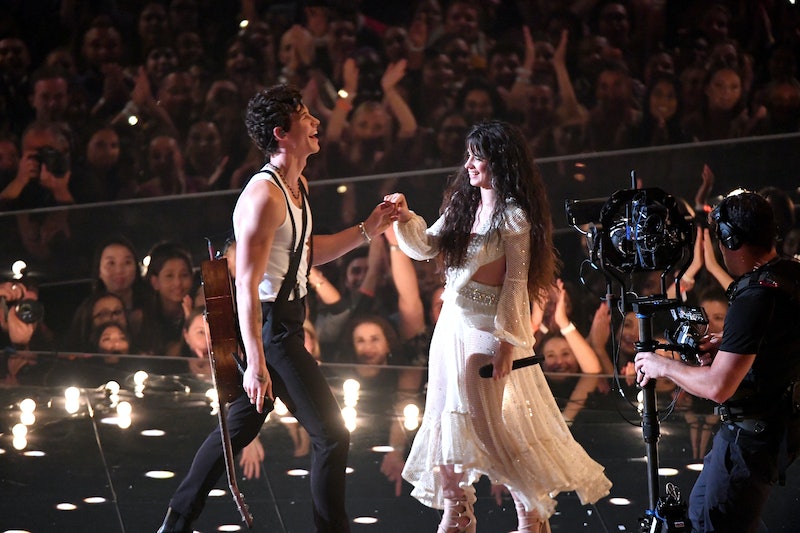 Is it hot in here, or was it just that steamy "Señorita" performance? Camila Cabello and Shawn Mendes' VMAs performance of their latest duet had fans freaking out over the pair's intense chemistry. Cabello, rocking a sheer, sparkly white dress, danced around Mendes, who was performing his second song of the night, after "There's Nothing Holding Me Back."

Of course, just when fans thought things couldn't get hotter, Mendes put down his guitar and the pair showed off some of the steamy choreography from their music video. As the cameras swirled around them, they got closer and closer, teasing fans with the possibility of an onstage kiss. For the record, they didn't kiss, but Cabello did end the performance by rubbing her nose against Mendes', which seemed to have the same effect to fans watching at home.

The VMAs marks the first time that Cabello and Mendes have performed their sultry single onstage since it was released in June. The pair are also nominated for five awards throughout the night, including Best Collaboration, Best Choreography — which they've showed off in multiple behind-the-scenes videos — and Song of the Summer. Mendes is also nominated for Artist of the Year.

"Señorita" is the second song that Mendes and Cabello have worked on together; in 2015, the pair released "I Know What You Did Last Summer," and while they have remained very close since then, it took almost a year for Mendes to convince the "Havana" singer to work on another duet with him. "It took me 10 months to convince Camila to sing this with me," Mendes told V Magazine in a joint interview with Cabello in June.

Cabello told V in the same interview that the issue was that they kept pitching seasonal updates of their first collaboration: "We wanted to do a song called, 'I Know What You Did Last Winter' and 'I Know What We Did Last Fall,'" she said. "[Our managers] were like, 'No,' and we were like, 'What?!' We almost fired them. We were like, 'What do you mean? How’s that not a good idea?'"

While they never ended up releasing those proposed duets, "I Know What You Did Last Summer" did eventually help inspire the nominated music video for "Señorita," Cabello revealed. "We were looking at the video for 'I Know What You Did Last Summer' and we were 30-feet apart," she told V. In response, the pair dreamed up a concept that was "the complete opposite" of that first video, according to Mendes. "We grew up a little bit," he said.

The pair decided to recreate some of the video's sensual choreography on the VMAs stage, which only adds fire to the rumors that Mendes and Cabello are dating. They were first spotted holding hands over Fourth of July weekend in California, and Cabello gushed about Mendes on Instagram while attending his concert at the Staples Center in Los Angeles shortly afterwards. On July 29, Mendes and Cabello were photographed being affectionate and kissing in Miami, though the pair have yet to officially confirm whether or not they are more than friends.

While it doesn't look like the pair will comment on their relationship status at the VMAs tonight, it's clear that Mendes and Cabello's chemistry is hotter than ever.