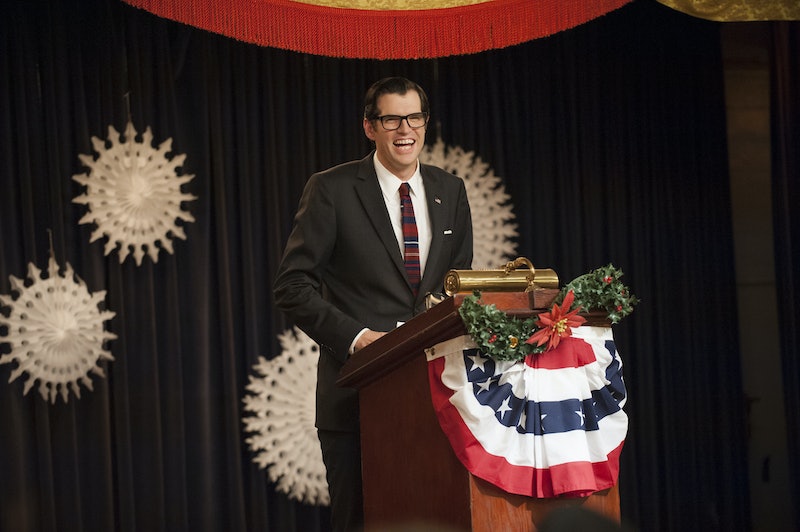 In the second episode of its final season, one of HBO's most biting series once again walked a moral tightrope as it poked fun at some distinctly un-fun material. Veep spoofed the #MeToo movement, but it doesn't feel like it was actually making light of survivors of sexual misconduct. Instead, the always despicable Jonah Ryan was the undeniable target.

In a ridiculous twist of events, it's revealed that women in D.C. have become tired of Jonah bragging all over town that he's supposedly had sexual encounters with them. Led by the hilarious Heidi Gardner, a Saturday Night Live stand-out who should honestly have her own show, these women form the #NotMe movement.

Gardner initially comes forward asking Jonah to sign a non-disclosure agreement that would stop him from claiming they were ever romantically involved — she insists that they went on one professional lunch, and even split the bill. "There's no way I'm gonna sign that," Jonah says. "You are a stone-cold neck-down hottie, and I want the whole world to know we dated." Charming, as always.

When he refuses, she heads to the media. Armed with a lawyer who says women have been "silent in the face of rumors they went out with Congressman Ryan" for too long, she makes a tearful statement.

"Jonah Ryan and I have not ever dated nor gone on a date of any kind. We had one meal together, but it was strictly professional, and in the presence of others. It was really more of a group thing. He once tried to friend me on Facebook, and I did that thing where I never responded 'yes' or 'no.' Hoping — praying — that it would end. His behavior was completely appropriate at all times."

It's deeply obvious that Veep is riffing on the #MeToo movement and it could have went very wrong. But this feels like the right way — and maybe one of the only ways — to use the #MeToo movement for a joke. Veep never makes the movement, or the women and men behind it, the butt of the joke. The punchline is always undeniably Jonah, and his persistent creepiness.

Perhaps the goodwill that already exists among longtime fans of the show helps this joke succeed. It has always been about terrible, irredeemable personalities, and we know Veep isn't here to try and convince us that they're good people. This rings true here, as well.

Never does it feel like Veep is against these women coming forward against Jonah, or trying to send some message about whether actual real-life survivors should speak out. It doesn't feel that deep. It's just plain funny — an absurd development at Jonah's expense — and anyone who's watched his behavior over the past seven years will be delighted to see him in distress.

You will giggle at Jonah when reporters approach him on his front lawn and ask him how he feels after "thousands of women have joined #NotMe to say they have not dated you and never will." You'll groan as he digs himself an even deeper hole, saying those women are all unattractive, or perhaps might need to smile more.

#MeToo and the Time's Up movement never feel like something to laugh at. They've been real, meaningful, poignant presences in today's society, doing important work to hold powerful people accountable and lift up survivors' voices.Veep doesn't negate any of that when it embarks on this week's satire. Jonah is a gross, power-hungry, sexist man who needs to be taken down — Veep's version is just tackling this noble cause in a particularly unorthodox way.

More like this
The 'Kenan & Kel' Reunion On 'SNL' Took A Dramatic Turn, Thanks To Keke Palmer
By Brad Witter
Keke Palmer Just Announced She's "Going To Be A Mom" On 'SNL'
By Brad Witter
Theo James Revealed The Truth About His 'White Lotus' Nude Scene & Fans Can't Cope
By Stephanie Topacio Long
Everything To Know About 'The Peripheral's Potential Season 2
By Brad Witter
Get Even More From Bustle — Sign Up For The Newsletter