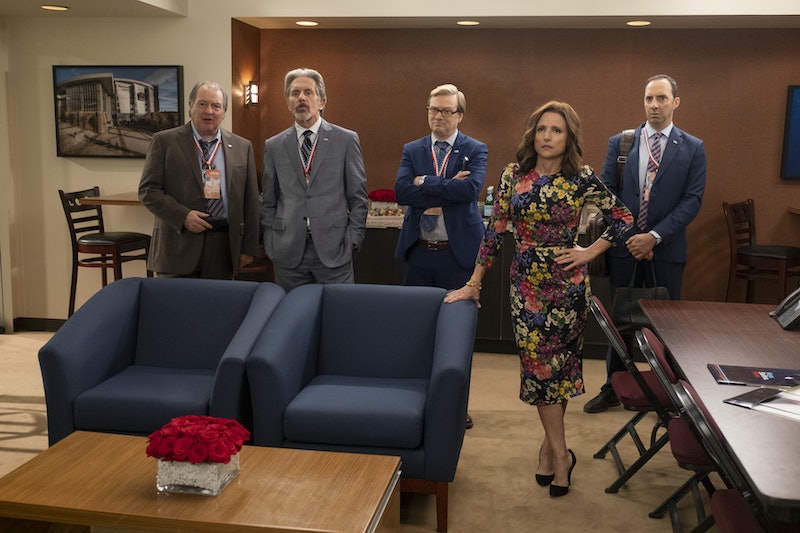 Spoilers ahead for Veep's final episode. As Veep neared closer and closer to its final credits, it felt like Selina Meyer couldn't possibly come out on the winning end of things. She was reaching for her party's presidential nomination, but surely the show wouldn't actually give this anti-hero a happy ending after seasons of torment, right? Well, turns out it's more complicated than that. The Veep series finale ending shows Selina returning to the Oval Office yet again as commander-in-chief, but after all the bridges she burned to get here, she's left to handle the job on her own.

Despite the fact that viewers have always known Selina is a terrible, narcissistic, irredeemable person, Veep's final hour really drives home how little she cares what happens to the people closest to her, so long as it brings her closer to what she wants. She truly dives off the deep end with every power-hungry, desperate move she makes, and the more desperate she becomes for the presidency, the more she unravels.

To name a few: she promises to abolish same-sex marriage in order to gain a few votes, regardless of the fact that she has a lesbian daughter who's raising a daughter with her wife. She lets Gary take the fall in the Meyer Fund scandal, allowing him to be whisked away by the FBI without a second thought, even after the years of sacrifices he's made for her. She lets Kent, her dedicated and loyal numbers man, walk away — he says he can’t support Jonah as VP, but the choice might bring Selina some votes, and that’s all she cares about. And she even burns Amy one last time by naming her the chief of staff for Vice President Jonah Ryan.

She wouldn't be anywhere without this team, and now they're gone. Selina at least used to have the common sense to keep valuable players close, but all that's gone out the window as she clings to the last shreds of power she can find. Viewers leave her in the Oval Office, for the last time, as she hopelessly looks around the empty room — no Kent to reassure her. No Amy to run damage control. No Catherine, still searching for her mother's acceptance. No Gary to make bring the right lipstick or the perfect cup of tea.

The show then jumps 24 years into the future, to Selina's funeral, and we see where everyone ends up once and for all. Let's see where Selina's inner circle landed in the end.

Selina is dead, and in true Selina fashion, no one truly knows what age she lived to. The news broadcast of her death reveals that she only ever serves one full term; her most notable moves were briefly freeing Tibet and permanently overturning same-sex marriage. We might have learned more, but the story of Tom Hanks' death at 88 years old is obviously deemed more important, and her funeral coverage is cut short. Whew.

Jonah is still married to his wife/step-sister/half-sister, Beth (played by the hilarious and underrated Emily Pendergast, who has absolutely killed that role). It's unclear exactly how his own political career turns out, but as Beth mentions, he's been impeached.

They're still alive and well, raising Little Richard in a fancy home, as it should be. Catherine apparently never repairs things with Selina — she giddily enters the room to watch her mother's funeral while touting a tray of celebratory margaritas.

Mike stuck with broadcast news, and is anchoring the main CBS coverage of Selina's funeral, even though he still can't quite remember what camera to look at. His toupee is top notch, though.

Richard has become President of the United States, just as I predicted, even though I did have the timing a little off. He's beloved, has served two terms, and has won the Nobel Prize. I always knew our lovely little weirdo would be on to great things.

Kent... doesn't look great! Selina's betrayal apparently broke him — he's got a long, scraggly beard with hair to match, and apparently works on a ranch and makes watches in his spare time.

We don't get much of a taste about what Amy's up to, but she is married to Bill Ericsson, who's apparently out of prison now, and they have many dogs.

To the surprise of absolutely no one, Dan ended up getting out of politics and becoming a sleazy real estate agent in Laguna Beach. He's also married to a lovely blonde woman about 30 years his junior.

Gary never receives a visit from Selina in prison, even though he takes the fall so she can succeed. But despite the horrifying mistreatment he suffered at her hands, Gary shows up at the funeral, and it's clear that he still might be the only one who has any real love for Selina. He notes that she'd hate the flowers they chose for the ceremony, and he brings her her favorite lipstick one last time.

The final moments of Veep are poignant and heartfelt, especially for a show that never threw around those tones without purpose. It lets Selina get what she wanted, at least for a little bit, but still shows she'll never be truly happy or respected. It's sad to see it go, but Veep delivered a rare, perfect finale that gave closure to all those characters we've loved to hate for seven seasons.

More like this
We Still Have A Few Unanswered Questions At The End Of 'The Suspect'
By Sophie McEvoy
'Inside Man' Was Inspired By 'Sherlock' In The Most Unexpected Way
By Catharina Cheung and Maxine Harrison
Mike Flanagan Teases 'The Midnight Club' In This Exclusive, Creepy Clip
By Grace Wehniainen
'The White Lotus' Season 2 Trailer Teases Multiple Affairs & Another Dead Body
By Bustle Editors
Get Even More From Bustle — Sign Up For The Newsletter