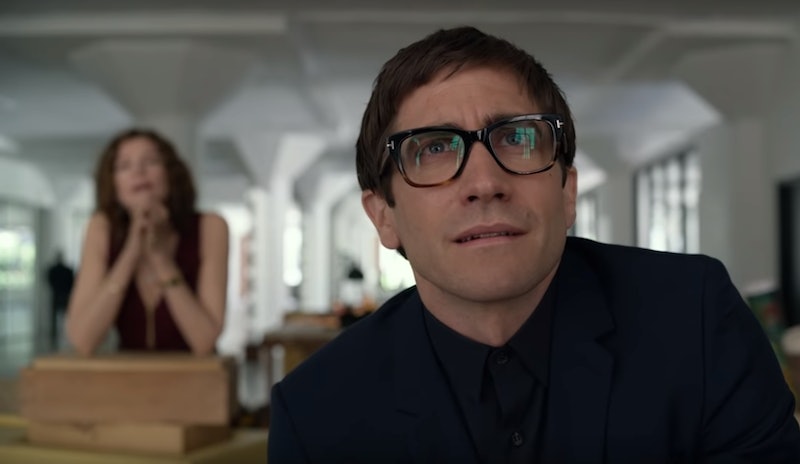 He's played characters ranging from an obsessive reporter to a boy who lived in a bubble, but Jake Gyllenhaal's Velvet Buzzsaw character may be one of his wildest ones yet. The Netflix movie, which is set to premiere on Feb. 1, is a dark look at what happens when people within the art world begin to take art for granted. Gyllenhaal plays the magnificently named Morf Vandewalt, a contemporary art critic who is unimpressed by everything he sees until a previously unknown artist's work is put on the market. The trailer suggests that's the moment that things get weird (and deadly) for Morf and his Los Angeles art scene cohorts.

Velvet Buzzsaw is directed by Dan Gilroy, who previously worked with Gyllenhaal on the 2014 film Nightcrawler. The duo created movie magic as Gilroy directed the Donnie Darko actor in one of his best performances as cameraman Louis Bloom. In Nightcrawler, Louis became more and more obsessed with getting the images from grisly crime scenes that his boss craved, and the gifted actor dug deep to truly display the grim corruption of Louis' work.

As Morf, Gyllenhaal will be dealing with themes that are reminiscent to the ones at the center of Nightcrawler. In a new interview with Vanity Fair, Gilroy said of Velvet Buzzsaw, "The idea that artists invest their souls in their work and it's more than a commodity — that has always interested me. I suddenly saw a way of incorporating it all, to explore how, when art and commerce are dangerously out of balance, bad things can happen."

For Morf, those bad things include the art he so passively critiques coming to life and attacking him and everyone he knows. Check out the trailer below, and prepare to be more than a little creeped out.

"There's some sort of power, some spirit, it's connected to his art," Gyllenhaal's Morf says in the trailer. "Something truly godd*mn strange is going on."

His reaction to seeing paintings come to life is in stark contrast to the detached critic viewers meet at the beginning of the trailer. Morf's so disenchanted with art that he doesn't see the value in any of it — and the same can be said of his colleagues. They all get a wake up call when a previously unknown artist who uses human blood in his work is discovered by an eager young member of the art community who takes the paintings from a dead man's home.

In addition to Gyllenhaal, the cast also includes Rene Russo, Toni Collette, John Malkovich, and Stranger Things' Natalia Dyer. There's no doubt that Gilroy has brought together a superb group of actors to tell what promises to be a unique story. But while the cast is stacked, it's Gyllenhaal's Morf who will be at the center of the film.

Gilroy explained to Vanity Fair that Gyllenhaal's "character is the protagonist who leads us through the film and he takes us deeper and deeper into a mystery that leads to a final shocking realization." Whatever that realization turns out to be, you can bet Gyllenhaal is the perfect actor to take viewers on this wild journey.