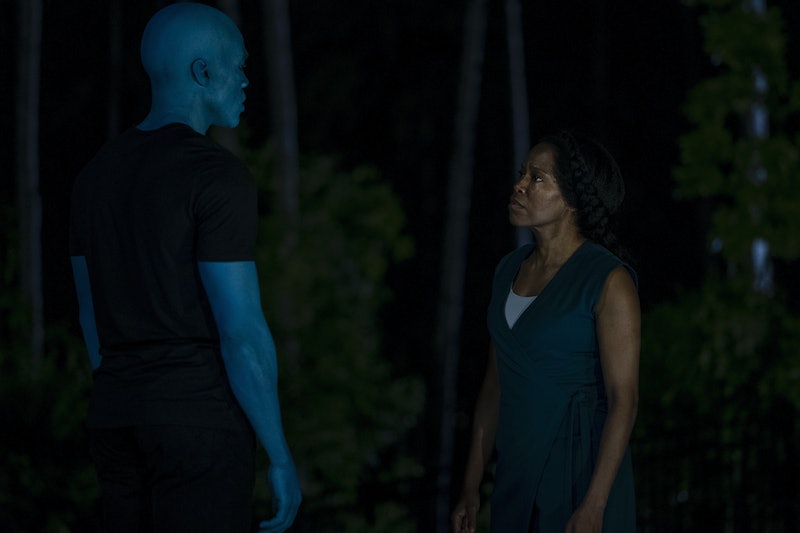 Spoilers ahead for Watchmen. According to Dr. Manhattan, "nothing ever ends"… but TV shows certainly have to. Some might run strong for over a decade (here's looking at your, Grey's Anatomy) and some might be designed to last only a season, like HBO's Watchmen. But they all end. Fortunately, the Watchmen Season 1 finale — or is that series finale? — provided plenty of answers to its lingering mysteries as it went out with a literal bang.

While HBO has yet to announce whether the series — which serves as a sequel to Alan Moore and Dave Gibbons' graphic novel of the same name — will return for a second season. Creator Damon Lindelof (Lost, The Leftovers) has made it clear that, even if the network does decide to renew the show for subsequent seasons, he wouldn't be involved. These nine episodes encapsulate the story he wanted to tell in its entirety. While there is potential for more adventures to take place in this compelling alternate universe, he ended his finale with a satisfying sense of closure, solving most mysteries while leaving enough threads dangling for someone else to pick up and run with if HBO decides they want more.

Here's where everyone ended up at the end of the season's final hour, "See How They Fly."

It turned out that Joe Keene's plan to turn himself into Dr. Manhattan was really a mask for Lady Trieu's own plan to turn herself into Dr. Manhattan. After using the 7th Kavalry to her own ends, Trieu used the Millennium Clock to destroy Manhattan and imbue herself with his powers. Unfortunately for Trieu, her plans literally came crashing down around her when Adrian Veidt, Laurie Blake, and Looking Glass teamed up to stop her. With the help of a frozen squid fall, the Millennium Clock was destroyed, burying Trieu underneath the rubble, seemingly before the transfer of powers was completed.

Yes, Trieu wanted to use Manhattan's powers to ostensibly noble ends: she planned to save humanity for good this time by destroying all nuclear weapons and fixing the planet. But Jon Osterman came by his powers accidentally and, as Veidt pointed out, anyone who actively seeks out that kind of power for themselves is a danger. Absolute power corrupts absolutely, and who knows what Trieu would have become in possession of such godlike abilities. Fortunately, we'll never find out. Unless…?

Rule #1 of television is that nobody is dead unless you see a body. If there is a Season 2, perhaps it could turn out that the transfer did complete just before the Clock landed on Trieu — or enough of it did to help her survive — and she'll return to complete her plan and exact vengeance on those who tried to stop her.

In the season's penultimate episode, which chronicled the relationship of Angela and Manhattan in time-skipping fashion, Manhattan warned his future wife on the night they met that their relationship would end in tragedy 10 years in the future. Shortly before being abducted by the 7th Kavalry, he also warned Angela that they would "destroy" him. Both of those warnings came true. After being teleported into a cage by the 7th Kavalry, he was disintegrated by the Millennium Clock as a grief-stricken Angela looked on.

So is that it for the man formerly known as Jon Osterman? Did Damon Lindelof really just kill off one of the most iconic characters of the original graphic novel? Probably — but again, a potential Season 2 might leave the door open for a surprising return. Note that Manhattan said "destroy" not "kill," and Osterman has been disintegrated twice before: once in the intrinsic field generator that gave him his powers, and once in the intrinsic field subtractor that Veidt tricked him into at the end of the graphic novel. Both times, Manhattan was able to reassemble himself.

If his essence didn't get entirely absorbed by Trieu, then might there be enough of his energy left out there for the powerful being to reassemble himself with? Maybe the hypothetical second season could be the Search For Spock of the Watchmen universe, as Angela searches for a way to bring her husband back.

"See How They Fly" put a definitive stop to the 7th Kavalry with surprising ease; after Keene's attempt to turn himself into Dr. Manhattan reduced the man to a puddle of bloody goo, Trieu dispatched the rest of the terrorist group and their wealthy backers with one zap of a laser gun. But just because the 7th Kavalry is gone doesn't mean white supremacy has been "defeated." Watchmen is too smart of a show to think that racism can be solved with a snap of the fingers.

Watchmen has always been a political story, with the graphic novel tackling the Cold War and the TV show tackling white supremacy in America. If it returns for Season 2, it will likely tackle yet another relevant sociopolitical or cultural theme; but it would also be nice if the show could take time to acknowledge that white supremacy still exists in this world. The 7th Kavalry may be gone, but what will rise to take its place?

When an imprisoned Manhattan zapped his former teammates back to Vedit's Antarctic palace, Karnak, they were forced to work together to figure out a way to stop Lady Trieu from carrying out her master plan. With the help of a well-timed — and well-frozen — squid fall, they brought the Millennium Clock down and averted catastrophe. But if you thought that saving the world would result in hugs and forgiveness between the colleagues-turned-enemies… well, Laurie quickly proved that assumption wrong.

30 years ago, Laurie was complicit in covering up the truth about Veidt's staged alien attack on New York City; she and the rest of the Minutemen stood by while Dr. Manhattan killed their teammate Rorschach rather than let him reveal the truth, and agreed to stay silent about Veidt's villainy in order to maintain the fragile peace he'd built. But Laurie isn't going to make the same mistake twice. After seeing what came of Veidt's manufactured peace — aka continued strife, violence, and death — she decided it was time at last for Veidt to answer for his crimes.

From prison on Europa to prison on Earth; would Veidt be a part of a potential Season 2? Or is that the end of his story? Would Season 2 reunite Laurie with her ex-boyfriend, Nite Owl, aka Dan Drieberg, the only surviving member of the Crimebusters not seen in Season 1?

For most of the season, Looking Glass served as a fun house mirror reflection of Rorschach, another hero who refused to take off his mask, lived a solitary life, and had a propensity for eating cold baked beans out of the can. But whereas Rorschach's rigid, unyielding ethos led to his death at the end of the graphic novel, Looking Glass' story ends on a more hopeful note. After decades spent hiding behind reflectatine, Wade discarded his signature mask at the end of Episode 5, adopting a Rorschach mask instead so he could infiltrate the 7th Kavalry. Once that mission was complete, he discarded that mask in turn, and spent the rest of the finale showing his true face.

Maybe seeing the place the giant squid came from helped heal Wade in a way simply seeing a video recording didn't. Maybe the taciturn police officer can finally start to move on after spending 30 years shielding himself from the trauma inflicted on him on 11/2. Without his Looking Glass persona, it's hard to imagine Wade factoring heavily into a potential second season. But if Season 1 sends at least one character off into a well-deserved happy ending, I'm glad Wade got it.

By far the biggest thread that Season 1 leaves dangling for a potential Season 2 is Angela, and the question of whether or not Dr. Manhattan truly left her his powers. After witnessing her husband disintegrated in front of her eyes, watching his killer crushed beneath her own ambition, and reconciling with her grandfather, Angela returned home alone. There, she remembered what Manhattan told her 10 years before, about being able to transfer his powers to another human inside organic matter — like an egg. She looked at the eggs she'd smashed earlier that night, found one still intact, and consumed it. She headed out to the pool to see if she could walk on water like Manhattan, and… roll credits.

Was that just wishful thinking on Angela's part? Or did Cal really leave his wife his powers inside an egg? Is Angela the new Dr. Manhattan? If so, I'm going to need a Season 2 now please.

If there's one disappointing thing about the finale, it's that it didn't answer the single most bizarre mystery of the season: who is Lube Man?? However, while the answer wasn't on the screen, the show might have provided the answer in a different form. Throughout the season, HBO has been releasing supplemental files on a site titled "Peteypedia," in the form of memos, news clippings, and transcripts written and compiled by Agent Petey, the FBI agent who accompanied Laurie Blake to Tulsa. In the most recent entry, Petey went in-depth on the novel Fogdancing, which can be seen in various places throughout the season.

According to this supplemental material, the fictional novel tells the story of soldiers called "fogdancers" who do the clean-up work after the Vietnam war, wearing special protective gear to shield themselves against the poison gas and toxic detritus left behind in the jungle. That special gear? A "skin-tight silver suit shimmering with with SPF-666, looking slick and doing what must be done, in secret, to keep you and me and all of us free." Petey goes on to talk about how influential the novel was for him, and reflects on how Laurie told him that "masked vigilantes often get two origin stories in life. The identity that circumstances create for you, and the one you choose for yourself." He ends the memo by saying, "Perhaps the same can be true for me."

Angela took inspiration from an influential piece of media from her childhood when adopting her masked vigilante persona of Sister Night. Has Agent Petey done the same, adopting the look of a fogdancer of the main character from his favorite book? Fans might have to wait until Season 2 for official confirmation, but this is one theory that feels like a near certainty.

Even if Watchmen doesn't return for Season 2, the finale answered enough questions that fans should be satisfied. But there is plenty left to be explored if HBO, like Dr. Manhattan, should decide that nothing ever ends…

More like this
'The Last Of Us' Has Revived The Inspirational "Hopepunk" Trend
By Sophie McEvoy
'The Last Of Us' Video Game Revealed Tess’ Fate In The HBO Series
By Brad Witter
The Song At The End Of 'The Last Of Us' Ep 1 Has A Deeper Meaning
By Sophie McEvoy
Wait, Is Barney Stinson Related To Sophie On 'HIMYF'?
By Gretchen Smail
Get Even More From Bustle — Sign Up For The Newsletter
From hair trends to relationship advice, our daily newsletter has everything you need to sound like a person who’s on TikTok, even if you aren’t.